A Feathered River Across the Sky: The Passenger Pigeon’s Flight to Extinction 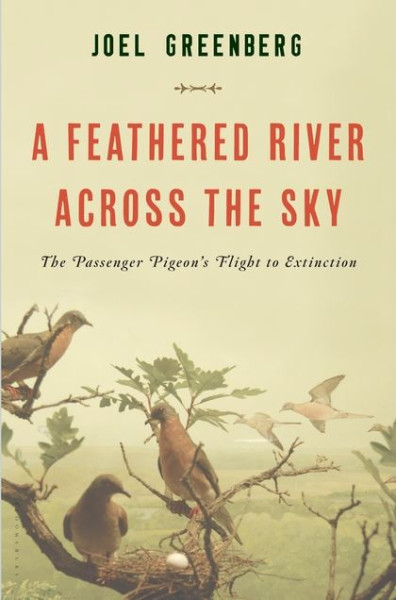 A Feathered River Across the Sky: The Passenger Pigeon’s Flight to Extinction by Joel Greenberg was published in 2014, the centenary of the pigeon’s extinction. Over a billion pigeons flew over Toronto in May of 1860, yet by 1914 only one was left in the world. Ever since Europeans landed in North America they have been both in awe of as well as at war with the passenger pigeon. I do not cry at movies and rarely when I read a book, but I do get misty-eyed when I hear about language death or when I read about the extinction of a species. The kakapo might still be saved yet the passenger pigeon, whose peak population may safely be estimated at the low end to number at least three billion, has been silenced from the skies.

In the last fifty years of the species’ life the population fell from one billion to none. This seems unbelievable. So much of what Greenberg wrote was prefaced by similar phrases. How could a billion birds dwindle down to zero in only fifty years? The birds’ enormous population was their downfall. No one would ever have imagined that the pigeon population would someday diminish when there were millions upon millions of them:

“As amazing as was the abundance of the pigeons, the litany of slaughter dominates the history of this species. People killed them in virtually every way imaginable and for many reasons. And at times, seemingly for no reason at all.”

It is not enough that the passenger pigeon succumbed to extinction that is tragic. As Greenberg wrote about the decline of the species into the early twentieth century, the hunting never stopped. Author Edward Howe Forbush wrote:

“From soon after the first occupancy of New England by the whites until about the year 1895, the netting of the Passenger Pigeon in North America never ceased. Thousands of nets were spread all along the Atlantic seaboards” (italics his).

As long as the birds continued to blacken the sky and eclipse the sun for hours (John James Audubon reported one such migration that blackened the sky for three straight days) then hunters saw the pigeon numbers as limitless. Greenberg quoted C. W. Webber who wrote in 1854:

“Is it a tornado coming? What a deep veiled roar!…The full burst of the deafening volume of that vast sound is borne upon you overwhelmingly with a current of fresh air strong enough to swerve you in the saddle. They are over us! We pause in speechless amazement. Half the sky is obscured…When will it cease? Is it one of the everlasting floods? We gaze until the real night is gathering around us.”

A visitor to a nesting site in Wisconsin wrote in 1871:

“And then arose a roar, compared with which all previous noises ever heard are but lullabies, and which caused more than one of the expectant and excited party to drop their guns, and seek shelter behind and beneath the nearest trees. The sound was condensed terror. Imagine a thousand threshing machines running under full headway, with an equal quota of railroad trains passing through covered bridges–imagine these massed into a single flock, and you probably have a faint conception of the terrific roar following the monstrous black cloud of pigeons as they passed in rapid flight in the gray light of morning, a few feet before our faces.”

Greenberg quoted many other impressions when the cyclone of pigeons was heard in the distance, and then of the cacophonous racket when they flew overhead. I can say honestly that if I had a chance to go back in time to live through any event in history, I often wish that I could see a passenger pigeon migration.

The pigeons made their home in the greatest concentrations in Wisconsin, Michigan, Indiana, Ohio, Pennsylvania, New York and the five small New England states. Southern Ontario was also a prime location and Toronto is mentioned throughout A Feathered River:

“A couple of decades later in York, Ontario (now Toronto), the arrival of the pigeons triggered another outburst of orgiastic firing. For several days, the city took on the character of a war zone, with the nonstop cacophony of discharging firearms resounding everywhere. Police attempted to enforce the ordinance banning the use of guns within the city, but it proved impossible given the sheer numbers of transgressors, including those of such high status as city council members, crown lawyers, and even the county sheriff. The forces of law and order capitulated. ‘It was found that pigeons, flying within easy shot, were a temptation too strong for human virtue to withstand.'”

“The name of Mimico, a Toronto suburb, derives from the nineteenth-century Mississauga word, omiimiikaa, denoting a place where wild pigeons gather.”

Even when the flocks were reduced to the hundreds, and even in single-digit gatherings, the birds were preyed upon. How do you go from millions of birds in one year and then a minuscule fraction the next? Answer: slaughter them during the last massive nesting site as in Petoskey, Michigan in 1878. With the population no longer sustainable to survive, they were doomed. Very few eggs hatched in the coming years:

“From 1870 to 1882 was a critical period in the history of the passenger pigeon. What happened in those years made the bird’s extinction inevitable. In 1871, the largest nesting on record occurred, but 1878 saw the final attempt of the birds to breed in vast numbers. Four years after that, the last nesting attempts of any size numbered at most a few or so million birds. By then, there were probably not enough living passenger pigeons to have kept the species going for long even if they had been allowed to breed. But, if anything, these remnants encountered even more ferocious exploitation, and so their efforts to reproduce became virtually futile.”

The pigeons were targets for a number of reasons: they were a cheap and easy food supply, for one. Who hasn’t chuckled while watching cartoons hearing of “pigeon pie”? The pigeons, when the massive flocks roosted, were also known to leave complete destruction:

“Their sheer volume imposed severe damage on the trees that supported them, sometimes making the timber valueless. Walter Rader, who grew up on a farm in Monroe County, Indiana, in the 1860s, recalled hearing the nightly crash of breaking limbs from a pigeon roost in a nearby maple grove.”

Pigeons fed on acorns and beechnuts but were also known to feed on grain and freshly-sown seed. Farmers looked at the pigeons in the same way as they saw a plague of locusts. The killing however never stopped, even when the massive flocks ceased to darken the sky. By 1900 the pigeon was virtually extinct in the wild. Greenberg documented the last birds of the species from the start of the twentieth century. The last wild pigeon was shot in 1902, leaving three flocks in captivity. The last birds of the species were not treated with respect even in death. Time after time Greenberg wrote about the disposal–in the trash–of some of the last birds. The second-last bird, a male, died on July 10, 1910. His gravesite was the trashcan. Martha lived alone for four years as the last of her species:

“It is easy to become anthropomorphic about Martha’s situation as the idea of impending aloneness so absolute is heart-rending, especially in light of what had been such a short time before.”

I fully agree. How could visitors to the Cincinnati Zoo, where Martha lived, not gaze in awe and sadness at her? Instead, visitors threw sand at her cage in an attempt to make her move. Martha died on September 1, 1914, marking one of the few occasions where we have an exact date of a species’ extinction.

How times have changed. Conservation efforts were in their infancy in the late nineteenth century. Well-meaning legislation to save the passenger pigeon was ineffective as the pigeon population was already mortally low. We have conservation protection of animals and the environment now, and the roots of these preservation measures all go back to those few who rallied to save the passenger pigeon.

I found two errors in the book: one misspells the actor’s surname as Donald Pleasance instead of Pleasence; and a subchapter is entitled “Stilled Wings: The New Millennium and the End of the Passenger Pigeon as a Creature of the Sky”. We all know that the passenger pigeon never made it to the new millennium. Greenberg obviously meant to write “The New Century“.