A Lady of Letters 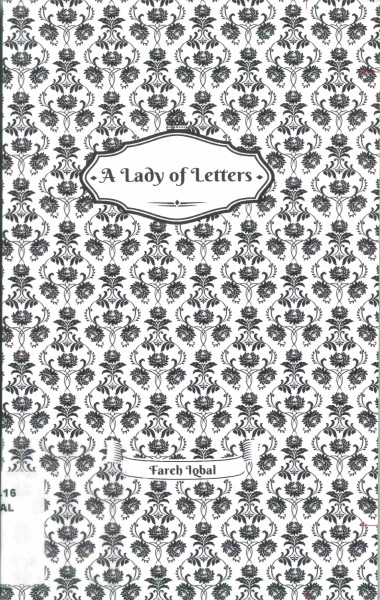 Everything stopped for tea as I read A Lady of Letters, the second collection of poetry by Fareh Iqbal. This collection follows About a Girl which came out in 2016. In the first review for this book posted to the Canadian Amazon site, the reviewer said that she (or he) “sat with a cup of tea and throughly [sic] enjoyed every poem”. I feel that the reviewer did herself a disservice, as poems are meant to be savoured and reread. As with my read of About a Girl, I genuinely read every poem in A Lady of Letters multiple times before I advanced to the next. That is the reason I spent two days with this collection as I never like to rush my reads. But then perhaps the Amazon reviewer was already familiar with this work and could get through it all with merely a guzzle of Earl Grey.

In this new collection the poems are shorter and a wider variety of vocabulary was employed in order to create these poetic paintings. In my notes I wrote down the pagination for seven poems that struck me as particularly impressive. So few of the poems had titles–not a fault within poesy–that I am left to identify them by their page numbers alone. Iqbal has a profound gift for simile and evocative imagery, and I enjoyed the poem on p. 29:

The dappled sunlight
rippled across her skin
like waves of caramel
reaching for
his familiar golden shore.

Yet by the time I got to p. 63 the dappled sunlight returned, turning it into a hackneyed cliché:

Tinted skies
dappled sunlight
and the caress
of the summer wind
…

In About a Girl, I remarked upon Iqbal’s overuse of the verb entwine and the noun or verb dust. Thankfully these words were used sparingly in A Lady of Letters. I only found entwined used in the poems found on pp. 21 and 25. So my eyes caught dappled sunlight like a starving fish catches bait. Imagery suggested by honey was abundant, but not enough to overflow the hive.

I was awed by the pastiche of colour and sentiment in the poem on p. 17:

She captured his soul
and poured it
into the ink
that stained her paper
hues of grey
and shades of pink.

Iqbal’s imagery shines in the poem on p. 59:

She moved like a broken puppet
fragmented appendages
wrapped in flesh
held together
by frayed string
bound by good intentions.

I enjoyed Iqbal’s capacity to dig the knife in deep, and the poem on p. 51 evokes the cynical:

It was elementary
to see through him
for she knew
precisely where to look.

Since this poet has heeded some of my editorial advice by reprinting all four of her novels, I wonder if she would appreciate the following editorial notations. A flawless manuscript is an impressive canvas showcasing one’s personal work of art. I was indeed impressed with the poems in A Lady of Letters. I would be even more so, and willing to up my starred reviews on-line , if the following corrections were made:

The noun reminiscences is required here, not the verb reminisces.

Aarrghh! If him is in the accusative case, then I should be me. I am sorry to say that when I encounter a grammatical error such as this, then the preposition betwixt suddenly seems pretentious when we all know that between could have sufficed.

Calm thy expectations
as you gaze wistfully
towards the dawn
… (p. 76)

My bugaboo from About a Girl was Iqbal juggling between the inflections of you and thou within the same poem. Why not write Calm your expectations… instead of mixing up thy with you?

Please reprint both poetry collections so that they feature the title on the spine. Library browsers have no interest in books they cannot identify on the stacks.

I couldn’t help but see a bit of my own Trumpian ego reflected in the poem from p. 101. I enjoyed A Lady of Letters and I gained enhanced appreciation for all of the poems when I allowed myself the time to savour the effect of their words after multiple reads.