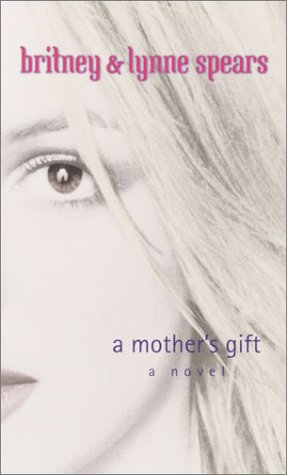 Following the abhorrent My True Hidden Hollywood Story, I could not satisfy my gluttony for punishment and sought another trashy read. Truth is, I had been curious about the novel A Mother’s Gift by Britney & Lynne Spears for a little while and decided, that since I was so close to near-death after reading the Brenda Dickson memoir that I might as well finish myself off with the Spears’ attempt at coauthored fiction. This novel from 2001 is about fourteen-year-old Holly Faye Lovell, an aspiring singer from Mississippi who auditions to gain enrolment in a prestigious school for the performing arts. Lurking in the background is an open secret that everyone in her small town seems to know–everyone except Holly, that is. By the end of the book it was easy to figure out what the secret was. 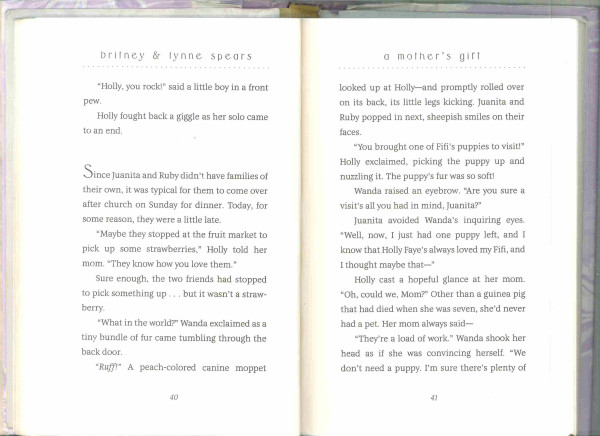 …but who am I to criticize, really, since book snobs like me can hardly be counted as the target audience for this work, and if it gets teens reading, then go for it.

All that won’t stop me from giving my opinion on a weak storyline with no character development at all. The secret that is finally revealed is a ho-hum, who cares event. The protagonist is a goody-two-shoes little Miss Sandra Dee whose best friend she enjoys hanging out with is her own mother. What fourteen-year-old girl would rather stay at home each and every Friday night with mom when she could be out on a date? Holly’s boyfriend seems to accept this. If I were straight I’d probably dump her.

One of the problems, perhaps, in having two credited authors is that little details get missed, as the puppy Holly’s mother adopts switches its sex throughout the book. The dog is introduced as a male, referred to numerous times as “he”, then when it is finally given a name, she’s called Princess, then again it is referenced as a male. More likely this is a result of inattentive editing, as I don’t believe for a moment that Britney herself had any role in contributing to this novel, however Lynne is likely literate since her bio on the inside flap says that she used to be a schoolteacher. The book also promises the reader:

“This is Britney and Lynne’s first–but definitely not their last–work of fiction together.”

It’s been thirteen years since A Mother’s Gift yet no further novels have appeared. I suspect that in the meantime Britney has learned to read and write. Put this book in the same pile of merchandising novels-for-hire as Snooki’s A Shore Thing and Nicole Richie’s The Truth About Diamonds.