A Young Man’s Memoirs on His Escape from South Korea 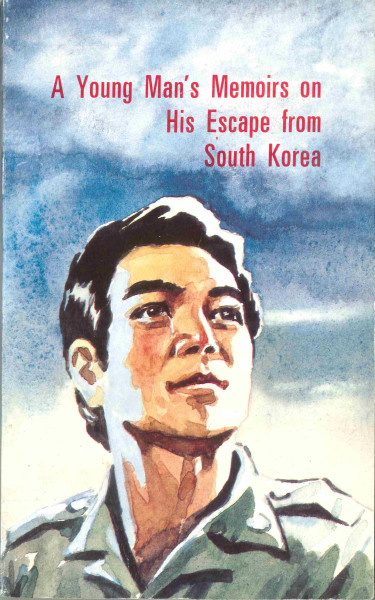 I picked up A Young Man’s Memoirs on His Escape from South Korea by Kim Yong Son when I visited the DPRK in 2011. When I show this to others they sometimes read the title as an escape memoir from North Korea. I have had to ask my friends to read the title once again. The subject matter is entirely predictable–about a disillusioned victimized capitalist and his endless tales of woe while living in the hellish southern Republic of Korea–and the reader must struggle at times with how loudly he will guffaw with laughter when reading it in a public place.

For readers of North Korean propaganda literature–and I have read and reviewed a lot of it–nothing I encountered in this faux memoir was new. Young student Yong Son worries if he will be able to continue school year after year due to the ever-increasing fees and endless additional charges. And once he gets to school, he must worry about classmates such as Chang Sol, who had been raised to be a spy since childhood. Even his chewing gum is the enemy:

“I turned my eyes unwittingly on Chang Sol who was sitting at a desk by the window, chewing Canadian gum.”

The English in many of the works I bought in North Korea was poorly translated. The most common error, which I have reported in my past book reviews, is the tendency when going from Korean to English to leave out the definite or indefinite article, or to write one article when the other one is more suitable. This makes for stilted reading and I always had to read sentences over again. Some English renderings were hilariously contrived. A Young Man’s Memoirs was written in 1984 (yet published in 1989) but no English speaker would have ever described an attractive young woman like this:

“And this young lady, Sun I here, dressed gracefully in white like a swan on a lake has appeared on the campus as a star. She is the talk of male society for her simple and modest character and her strong sense of justice.”

Throughout this memoir South Korea (always rendered as south Korea, with a lowercase s, of course) is painted as a hellish wasteland populated by prostitutes and thieves. Trumpish money-grubbers extort higher tuition fees and Yong Son’s parents are worked to the bone to try to earn enough to keep their son in school. Yong Son’s mother has a miserable expression throughout the book while his father injures himself in a mining accident. In order to raise funds for Yong Son’s tuition and her father’s medication, his sister Yong Ok whores her dignity in flitting from cleaning job to cleaning job, eventually hooking up with a millionaire family whose decadent lifestyle as clotheshorses certainly kept the local tailors busy:

“The capitalist lived at the height of luxury and debauchery. All the members of his family changed their clothes 30 times on average every day, it was said.”

Yong Ok’s salary kept Kim in school yet their father never recovers. It grew to be a running joke throughout the memoir how Mr. Kim would be eternally lying in pain. Every time Yong Son returned home, sometimes after being away for years, his father would still be moaning while lying flat-out on the floor. I mean, take him to a hospital or do something! Yet the propaganda dictates that the Kims are too poor even to afford the most minimal health care and that South Korean society is so heartless not to care for its own people.

When Yong Ok’s millionaire boss moves to Brazil, taking all of his domestic help with him, Yong Ok couldn’t get out of South Korea fast enough. Yong Son paints a nightmarish picture of his home country:

“South Korea really is a hell on earth and a prison without roof. It is no exaggeration that people say that although they are living at their home, they have one of their legs in the prison.”

“South Korea, where men are treated as commodities and, further, as beasts, was truly a burial ground for human beings.”

“I shall be very happy if you reader understand from my humble memoirs that south Korea is a land of darkness unfit for human habitation.”

The anti-American propaganda is turned up in a memoir such as this, and the occupying Yankees are blamed for all of the Kim family’s misfortunes, from the destruction of Yong Son’s cart:

“One day my cart, which I had left by the roadside, was hit by a US army truck and smashed to pieces.”

to the death of his own mother:

“A GI truck which was racing madly along the road hit my mother and mortally wounded her.”

As Yong Son’s life spirals downward he turns to stealing food. He finds out that there is a nationwide system of food-stealing gangs. He is also arrested for taking part in a demonstration, only to discover that the authorities have no common decency when locking everyone up for the night:

“The ‘protection room’ packed with breathing human beings had its own way of life. There were people lying about in disorder regardless of sex with their buttocks touching each other.”

The end of the memoir finds Yong Son drafted into the army and stationed near the DMZ. He is torn with indecision when he approaches the truce line:

“What shall I do? Which way should I take on the forked road of life and death?”

Yet we know what path he chooses, as the answer is written in the stars, quite literally:

“There’s a reason why the Milky Way has turned brighter of late. It’s all because the noble minds of the great General Kim Il Sung and Mr. Kim Jong Il in the north are reflected in the sky.”

Once Yong Son devises a way to escape to the North, he risks death by enemy fire to cross the DMZ. While recovering in a Northern hospital, the first thing out of his mouth is “Is this north Korea?” to which a pretty nurse (of course) answers, amping up the propaganda:

Tears of joy rolled down his cheeks and all his worries melted away. Yong Son can live his life in peace and prosperity and he leaves the reader with the following impassioned boast:

“What I want to emphasize in concluding this book is that north Korea is the blessed land looked up as a garden of Eden by the south Korean people.”