The hit of Stockholm is undoubtedly ABBA The Museum, or the ABBA Museum as everyone here calls it. Opened in 2013, it draws huge crowds and charges an exorbitant 250 SEK entry. It was worth the cost of admission. When I got there I noticed an enormous ABBA photo op outside the entrance: life-size paintings of each band member with his or her head on a tiny hinged door. You could take a picture of the original band or open a door and substitute your own head and pretend to be a band member. I was so preoccupied with this painting and the people posing with it that I failed to notice the long lineup to get into the museum. Sheesh! Who’d have thought there’d be a lineup? Had I a printer or a cellphone I would have bought my ticket in advance and presented it as soon as I got there. There was a separate lineup (with no one in it) for those who had prepurchased museum tickets.

It was a lengthy wait to get in but not an unpleasant one. Everyone in line loved ABBA, and a group of Brits about my age in front of me were singing ABBA songs and reliving ABBA memories. They were in such a jovial mood and it was infectious. The slogan on the museum doors is “Walk in. Dance out.” and people were partying in line before being even let in.

I was hoping to spend some of my Swedish kronor so I was disappointed to find out the museum was a cash-free facility. They only took credit or debit cards. This payment arrangement was not news to me, as I had read that some Swedish establishments operated entirely cash-free. I also spent 20 SEK on an English audio guide which was really worth it: all four ABBA members offered commentaries in addition to the descriptions you read beside every exhibit. Anni-Frid, Benny, Björn and Agnetha all spoke at length about their early lives as children, their musical careers before ABBA, their marriages, children and divorces, and the dissolution of the group and their lives after. There were audio guides in many languages (Swedish, English, Russian, German, French, Spanish, Japanese, Polish, Chinese, Italian, Finnish and Dutch) and aside from Swedish and English, I don’t suppose the four ABBA members would have narrated any of the others. I’d be interested in finding out which ones they do narrate (and it’s not necessary that all four narrate in the same language). I wrote to the museum to ask this question and they confirmed–as I suspected–that the ABBA members only narrated the Swedish and English guides.

I was excited to finally be inside but disappointed by the way the museum began: not with the genesis of ABBA, but with a whole tribute to the musical and movie “Mamma Mia”. I understand why the curators may have wanted to start with the most recent incarnation or representation of ABBA’s music, but ABBA fan that I am, I am not at all interested in “Mamma Mia” whether a musical or film. I hurried through the exhibits showing movie props and costumes that the actors wore and then went into a standing-only movie theatre where a short film was compiled showing ABBA mania. I chose to sit on the floor like some guests in order to get a fuller view of the floor-to-ceiling screen. Now this put me in the mood for the ABBA museum experience.

The next room was devoted to the early days of each ABBA member. Childhood photos and early music clips played in enthralling loops. How I loved to see and hear Frida and Agnetha’s pop songs when they were just embarking on their careers. Fortunately for me, these songs were available for purchase in the gift shop after. More on that later. Björn and Benny were each part of separate bands and their individual exhibits featured posters and mementos from their first gigs and film clips of very young shaggy-haired Hootenanny Singers and Hep Stars. 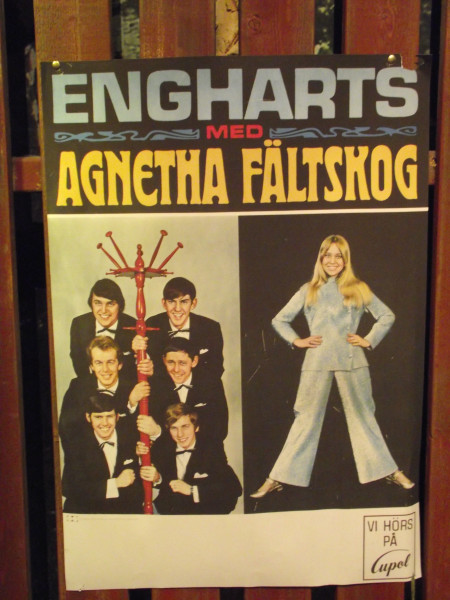 The evolution of ABBA followed. They first attempted to represent Sweden in Eurovision in 1973 with the song “Ring Ring”. It failed to win as Sweden’s entry in the song contest (coming in third) but it was nonetheless a huge hit. ABBA’s history as an international band began with their 1974 Eurovision win with “Waterloo”. On display were actual Eurovision first place medals and all four outfits the band wore when they appeared on Eurovision. Accompanying all this was a lengthy clip of their Eurovision appearance. I was pleased that the audio guides were not inaudible with all the ABBA music being played in the background. After all, you can’t have an ABBA museum with no ABBA music as the soundtrack as you walked through. For those of us with audio guides (a large minority had them) we could still hear the commentaries clearly.

The clothes ABBA wore on Eurovision when they won in 1974 with “Waterloo”: 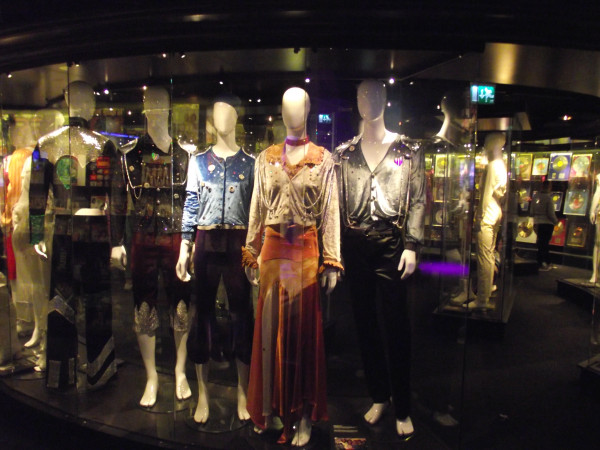 ABBA mania led to world tours and more hit singles and albums. There was a curved wall full of international album and single releases, and gold and platinum awards from countries all over the world. This awards wall was repeated at the very end of the museum to document the successful careers of Frida and Agnetha as well as for Benny and Björn’s careers as composers. In the middle of the wall of ABBA vinyl was a wardrobe museum showing the outfits they wore on various tours and for video or promotional clips. I was not as impressed with Benny and Björn’s outfits as I was with Frida and Agnetha’s. The men of ABBA did not dress like Elton John, after all. Sure they did glam it up as this was Europe in the seventies but the focus of ABBA has always been Frida and Agnetha.

One exhibit showed memorabilia and more wardrobe from their world tours. I always took photos of the Canadian connections, and those photos are below: 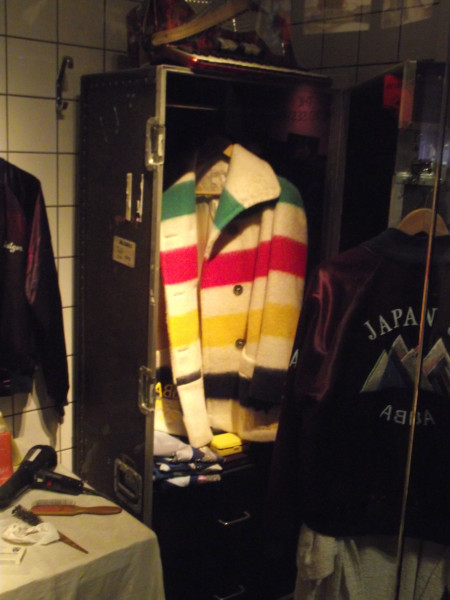 A Hudson’s Bay coat from Vancouver during their 1979 tour 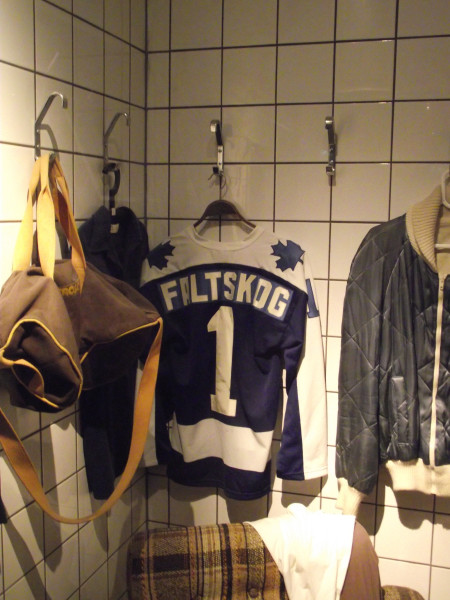 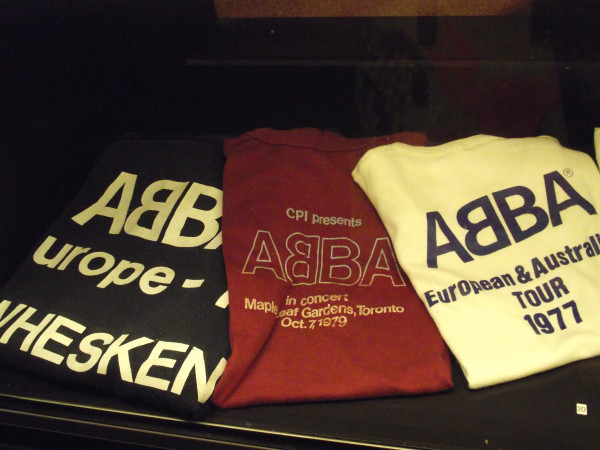 Souvenir T-shirt from the Toronto concert on 7 October 1979 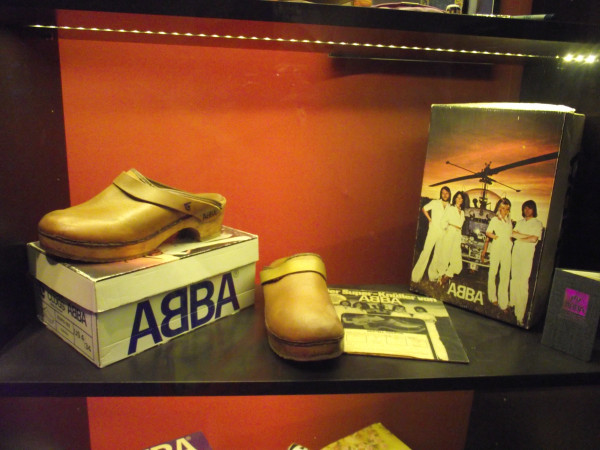 From the memorabilia cabinets: who didn’t want to wear a pair of ABBA clogs?

I am not a fan of interactive museums. I am old school in that I like to see exhibits and read about them, not engage with them. Interaction is what people expect nowadays so I looked in on, but did not participate in the chance to dress up as an ABBA member and make a video, or get up on stage and perform with the band, mix a song or pose in the Arrival helicopter: The museum paid tribute to those who helped make the ABBA sound with exhibits explaining the ins and outs of the recording studio, sound mixing and video direction. It was touching to see the musicians behind the scenes get their dues and tribute paid to those who are no longer with us. Director Lasse Hallström appeared in an exhibit about making videos with the band–or promotional film clips as they were called back then. Agnetha has given few interviews in English because she is so afraid of her language competence. Her candour in all of these interview clips and audio accompaniments was strikingly luminous. Granted, she would have had a coach review what she wanted to say and help guide her monologue in the audio guides, yet the revelations about her on-screen insecurity were new to me. Agnetha, such a beautiful woman whom every girl envied and every young man desired, was so unsure of herself in front of the camera. She admitted that she nevertheless enjoyed being on film, yet was always so appalled at the way she ended up looking afterward. She commended Lasse for his direction in making her happy with the finished product. In one closing exhibit, where all four members talked about their lives today (thus these clips are already six years old if they haven’t been updated) Agnetha said that she sometimes feels down on herself. She has learned to snap out of the doldrums by listening to her own ABBA music, especially to songs she was extremely proud of. She immediately remembers how happy she was forty-some years ago when she made her best music, and that shows that it’s not just the fans who get so much joy from their music: so does Agnetha.

A hauntingly lifelike statue of ABBA was the final exhibit. It was eerie to see how exact it was. People were posing with it and I had to wait my turn to get a clear shot: I predicted that the gift shop would be expensive and I was not surprised to see the high prices. Nevertheless I could not pass up getting The ABBA Guide to Stockholm, a 161-page book about the group’s connection to the city, available only at the museum (I will write a blog post about all the books I bought on this vacation in detail with scanned covers), plus three CD’s: before ABBA (a single disc containing all the music I fell in love with at the beginning of the museum), after ABBA (a double CD of highlights from the members’ solo careers) and the deluxe version of Agnetha’s latest CD/DVD combo, the simply-entitled A. Both of the ABBA albums were exclusive to the museum and could not be purchased elsewhere.

I didn’t exactly dance out of the museum, but I was happily singing out loud. I haven’t stopped. Really, ABBA has been on my mind and I relive the museum experience constantly.