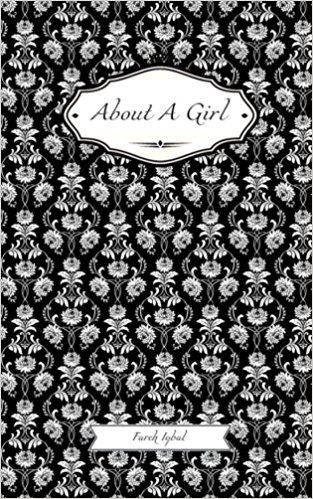 About a Girl is Fareh Iqbal’s first collection of poetry, coming after a rapid succession of four novels. Poetry should never be read as an exercise in turning pages, for work like this needs to be reread. Poetry is savoured upon subsequent rereads. I can confidently say that I must have read each poem in About a Girl four times over before I advanced to the next one. Iqbal covered love, desire, longing, and nature among the standard themes in her poems. I was moved most by the poem entitled “Laced Mandolin” on page 23:

Mandolin, Mandolin
laced with paper dreams
and shredded hearts
frayed at the seams.
You sing of whisky nights
empty fights,
and the long hours in between.
Lost in a lullaby
of yesterday’s blues,
the years slip by
in a ballad of forgotten youth.

Music is the underlying theme in this poem, and beyond the obvious references to Mandolin, sing, lullaby, blues and ballad, Iqbal employed terms that also have a specific musical context, such as shredded and frayed. The rhymes and near rhymes flow well together.

I also liked the following untitled poem on page 35:

She brings the music
but he is
deaf
to her melody
and his heart
blind
to her aid
preferring to remain
an impervious audience
to her saviour’s serenade.

Iqbal can twist the knife as well as she can wax romantic in this untitled work on page 31:

This useless endeavor
your careless silence
the uncertainty of your mind
nurtures my contempt,
precariously treading on the fine line
between love and hate
manifested solely
by your cold indifference.

The minimalism in poetic expression tripped up in this untitled poem on page 56. It is awkward to start a poem with the introductory There is… as in:

There is thunder,
raging chaos
inside your mortal shell.

I recommend the first stanza start off with the word Thunder, instead of being relegated to third place after two useless words of introduction. Iqbal also hit the reader with the poetic punch of There is… at the start of the poem “A Song in the Distance” on page 101. This was even more egregious since the first line:

There is a song in the distance.

followed the title of the same name. One of the holy commandments of poetry is: “Never start a line with There is…” Such a line is also featured in (but fortunately not the opening of) “Desperate Times” on the following page:

There is madness in the air tonight, my friend,

The poem “What a Pity” is translated into French as “Quel Dommage”, but there were many errors in the translation. Iqbal’s own command of French–or the substandard on-line translation tool she used–should have been looked over by a native speaker or at least someone fluent in the language. This is not the first time I am saying this about Iqbal’s French. I found two errors in a single line:

Poetry written in French exudes a romantic quality of dreams and passion. This effect is ruined when the French eye passes over mistake after mistake, as well as one line which made no sense at all:

What was Iqbal even trying to say? I (tried to) read the French poem first, then only when I got to the end I saw that an English translation was on the facing page. Thank goodness. Was Iqbal trying to be ironic with a line like that?

Two words which I felt were overused throughout this collection were variations of the verb entwine and the noun or verb dust. Readers of my reviews of Iqbal’s four novels know that I had a bug in my ear about her overuse of the verb sigh. It is tiring to see the same vocabulary over and over, especially in poetry, where the dictionary is your canvas, so let the paintbrush fly. Iqbal’s poems are punctuated by an excess of these two terms, and just when I thought I had encountered the last of them I found both entwined and dusted in the same poem, “Companion” on page 118.

I am afraid that as with all four of Iqbal’s preceding novels. this poetry collection was not edited, otherwise the spelling error of the adjective dependant [sic] in the untitled poem on page 114 would have been caught. It is dependent. The second person singular possessive thy and its accusative thee are used throughout the poems, yet never its subject thou. Iqbal mixes the forms in “Mercy” on page 109, and it reads rather clumsily:

upon my soul You have placed too heavy a
burden,
I beg for Thy mercy to release me now

I would like to ask the poet why Thou wasn’t used in the first line over You. And she could have rhymed Thou with now!

Autobiography underlies these poems and in the untitled poem on page 119, the subject–who I am sure is Iqbal herself–finds refuge and comfort in composition during a restless night. She finds peace through her writing, and has blessed us with this collection of poems.

Iqbal has revealed her fine virtuosity in expanding her written oeuvre. I would be proud of this debut collection of poetry. My only other concern is that without the book’s title printed on the spine, it will sit on the library shelves unknown and unseen. Browsers do not take out books which do not have their titles on their spines. People who know about this book in advance and are in search of it will find it, but lack of a spine title is a browser’s kiss of death.