Absinthe: History in a Bottle 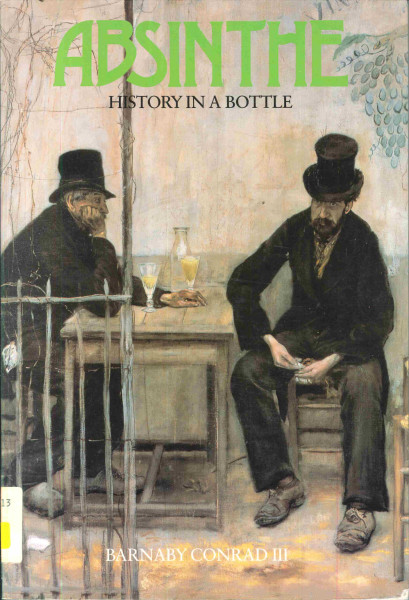 I first heard about absinthe, not as a Scrabble SATINE steal, but in high school during art history class. I later encountered absinthe, not through romps in clandestine Swiss distilleries, but in my university course on French literature of the nineteenth century. I have been in awe of the green fairy ever since, and Absinthe: History in a Bottle by Barnaby Conrad III presents a history of the drink from the nineteenth century to the present day. History in a Bottle is a large-size book luxuriously illustrated with drawings, photographs and most especially, colour paintings which depict absinthe, such as L’Absinthe by Degas from 1876:

The cover of the book shows The Absinthe Drinkers by Raffaëlli. Maignan, Orpen, Rutherston, Toulouse-Lautrec. Van Gogh, Monticelli, Gauguin and Picasso all painted works featuring absinthe, some using the drink as subject matter several times. All of these artists and their representative paintings are featured. Poets and writers who regularly partook of the fée verte include Verlaine, Rimbaud, Wilde, Baudelaire, Hemingway and (Harry) Crosby. The posters used to advertise absinthe, as well as the bottle labels themselves were works of art and they are generously reproduced throughout the text. As a result, the 160 pages had at least one illustration on every double-page spread, which provided an entertaining read. The colours of these artworks and the high quality heavy paper made History in a Bottle a genuinely beautiful book to behold. I would like to purchase it for my own collection.

Absinthe was consumed by artistes and those who haunted the nightlife of French society during la Belle Epoque, however it was not limited to them, although it was an expensive drink. Absinthe was of an astonishingly high alcoholic content–usually 120 proof, at least–and rendered habitual drinkers into numb urchins. That absinthe, while invented by the Swiss, has always been associated with the French only heightens its romance. Who wouldn’t be struck by the beauty of a light green anise-scented fluid in a crystal glass, topped by a special silver absinthe spoon adorned by a cube of sugar, served next to a smartly dressed belle dame of haute société? The presentation alone would draw me in–and I’m not even a drinker. Imagine me getting hammered on absinthe–me, who always splits a beer when Mark and I go out!

Unfortunately absinthe suffered as the scapegoat for the ever increasing state of French inebriation. Campaigns by temperance leagues and multiple attempts through legislation eventually led to the ban of the drink in France in 1915. The Great War meant that France wanted her men healthy and sober, and something had to take the blame for all the staggering souls. Absinthe, as Conrad analyzes in great detail, took the heat when there were myriad other alcoholic beverages, and those who drank them, which did more damage.

Conrad wrote about the state of absinthe after the ban, and as US Prohibition later proved, one cannot legislate away the desire for alcohol. Absinthe was distilled in secret, yet as long as Spain kept it legal, and as long as France shared a long border with Spain, la fée verte couldn’t be eradicated forever. Yet the Great War, as well as changing alcoholic trends favouring cocktails shifted the preference of the beverage of choice. History in a Bottle ended on a rather boring note, however, as the appendix was devoted to the chemical breakdown of absinthe. Three very large pages of unpronounceable terms and chemical notations, yet the science was important to understanding why absinthe was so much more potent than other alcohols.