Act of War: Lyndon Johnson, North Korea, and the Capture of the Spy Ship Pueblo 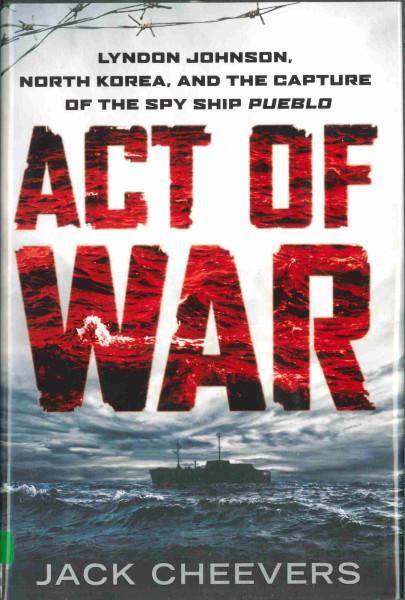 In January 1968 the American spy ship USS Pueblo was captured while outside North Korean territorial waters and its crew was held prisoner for an entire year. The illegal abduction of the vessel and its aftermath, known as the “Pueblo Incident”, kept the Lyndon Johnson administration on tenterhooks wondering whether or not the 82 crew members would be murdered or set free. Act of War: Lyndon Johnson, North Korea, and the Capture of the Spy Ship Pueblo by Jack Cheevers is a 2013 publication about this event that stunned a nation and instilled fear of a second war in Asia.

I had read about the capture of the Pueblo in many of the books I have on the DPRK, yet not an entire book on the subject. Act of War provided a background of the personal life of the captain, Lloyd Bucher. Cheevers interviewed Bucher although the captain died in 2004. While Bucher was in command, the Pueblo found itself in a most vulnerable position. Although it was outside the twelve-mile DPRK maritime boundary, it was nonetheless approached by North Korean ships, fired upon and subsequently boarded. The Pueblo could do nothing as no other American ships or planes were in the area and the two machine guns on board were no match for the hostile fire that befell them. Bucher had to make up his mind, and fast. Save face by showing at least an attempt to fight back with his relative pea shooters, which no doubt would have led to more casualties and further deaths of his men? One of his firemen, Duane Hodges, had already been killed and several other men were injured. The Pueblo was surrounded and the North Koreans were firing. SOS was signalled and help was on the way, or was it?

The Pueblo was a poorly outfitted spy ship, and had no facilities to dispose or destroy the mountains of confidential paperwork on board. Sailors could not possibly have shredded or burned all the documents in the time when they realized enemy ships were approaching to the time that the Koreans boarded. Some sailors were left with no other option but to rip up piles of paper into bits. Faced with enemy fire, an injured crew and no help coming, Bucher was placed in a situation no captain ever wants to face: that of giving up the ship with loads of top secret cargo. That he gave up the ship without a fight would haunt him in the court of inquiry that followed.

From January to December, Bucher and his crew of 81 were beaten and tortured, but they would not confess to the crime of trespassing into North Korean territorial waters. Starved and deprived of sleep, the crew was also forced to sit through indoctrination sessions where they listened to lectures about the evils of American capitalism and the glories of Kim Il Sung. Their captors even offered to give them their freedom if they became spies for the North. In spite of the endless cycle of torture, which Cheever described in such vivid detail I often winced and reached for various personal body parts as I read, the men would not sign forced confessions or apologies. While some of the crew had written their own memoirs about their year of imprisonment, the level of detail in the methods of torture they experienced may not have been revealed until now.

The North Koreans wanted an apology from the Americans for spying on their country and for straying into their national waters, yet the American authorities always denied that the Pueblo had even come close to the twelve-mile limit. The United States was exceptionally vulnerable in dealing with the DPRK as its military resources were stretched in Vietnam and did not want to face the possibility of starting a war with the North. So while the DPRK used torture against the Pueblo crew, the US used diplomacy. The sickeningly emaciated and injured crew was paraded in front of the media, forced to sing the praises of their captors and humane treatment, while the Americans could only sit back and watch. The Pueblo Incident had left the United States shamefully embarrassed:

“A small communist country with a bathtub navy had picked off the Pueblo. How had this national mortification come to pass? Why hadn’t the ship been rescued? Did the potential gains of seaborne surveillance justify the risks?”

The North wanted an apology to shame the United States internationally, yet understandably the US did not want to apologize for a crime it did not commit. The North would not budge, however, and for all we know it would have happily kept the crew as prisoners, subjecting them to torture, beatings and starvation, until they got whatever they demanded. As 1968 wore on, President Johnson was facing increasing public pressure to do something. His administration also had to calm the trigger-happy finger of South Korean president Park Chung Hee, who threatened to invade the North even if the United States didn’t. Thus in order to prevent war and also to save the lives of their 82 citizens, the US decided to sign a letter of apology, provided they could “pre-repudiate” it first. The idea of repudiating the apology before signing it was of no consequence to the North Koreans. They obviously wanted a letter to show to their own people and also to the world at large, who obviously would have already seen the American repudiation first. Propaganda purposes at home outweighed any international opinion as the letter of apology was printed in newspapers and blown-up to gigantic proportions on the Pueblo itself.

The crew was released just two days before Christmas. A court of inquiry followed, where Bucher felt as though he would have to take the fall for the whole affair. Bucher’s defence always put his crew first: should he have saved American face by firing the two machine guns in vain, likely resulting in the deaths of more of his crew? Or was it better to give up the ship with only a minimal fight, in order to save his men’s lives, and hope for a rescue? Public opinion, however, was always in his favour, as Bucher and his crew were treated as heroes by the American public wherever they went:

“Americans embraced Bucher for the reason that he hadn’t thrown away lives for the sake of some quixotic notion of military honor or tradition. The more thoughtful ones understood, too, that regardless of the court’s outcome, Bucher for the rest of his days was condemned to mentally replay the events of that ferocious afternoon in the Sea of Japan, doubting and second-guessing himself, wondering whether he’d been tough enough, searching his innermost self for some mortifying streak of yellow.”

The court of inquiry, however, was looking to lay blame. How very un-American it was to hand over a spy ship full of top-secret documents without a fight. Yet:

“That issue–whether or not Bucher had the ability to fight back at the time he surrendered–was the central legal conundrum facing the court of inquiry. On its surface, ‘the power to resist’ seemed like a convenient rhetorical yardstick for measuring whether a skipper had lived up to the don’t-give-up-the-ship ethos. As far as many naval officers were concerned, if Bucher could have fought back but didn’t, he was a coward, a disgrace to the service. But could the power to resist be quantified? If so, how? By number of fighting men? By number and type of weapons? By degree of courage and determination?”

Cheevers exposed the military negligence to provide proper surveillance for one of its own spy ships. Nor did the military outfit the Pueblo with proper disposal equipment, especially for the vast quantity of confidential information it was carrying. Yet Bucher, while officially let off the hook, never felt truly vindicated and chose to retire early, as much from the repercussions of post-traumatic stress as from the sneers and taunts of servicemen who felt he was a coward.

Act of War came with a centre spread of many photos. Among them was a shot taken in 2009 of the “genocide museum” in Sinchon. The photographer credit was none other than my roommate during my 2011 trip to the DPRK, Ray Cunningham. I was surprised and also disappointed that Cheevers didn’t include a photo of the fireman Duane Hodges, the only sailor who was killed during the capture.

During my visit to the Democratic People’s Republic of Korea in 2011 I visited the USS Pueblo, and took the following photos of the ship, anchored in the Taedong River: 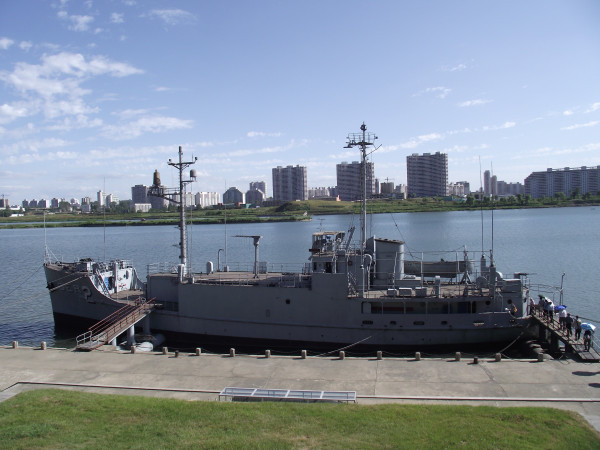 Port side of the USS Pueblo, taken just before boarding 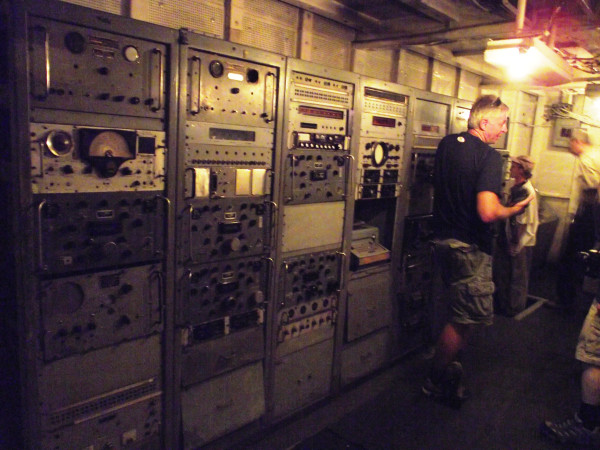 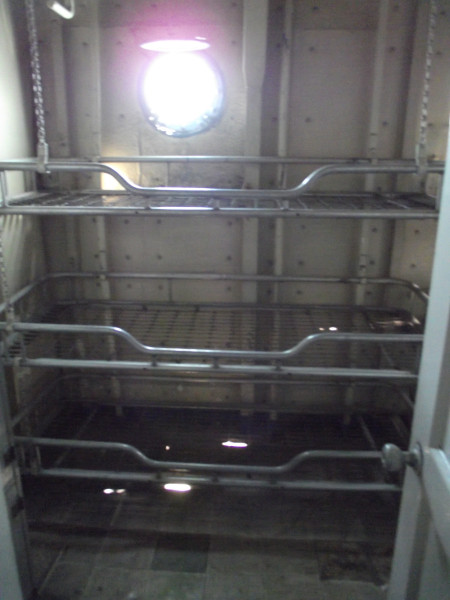 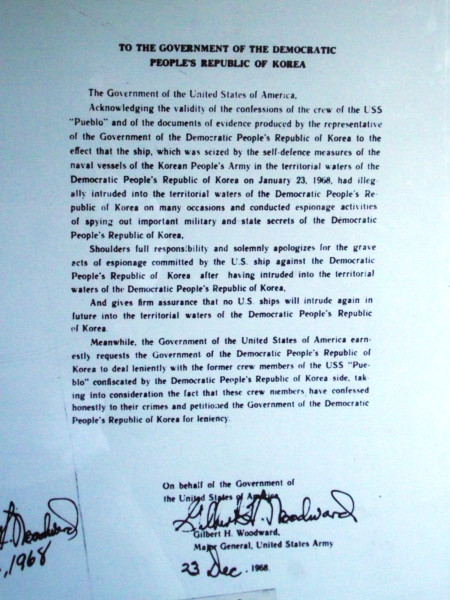 The “pre-repudiated” American apology, blown up to a size to fill a wall 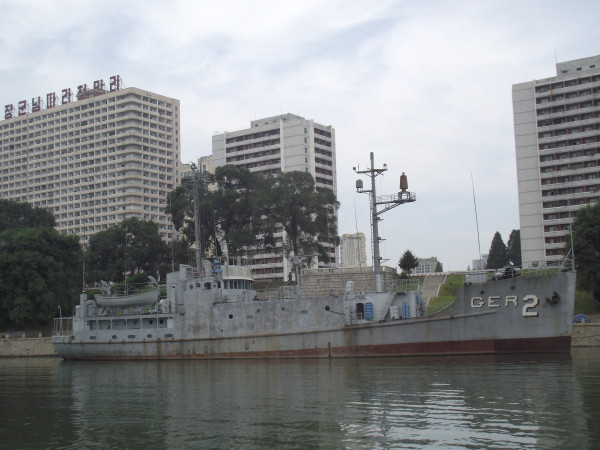 Starboard side, taken from a lunchtime cruise of the Taedong River