ADHD Does Not Exist. The Truth About Attention Deficit and Hyperactivity Disorder 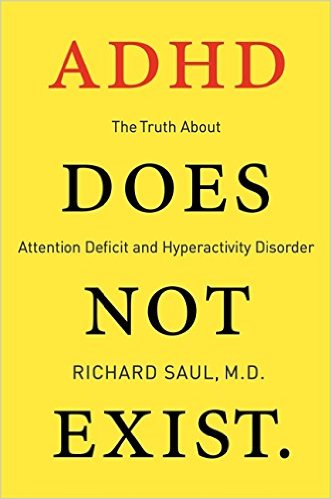 I like debunking ADHD. The title ADHD Does Not Exist. The Truth About Attention Deficit and Hyperactivity Disorder by Richard Saul, M.D. certainly grabbed my attention. Forget about the bright yellow cover; look at the full stop before the subtitle. That’s a way to make your point. And Saul definitely does, better so than another book on the topic, The ADD Myth: How to Cultivate the Unique Gifts of Intense Personalities by Martha Burge which I read four years ago. Saul is a doctor and neurologist who has decades of experience in the field of clinical diagnosis. What he has seen in his practice refutes the bandwagon pop psych misdiagnosis of the nonexistent ADHD:

“Working with referred patients over the next decade confirmed what I’d suspected for years: The symptoms of ADHD are better explained by other conditions. In other words, ADHD, as we currently define it, does not exist. The majority of patients who came to my office with a primary diagnosis of ADHD qualified for other diagnoses that explained their symptoms. Many other patients had no condition at all. For many of those patients who did qualify for other diagnoses, their previous physicians had diagnosed the other conditions as comorbid (occurring simultaneously) with ADHD. Once I treated what I saw as the primary diagnosis (the non-ADHD diagnosis), the attention-deficit and hyperactivity symptoms usually disappeared, leading me to believe that ‘ADHD’ was a product of other primary conditions, and not a condition on its own.”

Saul wrote his book as an analysis of over twenty primary conditions that exhibit attention-deficit/hyperactivity symptoms. By getting to the bottom of a diagnosis, he can target the underlying condition and in so doing, “cure” the ADHD as well. Could one’s ADHD be a symptom of poor vision? Or of not getting enough sleep? Obsessive-compulsive disorders, Tourette syndrome, Fetal alcohol syndrome or Asperger syndrome? Substance abuse or hearing problems? Even gifted children exhibit signs of ADHD if they are not stimulated enough in class because they are too advanced for the material. Saul described in detail how all of these primary conditions have attention-deficit/hyperactivity as a confirmed symptom.

When meeting with patients, Saul described how he conducts an examination. Instead of meeting with them for a rushed (yet altogether typical) seven-minute consultation–often with a prescription for Ritalin already pre-written–he does a full check, which may include: vision and hearing tests, blood tests, urinalysis, allergy tests, genetic tests, and even EKG’s, EEG’s and CT scans. The majority of these tests will not provide their results immediately. So many patients diagnose themselves with ADHD before they even set foot inside a doctor’s office that many physicians find it difficult to contradict a patient intent on leaving with a specific prescription. Saul will have none of that. Prescription drugs are not placebos, and a drug prescribed unnecessarily will have deleterious effects:

“Stimulants are a Band-Aid solution to an underlying problem, but they are much worse than a bandage because they have the potential to create new problems for those who use them.”

“The worst part about the use of stimulants for those diagnosed with ‘ADHD’ is that had they been diagnosed correctly in the first place, they wouldn’t have wound up with the prescription and all the potentially negative consequences. Many of the case examples we will consider in later chapters include children and adults who’ve lost appetite, sleep, and general well-being to stimulants they didn’t need. Practitioners and the general public alike must be much more cautious with stimulants and the potential for addiction when using these drugs, regardless of an ADHD diagnosis.”

Saul, like Allen Frances, M.D., ripped into the authors of the latest Diagnostic and Statistical Manual of Mental Disorders V (commonly known as the DSM-V). He pulled no punches among his peers:

“The motivations of the DSM-V authors, like with ADHD, are also questionable. Some have argued that the medical practitioners behind the DSM-IV depression criteria had financial ties to pharmaceutical companies, which motivated them to ensure a high rate of diagnosis for the disorder (ensuring, in turn, a larger number of customers for antidepressants).”

The solution to this epidemic of false ADHD diagnoses, thus, is to spend enough time with patients to provide a thorough and accurate diagnosis. ADHD sweeps all other conditions under the rug, but since an ADHD diagnosis provides a prescription as well, then, bonus, it has to be right. The patient believes that if he leaves with a prescription–particularly one that he in fact asked for–then all his woes will be healed. Far too many doctors fail to get down to the bottom of an accurate diagnosis in their rush to see as many patients as possible:

“As I’ve mentioned in detail in Part I of this book, there is an epidemic of ADHD misdiagnosis, and that’s the result of the motivations and activities of several groups: medical practitioners, pharmaceutical companies, and patients themselves. Ongoing media attention devoted to ADHD has made it easy for people to ‘diagnose’ themselves with the disorder, and for physicians to diagnose ADHD too easily (as Justin’s neighbor did) or prescribe stimulants after asking just a few questions (as Yvette’s doctor did).”

Saul also describes in one chapter how often there is no diagnosis at all. “Not every set of symptoms is a diagnosis.” and, like Allen Frances, we have to step back and look at what is normal in our lives and stop trying to medicalize what we are struggling with. Often these struggles are temporary. A minor roadblock or bump on the path of life does not need a prescription, just some confidence and perseverance. The hyper-stressed world of being constantly plugged in either on-line or at work is diverting as well as sapping our attention spans. No wonder children can no longer pay attention when they’re checking their phones every twenty seconds for messages. This impatience is the new normal.

ADHD Does Not Exist. was a rapid read. Many times I looked down at the page I was on, surprising myself that I had advanced so far in so little time. Since Saul wrote about over twenty different primary conditions, with the intent perhaps that those who were not affected by any of the other conditions wouldn’t bother reading any other chapter except the one that affected them, there was a lot of repetition, especially in the concluding remarks. His mantra, always in italics, drove home his point: As with any disorder mistaken for ADHD, treatment delayed is treatment denied. If you believe you or someone you know has ADHD, spend the time and effort to get a thorough diagnosis.