Adventures in a Mud Hut: An Innocent Anthropologist Abroad 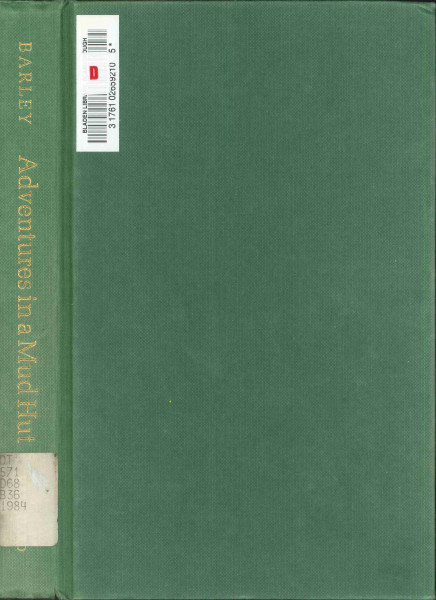 I learned about Adventures in a Mud Hut: An Innocent Anthropologist Abroad by Nigel Barley from the bibliography of Fruits of Apartheid: Experiencing ‘Independence’ in a Transkeian Village by Julia Segar which I read in February. I thank my library system’s interloans department for acquiring this book from Scarborough College. Barley related his experiences studying and working among the Dowayo people in Poli, Cameroon. Both Barley and Segar aimed to present their anthropological work in an accessible format, however Barley used humour to convey this (while Segar avoided excessive academic jargon). Humour was the approach from the start, as Barley found himself hapless in even getting to the country by trying to navigate the mayhem that is Cameroonian bureaucracy. Even though this book was published in 1983, Barley still emanated a sense of British colonial superiority over the native population. I got the impression that his offensive observations were mainly his frustrations in coping with the Cameroonian way of doing things (or lack of doing things) versus any racist opinions he might have felt. After all it may be difficult to be objective when all your efforts to produce the required immigration and employment paperwork are then thrown into the garbage before your very eyes. Yet as soon as page 16, his accented British English entitlement is showing:

“Eventually, a huge African woman entered and I was the subject of a long conversation in a language unknown to me. I suspect now that it was English. If anyone approaches you in old British territory speaking a totally unintelligible tongue of which even the basic sounds are quite unfamiliar, it is probably English.”

Once he got to the Cameroonian capital, Yaoundé, it was still a long way to his field village, Poli, where he would be stationed. In his attempts to learn about the Dowayos from the people who lived there, he received similar disparaging impressions. First, from the Catholic mission:

“‘Who lives over there?’ I enquired politely at the Catholic mission. Yes, it seemed the Dowayos did exist. Fortunately, the Catholics had had very little to do with them, they were terrible people. At the school the Fathers ran they were always the very worst pupils. Why was I interested in working with Dowayos? The reason for their mode of life was simple: they were ignorant.”

and then from a group of about eight people he picked up in his car on his last leg to Poli from the village of Gouna:

“‘You are all Dowayos?’ I inquired. There was a stunned silence. I repeated the question. As one, they roared with outrage. Haughtily, they disclaimed any kinship with that debased race of sons of dogs. They, it seemed, were Dupa. It was implied that no one but an idiot could confuse the two. The Dowayos lived over the other side of the mountain. Our conversation was over.”

Barley integrated himself into the village by learning the language and by being friendly. It was easier for the Dowayos to confide in him if he was generous and offered them rides into town. He learned though that bribery was also an effective way to get the people to talk. Yet in spite of these efforts his main ticket into the lives of the Dowayos was through his local assistant, Matthieu. (Unlike Segar’s assistant, Mrs. Mokoena, Barley’s assistant had a first name.) Barley wrote about the anthropological record and its lack of mentioning any help provided by local assistants:

“The anthropologist’s assistant is a figure who seems suspiciously absent from the ethnographic accounts. The conventional myth seeks to depict the battle-scarred anthropologist as a lone figure wandering into a village, settling in and ‘picking up the language’ in a couple of months; at the most, we may find references to translators being dispensed with after a few weeks. Never mind that this is contrary to all known linguistic experience. In Europe, a man may have studied French at school for six years with the help of language-learning devices, visits to France and exposure to the literature and yet find himself hardly able to stammer out a few words of French in an emergency. Once in the field, he transforms himself into a linguistic wonder-worker. He becomes fluent in a language much more difficult for a Westerner than French, without qualified teachers, without bilingual texts, and often without grammars and dictionaries. At least, this is the impression he manages to convey. Of course much may be done in pijin or even in English, but as often as not this isn’t mentioned either.”

Life of an anthropologist in the field rarely involved doing the hard academic work on site. For Barley, the majority of his time was occupied just with adapting to village life and worrying about finding food and the other necessities for survival. He dealt with both the dry season and the rainy season and the need to somehow find a way to keep his notes and journals dry. At night his hut was infested with mice, which he later learned to catch with traps and then give to the local children to eat. Yet one creature even smaller than that drove him crazy:

“Ten million cicadas scattered around the hills of Dowayoland produce that pleasant hum that is the hallmark of evening in tropic climes. A single cicada trapped in your hut is a recipe for insanity. They have a curious ability to dissimulate themselves into small crevices. It is strangely difficult to get a directional fix on their sound. In light they are completely silent. In darkness, they produce the most piercingly strident rasping screech.”

Barley revealed that many anthropologists who work in the field spend their time gathering facts and statistics, not knowing specifically why they need this certain information. He would eventually figure it all out when he got back to England. In time he was entrusted to take part in attending rituals and ceremonies, as long as he didn’t tell any of the local women what he saw. For the Dowayos, many such traditions are sex segregated. He was able to relate certain rites of passage with the harvest and was able to piece together Dowayo testimonials to ensure that his conclusions were accurate.

In spite of two bouts of malaria and the loss of his two front teeth in a car accident, Barley was hooked on the place and returned to Dowayoland six months after returning home to England. Shortly after I started reading the book, and until I finished it, I felt that its level of humour bore it a greater resemblance to Where the Hell is Tuvalu? How I Became the Law Man of the World’s Fourth Smallest Country by Philip Ells than its level of academic accessibility to Segar.