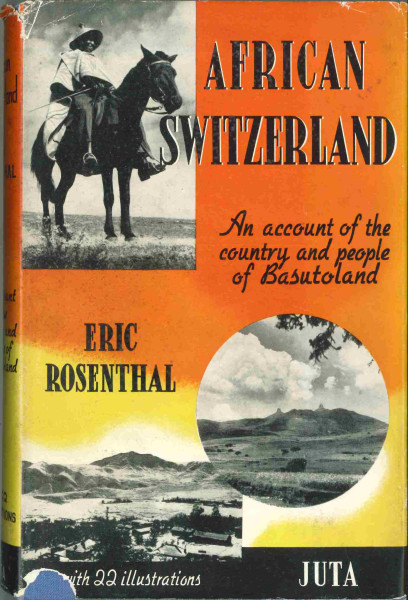 African Switzerland: Basutoland of To-Day by Eric Rosenthal is really, in spite of the subtitle, a history of the country published in 1948, thus eighteen years before Basutoland gained its independence and adopted the name Lesotho. I bought this book while in Cape Town following my trip to Tristan da Cunha. A cataloguing note, first of all: the subtitle on the dust jacket does not match the subtitle on the title page, which is the page that counts. When a book lacks a CIP page, the cataloguing information is culled from the title page.

One cannot read African Switzerland without the taint of racist attitudes and terminology. Rosenthal, a South African writer born in 1905 who later wrote Shelter from the Spray, was only writing of his time and using words that were considered normal, and not offensive, among some South African Caucasians. I cannot help but wince whenever he made reference to:

“Even the little piccanins wore a few rags to keep away the chill of the nights.”

Basuto children were often referred to as “piccanins”, and there is even an inherent racism in referring to the children’s apparel as “a few rags”. I was prepared for this tone of the Caucasian superior lording it over the primitive Basuto, yet I ground the enamel off my teeth when I read lines such as:

“The number of girls whose features are attractive by European standards is small, but occasionally one encounters faces of real refinement, probably due to an infusion of outside blood.”

Some passages were scathingly racist, as seen below when the author tried to explain:

“Later, I learnt why Basuto names are often long. Many of them are really sentences or phrases. Thus Goitsemodimo, which is a girl’s name, means ‘God alone knows’ (who the father is?).”

The parenthetic insert is the author’s! Unbelievable to read that in print in 2015. As well as the following, when discussing the sculptor Samuel Makoanyane, who had died in 1944:

“He stands unique in the field of Bantu achievement, for his style has nothing of that negroid grotesqueness which we are accustomed to associate with whatever is modelled by the black man.”

So I rolled my eyes whenever Rosenthal made disparaging remarks such as this. I did not buy African Switzerland as a sole authority on Lesotho history, as I was well aware of its historical context. I also bought a more contemporary history of Lesotho while in Cape Town, yet I chose to read African Switzerland first. I will certainly compare the two books once I read A Short History of Lesotho: From the Late Stone Age Until the 1993 Elections.

Another comparison worth discussing is of course that of Basutoland to Switzerland. At first it might seem insulting to the Basuto to feel the need for a comparison to a European landlocked nation in order to be considered recognizable or even relevant. I also feel however that in 1948 this book may have been one of the few titles ever to be written about Basutoland, and a comparison to Switzerland would have caught more readers’ eyes than a title without it. I was puzzled, and had a profound shaking-my-head-in-disbelief moment when I read the following passage about the two countries:

“Both Basutos and Swiss are warrior nations, who have fought like tigers to maintain their nationhood–and fought successfully too. Both inhabit countries so poor that the mass of the people must seek their bread on foreign soil.”

Switzerland–Switzerland–so poor? No, definitely not, and not in 1948. Where did Rosenthal get that information?

The modern history of Basutoland is discussed, from the early nineteenth century on. What kept the country independent was in large part due to its location: Lesotho is known among geographic and world records nerds as being the nation having the highest lowest point. Its lowest point is 1400 m; thus as a mountainous nation it was relatively easy to keep invaders at bay. Rosenthal told many stories of warriors hiding behind peaks, throwing assegais and other weapons down onto the invading tribes or colonialists. Tanks and even cars couldn’t climb the terrain. The mountainous landscape was ideally suited for travel on horseback. What I did not know is that the Basuto people only adopted horses as a form of personal transport in the early 1800’s. I also learned about the valuable service the Basuto troops provided in World War II.

In talking about the Basuto capital, Maseru, Rosenthal wrote:

“With a white population of 600 and a black community of under 2,000, it shows few, if any, signs of growth and even fewer civic ambitions. To reach its present size this minute metropolis has required eighty years, and it is doubtful whether in another eighty it will be substantially larger.”

Ahem. It has taken only sixty years to go from 2600 to a population of over 220000! I’d think twice before making another without-a-doubt prediction again.

African Switzerland is now of use only as a historical curiosity, written before Lesotho achieved independence when it was still under threat of being subsumed–legally–into the Union of South Africa. The book was illustrated throughout by charming pencil sketches by the author himself, and I enjoyed gazing at them all for extended periods before continuing with the story.