All You Needed Was Love: The Beatles After the Beatles I bought All You Needed Was Love: The Beatles After the Beatles by John Blake shortly after it was published in 1981. That was a time when I bought every Beatles book out there, regardless of merit. Not that I never thumbed through this book before or after I bought it; I just never read it cover-to-cover, until now. The back cover was slobbered with sensationalistic hyperbole, such as “Here is the first book to detail the gothic horrors that befell the Beatles after the breakup of the group in 1970.” Sheesh–what would I discover inside? The price was $10.95 and it was a sum I should have kept in my pockets, as I learned nothing about the Beatles’ solo careers that I didn’t already know (nor would I have not known then), other than how to misspell certain names (and you can be sure that I have documented every one). A spelling error in a name of a well-known person sticks out like a fistful of sore thumbs. How could Blake have allowed Rhada (instead of Radha, as in the Radha Krishna Temple) to go misspelled twice; Klaus Voormann’s surname misspelled as Voorman every single time; Jimmy McCulloch’s surname misspelled as McCullough every single time; Marianne Faithful instead of Faithfull; Procul Harum instead of Procol Harum; Eric Burden instead of Burdon; Denny Siewell on one page and then correctly spelled as Seiwell on the next; gallery owner John Duncan (incorrect) on one page and John Dunbar (correct) on the next; and there were more. Perhaps the most egregious were the repeated references to Canadian President Pierre Trudeau. I just had to roll my eyes heavenward and take a deep breath each time I encountered it.

And then there were the factual errors. I had to laugh at Blake’s reference to the “girl chorus” in “My Sweet Lord”. All the backing vocals, including the ones on this song, were provided by George himself.

The premise was to tell the story of the Beatles after their breakup in April 1970, but Blake spent a good 83 pages of his 286-page book talking about the group while they were still together. I realize a little backstory is important but I did wonder when he’d get to discussing their solo careers. From Paul McCartney’s first solo venture, his album McCartney, Blake seemed obsessed with exposing how lacklustre he was in live performances, calling him “insipid” on multiple occasions. He rejected all of his work until his brilliant album Band on the Run. At least Blake discussed most of the Beatles’ solo albums, yet oddly he never even mentioned Ringo’s star-studded biggest success, Ringo, by name.

John’s battle with US immigration was covered as well as his separation and reconciliation with Yoko. He called May Pang his “pretty Japanese secretary” which is a shock since she is of Chinese heritage. Chalk that up to just one more careless mistake. Another is writing that Olivia Harrison, George’s second wife, was born in Mexico. She wasn’t; she was born in California.

Since the book ends in 1981 the murder of John Lennon is covered, yet ends on a positive note with the marriage of Ringo Starr to Barbara Bach and a forecast of Julian Lennon’s recording career.

The book did feature some photos that I had never before seen. One of these pictures is certainly the most haunting; so much so that I still get chills whenever I see it. Blake included a horrific shot of George after injuring himself in a car crash. Okay, fine–so there are your “gothic horrors”. I have scanned the picture here.

This is not a book that will be returning to my Beatles bookshelf. 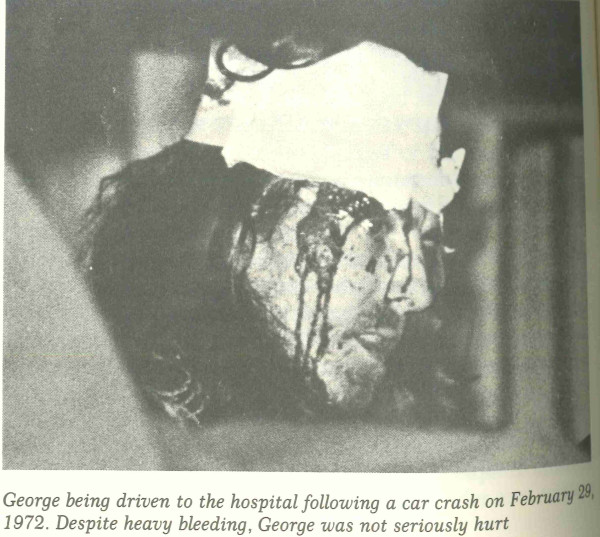