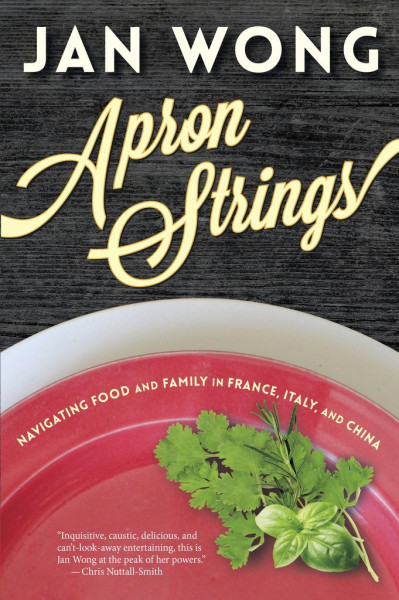 Apron Strings: Navigating Food and Family in France, Italy, and China is the latest work by Jan Wong, an author whose work I thoroughly love. I read everything she writes. Apron Strings chronicled her experiences travelling with her adult son Sam as they roamed the world, looking for places where they could learn local home cooking in the three countries in the title. The Wongs didn’t seek classes they had to enrol in, or registration in a famous culinary institute. Jan and Sam sought live-in arrangements where they would not only share the living spaces but also the kitchens and dining areas with the locals. Through extended networks of friends they managed to find such accommodations in all three places. They also shopped for the food they would cook and as live-in guests–nobody would take a euro or renminbi in payment–they were part of each family, taking part in intimate discussions and doing so with competence in each native language. Although not classed as a cookbook, Wong provided recipes for all the dishes she learned to make or witnessed others make. I even learned a cooking tip on how to prepare fresh mushrooms. I tried it and it worked.

Wong writes exactly as she thinks and this makes her writing seem alive: I feel her wit and often laugh out loud, wrinkle my nose at her dislikes and cringe with each word she put into italics. There were plenty of passages with words in italics; this rendered them thus visually as well as audibly distinct. I could imagine Wong’s voice change in inflection as if she were reading her book aloud to me. I never wanted to end a reading session with any of Wong’s books, and if I had no time restraints I could read her all day. My notes were full of passages that caused me to laugh out loud and read again. Wong’s observances often left her dumbfounded and would make perfect cut-to takes if ever this book was made for television. Read about her encounter with the preeminent French cookbook, Je sais cuisiner by Ginette Mathiot, a giant tome at 773 pages:

“I flipped through the cookbook while Bernadette unwrapped the veal. Among its two thousand recipes were a hundred and twenty-six for sauces alone, everything from sauce à l’abricot to sauce Zingara, and even ‘ketchup à la crème.’ Each of the hundred veal recipes were only a single paragraph, even for blanquette de veau. Julia Child’s nearly four-page recipe for blanquette de veau à l’ancienne made me want to lie down in a darkened room with a damp towel over my forehead. Child’s 684-page tome, Mastering the Art of French Cooking, Volume I, would discourage all but the most enthusiastic novices. In contrast, Mathiot’s was encouraging. Who couldn’t follow one paragraph of instructions? At other homes in France and Italy, I discovered similarly minimalist cookbooks. They presumed a level of technical competency that everyone had learned at their grandmother’s knee. Recipes didn’t explain how to make a roux. They didn’t even provide the correct proportions of flour and fat. They merely said, ‘Make a roux.‘”

I still laugh as I read this! Classic Jan Wong, that is. Same for her reaction whenever she was served French food. First there is surprise. Then, you deal with it:

“In France, no one asks what dressing you want on your salad–it comes with vinaigrette. French chefs don’t care how you’d like your steak cooked–it comes medium rare. When I think back, no one we cooked with in France or Italy or China ever asked whether I disliked anything, whether I was a vegetarian, or whether I was allergic to nuts or gluten or dairy. You ate what was cooked. Those with special needs adapted, including Philomène and Pierre-Marie.”

Apron Strings was a delight of culture-shock moments and really, there is no better way to depict this than just by letting Wong’s words speak for themselves. The following are all highlights from the text that make me laugh every time:

“I sulked and turned to washing stupid organic lettuce. I say ‘stupid’ because it was coated in black dirt, which required eight washes before the water ran clean. After that, I vowed to buy only chemically poisoned greens.”

About the contrast between what constitutes cooking versus baking:

“When you bake, you measure. You had to sit up straight and pay attention. Thus, I have failed almost every time I attempted to bake a pie or a cake. Once, my cookies stuck to Teflon. I couldn’t pry them loose even after I soaked the pan in the sink. The only solution was to throw out the tray, cookies and all.”

The best image in the book was the description for a particular vegetable. Even if you had never seen such a cauliflower, you would know exactly what it looked like:

On learning about local cuisine in mainland China, Wong realizes that the freshest of meat is not found in a supermarket:

“Some mothers take their sons to natural history museums. I thought Sam should witness a chicken slaughter.”

Yet some Chinese cooking traditions are negatively stereotyped and Wong has no patience for them:

“‘Chinese Restaurant Syndrome’ had been thoroughly debunked. I now roll my eyes and grow uncooperative when Canadian friends ask me to transmit their no-MSG request to Chinese waiters, who of course speak fluent English. Aside from my friends’ presumption that I alone can communicate with the waiter, I resent the innuendo that only Chinese food uses MSG. In fact it is in everything from Goldfish crackers to seasoned fries to ranch dressing to the hydrolyzed vegetable protein in fast food.”

For more of these zingers and spot-on observances, you’ll have to read Apron Strings.