Arctic Living: The Story of Grimsey 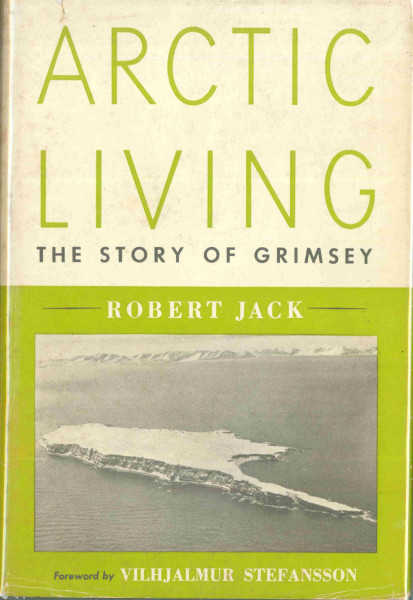 After my trip to Grímsey last year I searched on-line for the first and only book in English written about this tiny Icelandic island. While I was still in Reykjavík I found an excellent copy of Arctic Living: The Story of Grimsey by Robert Jack for sale at an antiquarian bookseller website. I ordered it while still in Iceland. This book, published in 1955, is a memoir of a Scottish Icelandophile, who became ordained as a minister in the Icelandic Lutheran church. Jack served at first in Heydalir, on the east coast of Iceland. He mentioned early on in the book that he learned Icelandic, but it wasn’t until the second-last chapter, entitled “What a Struggle!” (note the exclamation mark) which he devoted entirely to his quest to learn the language. Jack attained fluency by being self-taught:

“But I had to succeed and I would. I was not only a minister of the church but also an official of the Icelandic state, and I had to speak, read and write the best language. It gives me great pride now to be asked by a stranger, ‘What part of Iceland are you from?'”

Jack married an Icelander and certainly enjoyed his time spent in Heydalir, yet his dream however was to go to Grímsey:

“From the first I had considered Heydalir a stepping stone, for I had with me still the vision of Grimsey, that long, low island off the northern coast.”

I can definitely identify with the author in that we both share passionate obsessions with islands and island life. Arctic Living documents his time as the resident minister of the tiny Grímsey church: 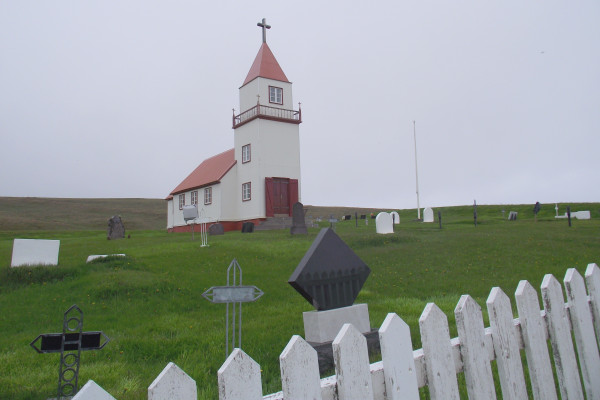 Grímsey is the only inhabited part of Iceland that lies within the Arctic Circle, hence the title. Jack was respected and welcomed within the tiny Grímsey community immediately, and being fluent in Icelandic and having an Icelandic wife certainly helped win over the congregation. In a tiny community such as Grímsey one often has multiple functions, and Jack also served as the general go-to for medical matters since he had the training. Ministers are also called upon to serve as confidants and mediators, which further added to his job description. In spite of his passionate foreknowledge about this tiny isolated place, Jack was not prepared for the overall insular attitude of its residents:

“The islanders dearly love a fight, but it is not the kind one sees in the prize-ring. Their encounter is not with men but with the elements. They are tenacious because bitter winds, frost twenty degrees below zero, snow blizzards and stormy seas make them that, and although their hearts are soft they are hard in body. Having to rely much on their own endeavours, they remain individuals, and often find it difficult to unite for a common purpose. They retain their interest and pleasure in simple things, but their life is varied and always exciting.”

“One of my difficulties on Grimsey has always been to maintain an adequate social life. In summer there is work and in winter there are blizzards, and we prefer often enough to stay by our own firesides, brooding sometimes over imaginary grievances, rather than meet and mingle.”

Jack kept a diary and one of his entries made me titter:

“Was asked to translate the directions on a bottle of shoe dye. Some thought it was food colouring while others considered it stuff to dye shirts. The dye was English, and there was a laugh when I explained its use.”

While Jack quoted verbatim some of his diary entries, Arctic Living, in fact, reads like a personal at-home chat with the author. Although there was dense text and few paragraph divisions on its 181 pages, the story flowed rapidly and I turned each page with excitement, ending up disappointed when I reached the end of a chapter. My time on the island helped me all the more picture Jack and his family among the church grounds, or walking among the sheep or sharing a coffee with a neighbour. I have spent time doing all three of those activities while on Grímsey.

I have walked all over Grímsey so I was familiar with Jack’s descriptions of the steep and sheer cliffs, the fog and rain, and the relentless Arctic terns who seem to lay their eggs anywhere–even in high-traffic areas–and then get particularly vicious towards humans when they unknowingly approach the nests. My trip was in July of last year while Jack lived there year-round, so he experienced the deep freezes as well as the summer droughts, when the natural springs barely issue a trickle. Jack served on Grímsey after World War II and left before 1955, thus before the airstrip was constructed. He wrote of the difficulties in both getting to as well as off the island in times of emergency. I recalled my time on Tristan da Cunha and reading about the desperate calls transmitted by Tristan radio to any nearby ships whenever there is a medical emergency on the island. Life on Grímsey can also be hazardous, as one false step on the waterlogged loose grass on the cliff edges has claimed many a cow, sheep or man. Reading about those fatalities sure put my own foggy cliff walk into another perspective.

Grímsey narrows in the north to a needle-like point (see the cover photo). When I was on the island, I felt the illusion of seeing this peninsula encircle me, even though it is so straight. Jack’s photos show the northern tip of the island strangely curl into view. I liked his simile in describing this island feature:

“There was a rose-pink light over everything, and the black, rocky promontory to the west of Sandvik lay stretched out in the calm like the rusty blade of a Viking warrior whom age has forced from the heat of battle.”

Arctic Living was full of firsts for Jack, and his descriptions of pan ice and the seals (“like logs of black ebony”) that climb onto it was impressive. I appreciated that Jack included photos, especially of the harbour, as it looked rather bare back then. The harbour is still nothing elaborate but sixty years ago there was scarcely a breakwater.

Grímsey lies in the middle of prime fishing grounds for herring, halibut and cod and foreign ships would always be in the vicinity. I could not help but feel that what Jack said about overfishing in the area would be tragically portentous. He issued warnings about the depletion of fish stocks decades before anyone paid attention. The foreign fishing vessels would shelter in the lee whenever the sea got rough. The crews would come ashore and often trade with the islanders for goods that each other needed. Birds also contributed to the island diet and not just by their meat but also their eggs. Jack described the perilous task of collecting eggs, where brave souls were lowered down cliffs by ropes to access the nests. At least the islanders were aware of the birds’ nesting habits and knew that if they took only one egg from a nest that contained two, the pair would mate again to replenish the missing egg. Centuries-old island observations knew how to keep the bird populations thriving by not grabbing all the eggs they could get in one go, unlike the habits of some fishermen who kept dropping net after net into the sea, bringing up millions upon millions of fish till their fishing boats, so overladen, sailed close to the waterline.

Arctic Living was a rapid read, where I revisited the foggy island I so longingly wanted to visit a year ago. It was sad to put it down.