Are Men Obsolete? The Munk Debate on Gender / Hanna Rosin and Maureen Dowd vs. Caitlin Moran and Camille Paglia 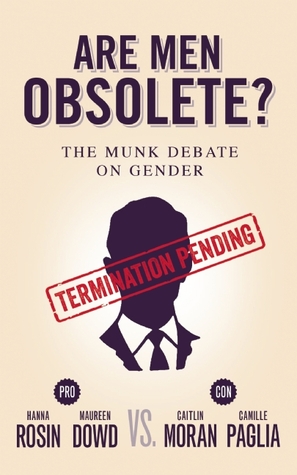 Are Men Obsolete? The Munk Debate on Gender / Hanna Rosin and Maureen Dowd vs. Caitlin Moran and Camille Paglia (moderated by Rudyard Griffiths) is a transcript followed by one-on-one conversations with each debater and the moderator, as well as two post-debate commentaries. The debate in its entirety is quite short, only amounting to 47 pages. I was immediately drawn to one of the debaters on the con side, Camille Paglia, whom I regard as the most important feminist of the past twenty-five years. I own her books, read everything she writes and have seen her lectures and met her. I knew I would get an earful hearing her debate with Caitlin Moran against the motion that men are obsolete.

In this context “obsolete” pertains to men’s historical domination of leading roles in the family, politics and the workforce. Rosin and Dowd argue that more women are graduating from universities and earning salaries equal to men. More women hold positions of political power, and women are just as likely as men to be the higher-earning breadwinner. So men are obsolete in the sense that they no longer dominate these fields while the women they lord over are stuck at home with the kids.

The debaters, especially Moran, employ plenty of pop culture references, and since the debate took place in November 2013 there are plenty of jibes against Rob Ford. In my opinion he alone set men back two hundred years. Paglia is known for making some pretty meaty quotes and in her opening remarks she states:

“A peevish, grudging rancour against men has been one of the most unpalatable and unjust features of second- and third-wave feminism. Men’s faults, failings, and foibles have been seized on and magnified into gruesome bills of indictment. Ideologue professors at our leading universities indoctrinate impressionable undergraduates with perilously fact-free theories alleging that gender is an arbitrary, oppressive fiction with no basis in biology.”

Agreed. I wouldn’t expect anything less profound as as opening remark. In men’s defence, she raises the traditional men’s work of the trades, craftsmanship and industrial arts. It isn’t women who are building roads, stringing up electrical cables and erecting skyscrapers. How can men be obsolete if the infrastructures of modern cities are almost entirely constructed by men?

Paglia elaborates on gender, and the current trend which is to dismiss gender as an artificial construct:

“So I think that women who choose to have children have categorically different lives than men, who can take on fatherhood almost as sort of a social duty, as a social responsibility. But a woman who is pregnant is involved with a fetus in a way that is absolutely primal and instinctual: there are biological forces that take her over. If you raise this issue with feminists today, 99 percent of them squawk and scream and say that this is a conservative, reactionary position. No, this is a realistic position. Feminism is in a state of delusion and losing ground the longer it denies this overwhelming fact of nature. I agree with the Marquis de Sade, Oscar Wilde, Baudelaire, and Gautier–my masters–that it is our obligation as human beings to defy nature if necessary, but one cannot deny nature’s power, nature’s existence. Universities around the world now teach this rot that gender is nothing but a fiction, an arbitrary convention[…]They teach the idea that gender is imposed, and I believe this is absolute madness. How will we differentiate between the genders?”

Moran employed gratuitous foul language in her debating style, as if she felt she could gain points by using four-letter words. Dowd was inexperienced as a debater and said so in her opening remarks:

“I’ve never debated before and I am so screwed.”

Dowd did however follow Paglia so that would send a shiver of insecurity up anyone’s spine, and even more so for an inexperienced debater. All four women agreed on the deplorable state of American education and how boys, from primary school onward, are at a disadvantage. Paglia states:

“I want to liberate education. I think that our primary school system is constructed like a prison and that it teaches absolutely nothing except socially approved trendy thoughts.”

“Yes, and it totally favours girls, and so until you are actually honest about the boy crisis, until you actually allow people to hear the words ‘boys are seriously suffering’–“

The transcript was naturally edited for publication, losing all the oral umm’s and you know’s and I raced right through it. To read all 47 pages of the debate would take merely a half hour. Surely the actual debate was not that brief. I was disappointed when the debate abruptly came to an end, as I knew it would since I had consulted the table of contents and pagination beforehand. A topic like this just gets started after 47 pages, so I couldn’t really get much out of it other than what I have quoted.