Articulate While Black: Barack Obama, Language, and Race in the U.S. 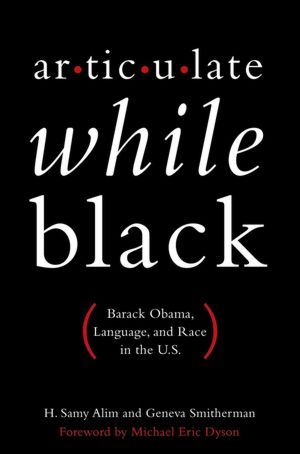 I love to study languages and am keenly interested in regional variants. Most of my books about local idioms are for European languages (such as the variants of German as spoken in Germany and in Switzerland) however recently I have started to collect books pertaining to variants of Canadian English, such as that spoken in Newfoundland and Prince Edward Island. Thus when my library acquired Articulate While Black: Barack Obama, Language, and Race in the U.S. by H. Samy Alim and Geneva Smitherman I was immediately drawn to it. Its theme is black English in the United States and specifically Barack Obama’s use of it as he sought the presidency. Both Alim and Smitherman are professors of language and linguistics and have written extensively about black American language and speech. This book, from 2012, was printed in a small typeface and in an even smaller print size for the voluminous endnotes. I liked the endnotes that were an entire page long because the explanations were so insightful, yet getting to the end of the page wasn’t that easy on the eyes. However the language of the book made it a rapid read, as Alim and Smitherman often employed black American English in the text. Thus Articulate While Black was at times an oral/aural experience. While parts of the book were written in academic standard English, other parts were best understand if reread aloud.

The first part of Articulate While Black focussed on Obama’s command of various idioms of English to convincingly styleshift, that is, to speak to different groups of people (defined by age, race, demographic) while adopting the language and characteristics of that language known to these groups. Alim and Smitherman parsed Obama’s speeches and noted his drawn-out vowels or monophthongization of different vowels, as well as his use and conjugation of the verb to be (or lack of it). The authors state at the beginning of their book:

“In Articulate While Black, we…[view] language as central to racial politics in the United States. This is especially important to us since, despite the constant monitoring and mocking of Black Language, we maintain that Barack Obama’s mastery of Black cultural modes of discourse was crucial to his being elected America’s forty-fourth president. For some obvious and not so obvious reasons, we argue that the ‘brotha with the funny name’ (as some Black folks called him) wouldn’t have gotten elected if he couldn’t kick it in a way that was ‘familiarly Black.'”

“…Barack Obama’s mastery of White mainstream English ways of speaking, or ‘standard’ English, particularly in terms of syntax, combined with his mastery of Black Culture’s modes of discourse, in terms of style, was an absolutely necessary combination for him to be elected America’s first Black president.”

“Our conversations and surveys further revealed that, in Barack Obama, America heard a speaker who was ‘strategic’ and ‘hyperaware’ of his audience. While being cognizant of your audience may come with the territory as far as politics go, what distinguished Obama was his successful stylistic performance. It’s one thing to know that you gotta say ‘the right things’ in terms of content but quite another to be able to say ‘the right things’ in the right way in terms of style. Barack was seen as someone who could speak directly and comfortably with folks across regions, generations, socioeconomic divisions, racial and ethnic groups, and political and religious views.”

The authors claim that we all styleshift, that is, speak in different styles by using different words, inflections and tones depending on whom we’re talking to. Personally, I don’t consider myself much of a styleshifter at all, as I tend to put on a formal front wherever I am. Obama however perfected the art of styleshifting, moving from milieu to milieu, each time adopting the particular styles and words to make him come across as a local homey. You could hear it as he addressed rallies for Hillary Rodham Clinton where he disparaged her opposition. Obama certainly is a master of the style shift:

“…while this journalist wanted Black Americans to abandon Black Language in an effort to ‘talk like Barack,’ the irony is that Barack Obama himself was employing Black Language in an effort to ‘talk like the people.’ In other words, unlike this journalist, he recognized Black ways of speaking as valued symbols of identity and solidarity for members of the Black community. From the basketball courts to the campaign trail to the pews of Trinity United Church of Christ and the barbershops of South Side Chicago, Barack regularly switched back and forth between multiple ways of speaking–without devaluing any of them. It is in this sense that he serves as a linguistic role model not just for Black Americans but for all Americans.”

Another major part of the book dealt with the very word articulate, and how its use is intended to compliment black speakers but is often perceived as an insult:

“Most Black folks can get with adult references to children as ‘articulate.’ What they can’t get with is when Whites refer to Black adults in the same way; it smacks of that same paternalistic attitude that infantilizes Black intelligence, bringing up images of articulate being uttered with an accompanying ‘pat on the head.'”

Alim and Smitherman make the valid linguistic point that black American English is in and of itself a legitimate form of English, and is neither a nonstandard nor an uneducated idiom. Black Language, as the authors name it, has its own grammar and syntax and is governed by rules as any recognized “standard” form of the language. It is not a linguistic free-for-all spoken by illiterates. The authors made an excellent case for the grammatical rules of Black Language. As a linguist I lapped up their analysis of the rules that govern this particular idiom. Thus those who speak Black Language are already speaking articulately, and I can see how a black speaker would take offence at being “complimented” as articulate:

“It’s no secret that many White and other Americans still view Black Language through the ideological lens of Black intellectual and moral inferiority–the overtly racist message boards following every single online news story about Black Language can testify to that. Although little acknowledged in these public discussions, what usually lies behind comments like ‘Black Language is nothing but a lazy, ignorant way of speaking’ are racist beliefs about Black people themselves as ‘lazy’ and ‘ignorant.'”

The authors elaborated on Obama’s own premise that the more one deviates from the dominant white culture in terms of speech, dress or demeanor, the more one is subject to negative assumptions. As long as anyone nonwhite speaks English–or even whites who speak with a drawl or twang–he is suspect of being “different” and his intellect is immediately cast in doubt. The authors challenge the presumption of white linguistic normativity:

“Simply put, why must Black Americans shift toward styles considered White in order to be ‘successful’? These questions show that the way we talk can either grant or deny us access to social, political, and economic opportunities (think jobs, schools, etc.). Barack certainly knew this when he said that Black people who want to be ‘successful’ have to be able to ‘speak several different forms of the same language.'”

The lengthy endnotes have given me many ideas for future interloan reads and the authors explored much more than black English in these notes. My interest was piqued by the Hawaiian language and how it was suppressed by the dominant forces of American colonialism. Articulate While Black will refocus your attention on what it means to be articulate in America, and will open your mind to the wonders of grammar and syntax and how each and every language and idiom is governed by strict rules.