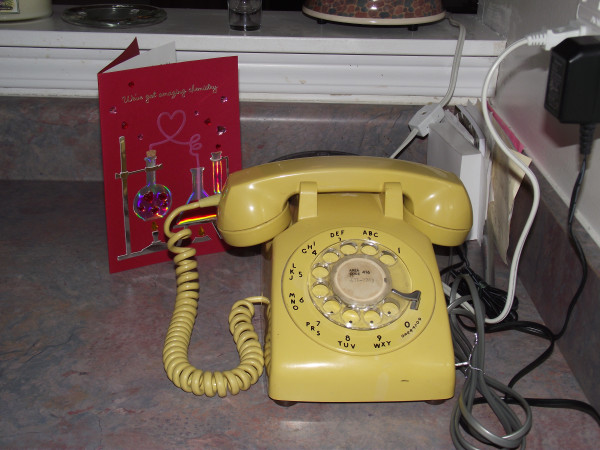 Yesterday I switched back to landline, a mere ten days after my two-year cellular contract ended. I was not happy with cellular service, because I would regularly miss calls. On far too many occasions I would be sitting at home–with a charged phone–expecting a call, often expecting the call at a certain time. The phone never rang. Sometimes a message would be left but the phone wouldn’t chime to alert me about it until over an hour later. My cell provider couldn’t give me any reasons why this was happening, and everything that they suggested I do was of no help. I always made sure that the phone was fully charged, and I also powered it off and on, as they recommended. Over a year into my two-year contract I informed my cell provider that I was unhappy with the service and wanted to go back to landline. To do so would have incurred a hefty penalty, so I decided to stick it out until the contract was over.

I so rarely took my cellphone out of the house that I will not miss it by going back to landline. Whenever I took the phone with me I prayed that it wouldn’t ring, and while I was on the bus I always turned the ringer off. For the life of me I cannot shake the neurosis of having a telephone conversation in public, as I believe all such conversations should be conducted in private. Then why get a cellphone in the first place? Because it was cheaper than my landline service. A lot can change in two years, and now that I am returning to my old landline service provider, I am being treated to a bonus “welcome back” rate that is even less than what I paid on my cellular bill.

Cellular stats from the technological nobody:

Number of text messages I sent in the past two years: none

Number of text messages I received: about ten. Mostly spam from the phone company, however I elected to receive an SMS as a novelty form of confirming a South African hotel reservation.

Number of photos I took with my cellphone: none

Number of people on my contact list: none. I “dialled” the number every time. You don’t forget numbers that way.

I have reinstalled my touch-tone phone in my computer room, and my dial phones in the kitchen and bedroom. Welcome me back to the fifties!