Bananarama in its original lineup of Siobhan Fahey, Sara Dallin and Keren Woodward have reunited and are on tour for the first time ever. Yes–ever. The group never toured while Siobhan was part of the lineup and they made their one and only Canadian stop at the Danforth Music Hall on Friday. I had purchased a VIP2 ticket, which entitled me to an early entry to the general admission show. I gladly paid extra for this privilege. I did not want to have to arrive at the venue hours before showtime in order to ensure a spot at the front of the line in an attempt to get a front-row spot at the stage. General admission means no seating so a rush to the front once the doors open.

I worked only till 1 p.m., went home and had lunch then left. In spite of the guaranteed VIP early entry, I still wanted to get to the Music Hall early so as to be at or near the front of the line. No use paying for the privilege of getting in early if you’re going to end up standing in the second row. I got the bus just past 3:00 and got down there by 4:30. It was raining a bit and there were only three people ahead of me, two of whom were there for the exclusive Bananarama meet-and-greet. Thirty-two people paid $300 for a chance to get in even earlier, meet the band, get photos taken then into the concert first. They were VIP1’s while I was a VIP2.

Over the past week I had received three E-mails from the concert promoter informing me what to do come concert night. I was impressed with this high level of thoughtful communication and wrote to tell them so. Once I was allowed in I would receive a VIP badge and also get a set of three lithographs, one of each showing Keren, Sara and Siobhan. I talked to people in line, most of whom were my age or a bit older. We were comparing concert stories but unlike many of the people in line, I was not much of a concertgoer anymore. My concert heyday was thirty years ago. The earlybirds who lined up after me all shared the same story: we have waited some 36 years to see Bananarama in concert and didn’t want to miss out on a front-row spot. The company we shared was a welcome way to pass a couple hours in the light drizzle.

Around 6:00 I saw an orange jeep with the Bananarama lettering (as seen on my VIP badge) drive east along Danforth. Was Bananarama inside? Were they arriving at the venue for the meet-and-greet? The jeep honked at us.

Once my group of VIP2’s was allowed inside I got my badge and tube of lithographs. I didn’t bother to look at the merchandise for sale or even to check my coat. My priority was to secure a spot at the front of the stage. I entered the concert space and there was still room on the left and right at the front. I chose to stand on the right, since that is where my favourite member, Siobhan, always stands. Their positioning on stage has not changed in 36 years: it’s always Keren on the left, Sara in the middle and Siobhan on the right. I was not hesitant to start talking immediately to the guy standing to my left, a Montrealer named Michel Auger. We chitchat from the time I arrived till showtime, which began just a few minutes after 9:00.

Much to my surprise there was no mad rush to the front of the stage. I suppose members of Bananarama’s main fan base (quinquagenarians like me) would rather check out the merchandise tables, check their coats and visit the bar (or toilets) first. This was the same as when I saw Culture Club with Shelley Ubeika. We were nowhere near the front of the line–and also waiting outside in the rain–yet still managed to get places at the front. I suppose teens still rush the stage, not fifty-year-old fans.

Rough Justice (This was introduced as Bananarama’s “protest song”. Sara wondered if it was known in Canada as it was not released as a single in North America. She then wondered if anyone would know the words to the following song.)

Aie a Mwana (Bananarama’s first single, which was sung in Swahili.)

A Trick of the Night (The song was introduced as having been reinstated to their concert repertoire after it had been cut out of their later UK shows.)

Boy Trouble (This was sung immediately after “Shy Boy” but not abbreviated as if in a medley. The singers were proud of this song because it was written by all of them.)

Stay (This was Shakespears Sister’s biggest hit. Keren and Sara were alone on stage singing the first part of the song, which on the original was sung by Marcella Detroit. Siobhan entered midway to sing her part. After the song she said it was very emotional for her to be able to perform it.)

Preacher Man (My second favourite Bananarama song, and the only one on the set list which was recorded after Siobhan had left the group. Jacquie O’Sullivan appears on the original track and video. Note that Siobhan recorded “Nathan Jones” but had already left the group when the song was released as a single. It was rerecorded with Jacquie’s voice and thus it is Jacquie who appears in the video.)

I Heard a Rumour (This song and the ones to come were introduced by Siobhan loathingly as from their “Waterman Aitken Stock” days. It was this musical direction that culminated in Siobhan’s decision to leave Bananarama.)

I Can’t Help It

I Want You Back

Love in the First Degree

The singers looked fabulous and glamorous and all of them were dressed in black pants and tops. There are concert clips already on YouTube. Near the end of the show Siobhan removed her beret and I think it was Keren who teased her saying that she must still feel secure even without wearing it. At two times Siobhan made eye contact and gave me the thumbs-up. I know this was because she had been looking at me singing along to all their songs. I knew everything they performed!

While the singers still have the looks and the choreographed moves, I’m not so sure about their voices. It was obvious from the start that they were singing to backing tracks and for most of the songs I’d say they weren’t even singing at all–or rather they were but into microphones that weren’t turned on. This was disappointing but not a surprise. I have seen clips of their UK concerts on-line and they appeared to be lip-synching. They did at times sing live but it was easy to tell the difference. Their live voices were fine. Did they feel they couldn’t pull off an entire show? From my position in the front row, I could tell by looking at them that they weren’t singing. Would others in the audience, including those in the balcony, be able to tell?

I kept my own Top 10 Singles Charts from 1983-2001, and Bananarama as well as singer Siobhan Fahey’s later group Shakespears Sister made the following appearances:

by Bananarama (song title / peak position followed by weeks at #1):

Shakespears Sister had one:

Hormonally Yours which peaked at #6 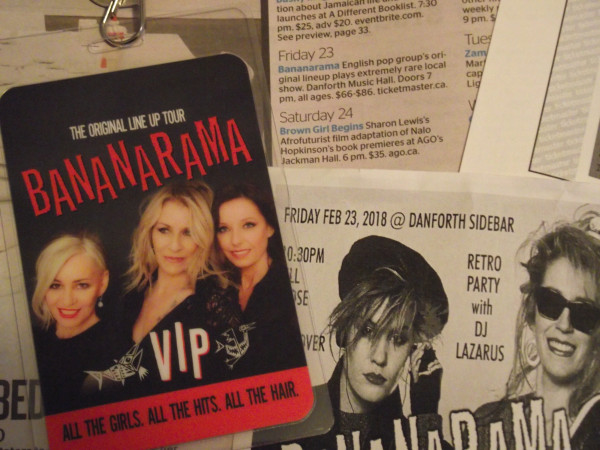 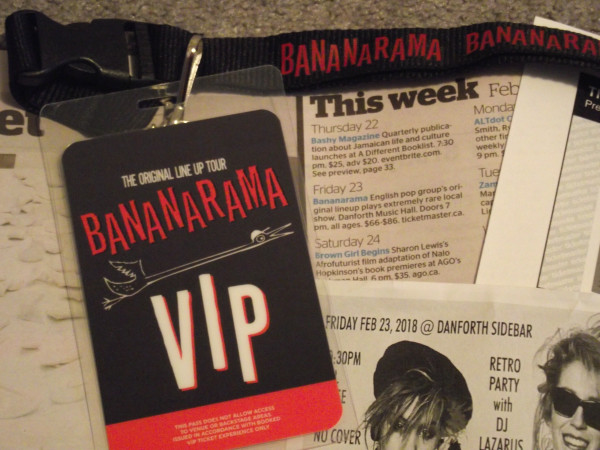