Bantustans: A Trek Towards the Future 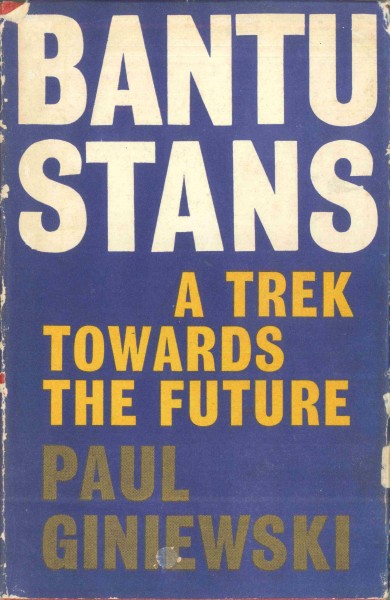 I bought Bantustans: A Trek Towards the Future by Paul Giniewski when I was in Cape Town three years ago. I wasn’t aware until I embarked on reading that it was a translation from the French. No translator was identified but it might have been the author himself, after I discovered his multilingual credentials. The book was published in 1961 and the author made an urgent case for the complete sovereignty of the African homelands known as the bantustans. Giniewski argued that the apartheid bantustan policy was justified because it returned the Bantu to their place. That is exactly what you’d expect to hear from the South African government in power in 1961: an attempt to legitimize the racial divide. They claimed that the entire southern part of Africa was uninhabited three hundred years ago and that neither the Afrikaners nor the Bantu lived there at the time. They were in effect both immigrant populations. To summarize, in the intervening three centuries the Europeans settled in certain parts of southern Africa and the Bantu settled in other areas. Bantu migrations continued southwest, spreading into the Afrikaner areas. The bantustan policy was drawn up as a benevolent ruse to return the Bantu to their original tribal homelands. Peace could only be restored throughout South Africa via this racial divide, a policy Giniewski urgently supports. He does make the point often and with italics that the bantustan policy must be fully implemented right now, which gives the reader the impression that he can’t wait to see the backs of millions of Bantu heads:

“And isn’t even the gradual emancipation of the Bantu, the policy of the Nationalist government of building Bantu states, in keeping with strict British colonial tradition, according to a process which is the opposite of integration?”

I realize the perspective wherein I read this book. Apartheid has been abolished for close to thirty years and the bantustans have been reincorporated into South Africa. This book should be treated as a museum piece and not as a viable solution to finding peace among the races. Thus I don’t wish to debate the author’s claims since I have history on my side which is all the proof I need. Instead I can only report on the abhorrent racism the author spouts in his depiction of blacks as “savages” and “uncivilized” (two terms which he does use repeatedly within the text):

“The Bantu is courageous in the face of disaster. He readily suffers famine for months–and rejoices at better times when they come. If he does not do much to bring about these better times, it is because the impatience and the imagination of the European are lacking in him. This lack of imagination and impatience makes him a very good worker in all the jobs which would seem unbearably monotonous to a European. On the other hand, this lack of imagination can cause a long series of mistakes when the foreman does not immediately spot a mistake.
“This faculty for repetitive work, this imperviousness to boredom, make Bantu brick-layers highly productive when they put up hundreds of standard-type houses: as soon as there is a diversity of form, their output immediately drops. Their capacity for adaptability is lower than that of the Whites. The effects of the Bantu’s ancestry are sometimes amusing.”

Giniewski tries to dig himself out of his own hole by saying:

“These are merely observations. As an American writer said: ‘What the author intends as description may appear to the reader as evaluation, and condescending evaluation at  that.’ The observations I recorded in South Africa do not indicate any kind of incapacity.”

I’m afraid that I’m not convinced. I can’t believe at times what I’m reading, but must ground myself that this is a pro-apartheid monograph from sixty years ago. This is how the author regards items up for sale in a market stall:

“The market in Durban is a great coloured bazaar. In the adjoining streets the crowd jostles in front of the gaudy shops with their windows full of trash, displayed everywhere as bargains, as sale goods and wonderful second-hand opportunities…”

The government policy was to deport black citizens from white areas to the ethnic homeland of their ancestors:

“The Government has, in fact, established the principle of grouping the Bantu resident in the “White” territories of the Republic under the reserves of which they are supposed to be the ethnic citizens.”

I just love the chosen verb here: supposed. Imagine all the black residents of Cape Town, for example. Their families may have lived in the city for generations. Yet some government official could come along and tell you that you’re an ethnic Xhosa, so you will be deported to the Transkei. This is precisely what would happen across South Africa, as blacks were forced out of “white” areas. Did the government bother to deport blacks to other black areas, in the interest of maintaining ethnic purity? Did they force Xhosa out of Zulu areas? Or worry if they were deporting Sotho to Swazi areas? Or did they only concentrate their efforts on removing the blacks from “white” areas? What if I applied this to myself: each of my grandparents’ families came from a different country, although all of my grandparents were born here. Nonetheless, their families all have been in Canada probably not as long as some of these black families have been living in Cape Town. Yet what if I was told to hightail it out of Canada to my “ancestral homeland”? Where would that be? Which European country would I be deported to? It would be a country I have never even set foot in. Same for the deported blacks out of “white” areas.

Giniewski promotes the argument that the bantustans should be absorbed into the surrounding High Commission Territories, then known as Basutoland (now Lesotho), Bechuanaland (now Botswana) and Swazliand (now eSwatini). The idea is that these territories are already divided according to ethnicity, so it would make sense to unite the tribes geographically and politically. The author states “I cannot see for what reasons Britain would be opposed to a union whose territories would form an economic unit.”. You’re telling me that you can’t see why they’d be opposed to this idea? Seriously?

For what it’s worth, the author concludes that the bantustans must be established (“and very quickly: tomorrow is now”) and that the white population must sacrifice both financially and materially in order for this to happen, as “the Bantustans it owes to the Bantu”. As it happened, South Africa granted independence to the first bantustan, Transkei, only in 1976. This “tomorrow is now” guideline still took another fifteen years to implement, and that was for just one territory. Three other bantustans would gain independence of South Africa up until 1981.

The book was overall a captivating read, awarded four out of five stars which shows that an argument can be presented well (yet nonetheless still not be convincing). It is a capsule of South African history from the time when international isolation was just starting to take effect, and when apartheid was viewed as the only correct solution.