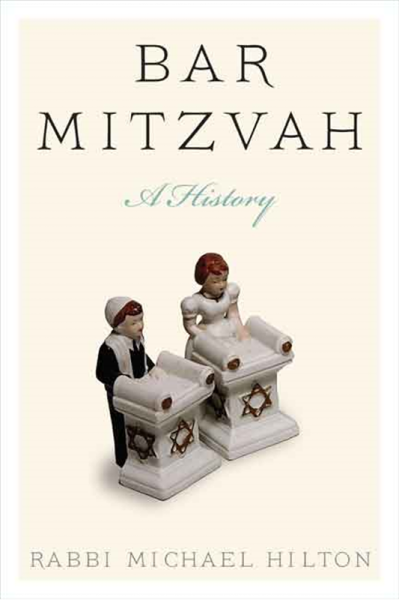 Bar Mitzvah, A History by Rabbi Michael Hilton is a 2014 publication which answered many questions I had about the Jewish ceremony. I noticed that this new book had arrived in our library and it looked inviting: it was a new publication, from 2014, had extensive endnotes, a lengthy bibliography and even a glossary for goys like me. I spent two weeks reading this, and took many notes for this review, which showed that I learned a whole lot of stuff about bar mitzvahs.

Rabbi Hilton starts by stating that bar mitzvah history is not as old as most people–even Jews themselves–think it to be:

“Both Jews and non-Jews attending a bar mitzvah ceremony or party imagine they are witnessing an ancient ritual.”

“It is striking to discover that bar mitzvah is not as old as people imagine it to be; the evolution of such a misperception is interesting in itself. Partly it comes from a thought process that says that because it is Jewish, it must be ancient, and partly from a related idea that festivals and popular Jewish celebrations have survived unchanged through the centuries.”

I have had the same reaction from the half dozen people I have asked about the age of bar mitzvah. All but one of the people I asked believed the ritual to date from biblical times. And had I been asked the question myself, I would have said the same thing. Rabbi Hilton uses the historical record to date bar mitzvah, and while he realizes that many traditions developed in stages over time, before one even considered them to be incorporated into future rituals, it was rare to write about their origins. He is aware that the origins of bar mitzvah likely predate their first historical recording, that from the mid-thirteenth century, in northern France.

A ceremony spanning over seven centuries constitutes what some might nonetheless still call an “ancient” ritual, but not as old as some people, including myself, originally thought. The format of the bar mitzvah ceremony has remained the same, with the boy of thirteen years being presented on a bimah (a word I learned from Scrabble, meaning a platform or form of podium) by his father who absolves himself of any future sins committed by the son. The ceremony developed into a ritual of voluntary acceptance of the age of religious majority. In preparation for the day the bar mitzvah boy, or simply the bar mitzvah, attended Hebrew school. Hebrew language instruction was offered in order to read from the Torah scrolls.

Religious instruction was meant to continue after the bar mitzvah ceremony:

“The simple ceremony of bar mitzvah marked the transition not to adult life but to the next stage of scholarly achievement.”

Yet the opposite occurred:

“The concentration on the ceremony as the main motivator for Jewish education has led to an undue focus on a one-time performance, rather than enculturation to a unique way of life. This has led to an unacceptably high dropout rate after the ceremony, a degradation of Hebrew language learning, and too many celebrations taking place outside the traditional congregational framework, as part of a vacation or on a cruise.”

So while the first bar mitzvahs took place in synagogues with a small luncheon afterward–yes, the emphasis on small–in time they spun out of control with the size of the parties and the families’ preoccupation with guest lists, menus and themes:

“The gradual spread of the celebration across Europe was accompanied by controversy and tension between those who thought of it as a purely religious celebration and those who promoted its social aspects.”

The focus of the bar mitzvah turned from a coming-of-age ceremony in the framework of one’s lifetime of religious instruction to a single compulsory performance, the preparation for which was abruptly dropped once it was over. By the start of the twentieth century, rabbis and congregations from all Jewish sects looked at the ceremony with loathing. I could not believe that this ceremony, now regarded with such honour and respect, could have been reviled by the rabbis themselves. The tradition almost died out:

“The twentieth century witnessed the most remarkable changes in the history of bar mitzvah, with the tradition in steep decline up to the 1920s. At that time it could easily have disappeared altogether from non-Orthodox synagogues; indeed, it really had been dropped by most Reform congregations.”

Why the decline? The event lost its religious significance for the families who participated in it. Rabbi Hilton wrote of the frustration many rabbis felt over the overall petty regard families had for the service, while focussing all of their attention on the party afterward. Congregations saw the bar mitzvah as just an excuse to hold a lavish party. It became the Jewish equivalent of keeping up with the Cohens:

“After World War II increasing affluence saw the start of themed parties, with lavish decorations and expensive entertainers. The ‘bar mitzvah cake’ with thirteen candles became a popular feature. Lavish parties in the United States provoked a good deal of criticism from 1950 onward, especially from Reform rabbis. Some critics were concerned with the disastrous effect on poorer Jews, who might feel they had to get into debt to host a bar mitzvah; others were concerned that the social aspects had eclipsed the religious significance or spoke out against irreverent behavior they had witnessed as guests at such parties.”

“There was an underlying difference of approach between community officials, who were determined to regulate the celebrations, and wealthy families, who were equally determined to show off their sons to their friends.”

Even by the start of the eighteenth century, rabbis were shaking their heads and sighing at the deplorable behaviour on display when you fill a temple full of thirteen-year-old boys:

“By the eighteenth century the social nature of many celebrations could lead to bad behavior by groups of children, as a Yiddish regulation from Hamburg-Altona makes clear: ‘New regulation of 24th Sivan 5472 = 28th June 1712. Every time a lad is bar mitzvah there is a great commotion among the lads, which creates a bad impression. So from today onward no party may be held in the synagogue and no treats for the lads at all. Any transgression will incur a fine of 20 Reichstahler for the welfare fund, with no exceptions.'”

I can just imagine a frustrated rabbi trying to keep a group of rambunctious thirteen-year-old boys in check. No party! No treats!

Bar Mitzvah, A History was only 225 pages long, but it was printed in a small font which I am happy to say I was able to read without a magnifying glass. Thirty-three pages were devoted to endnotes, which got tiresome to have to constantly flip to in order to see the source the author cited. I would often wait to flip to the end after passing ten endnotes, then play catchup, in order to retain the flow of reading. I was intrigued by someone I thought to be a supercentenarian when Rabbi Hilton wrote about Rabbi Yehiel Yaakov Weinberg, giving his birth and death years as (1884–1996) but in fact he died in 1966. Rabbi Hilton provided a glossary but one word I had to define elsewhere. I learned the Yiddish word ungapatchka, which means “overly ornate, busy, ridiculously over-decorated, and garnished to the point of distaste”, according to the Urban Dictionary. Rabbi Hilton used it when citing a description of modern-day bat mitzvah parties.

And it is that ceremony, that of the bat mitzvah, that I found most interesting in its history. Bat mitzvahs are a recent development, yet didn’t spring up out of nowhere. Girls and boys were at one time confirmed at a later age, usually fifteen. It was believed that young Jews got more out of their religious instruction if they were older. I read plenty of stories in this book about boys who stood on the bimah in tears, or unable to remember anything they had been taught in Hebrew school, so I can understand why rabbis felt a later ceremony was appropriate. Keep in mind that after the bar mitzvah, a boy’s religious instruction was meant to continue, and a confirmation was the ceremony to commemorate his latest completion of religious studies:

“The nineteenth century in Western Europe saw the decline of ceremonies for boys and the beginning of ceremonies for girls. Boys and girls often celebrated confirmation together. This ceremony, devised by teachers and modernist rabbis, emphasized belief rather than practice and becoming a good citizen rather than a traditional Jew. There was no need to learn Hebrew to have a confirmation, and therefore girls who had little or no Hebrew education could fully participate. But a heavy price was paid by the acceleration of the decline of Hebrew learning and Jewish knowledge. The history of bat mitzvah can only be understood in conjunction with the history of confirmation, a story that has been well studied but largely forgotten. Few today realize that confirmation was once common in Orthodox synagogues. Today’s bat mitzvah grew so gradually out of the group confirmation ceremonies that no single date can easily be assigned to the change.”

The ceremony of confirmation does seem to have been forgotten, as Rabbi Hilton suggests. No one I had asked in my informal bar mitzvah survey had even heard of it. There is plenty of evidence that proves confirmation was adopted from the Christian model, and Rabbi Hilton exposed some shocked reactions when Jews found out about its origin. Yet Reformers were quite open about copying Protestant models, so there was no sweeping of history under the rug when the ceremony was introduced.

The last fifty years have seen a revival in the religious aspect of bar mitzvah, while bat mitzvah is still a relatively new tradition that is still evolving. A higher proportion of Jewish boys is celebrating bar mitzvah than at any time in the past. The revival of bar mitzvah can be explained by a reevalution of the ritual by different Jewish sects:

“A clear turning point in the history of bar mitzvah came when many American communities in the 1930s decided to introduce formal educational requirements. This move was by no means inevitable; they could have allowed bar mitzvah to continue to decline and promoted confirmation as a modern alternative. But this was a time when Conservative and then Reform Jews began a long slow return to more traditional practices, which was boosted and reinforced by Zionism, the founding of the State of Israel, and the new usefulness of Hebrew as a living language.”

Bar Mitzvah, A History was written for Jews and non-Jews alike, just as Rabbi Hilton stated. It has a lengthy bibliography and the endnotes are full of secondary sources and research material, so I know where to turn to find further answers.