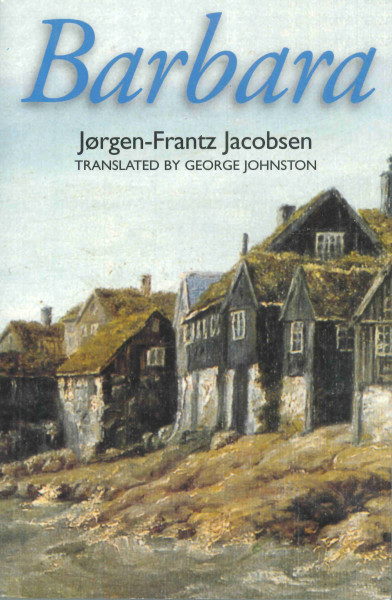 Barbara by Jørgen-Frantz Jacobsen is a classic of Faroese literature. It was originally written in Danish and published in 1939, one year after the author’s death. I read a new translation (by George Johnston) from 1992. The novel centres on the new pastor, Paul Aggersoe, and his relationship with Barbara Salling, the islands’ notorious femme fatale and, some might even say, murderer. Barbara had been married to the two prior pastors, both of whom had died suddenly. By the time of Paul’s arrival in the islands, the locals considered it a foregone conclusion that he would marry Barbara. It is no secret and not a spoiler to reveal that they do marry, but Barbara, however, pays no heed to her marriage vows and soon is off with another man. The pace of the novel is slow in the first half but picks up at the end as Paul tries to find Barbara.

I am reading all of my books about the Faroe Islands before my second visit to the islands this July. I certainly know what Faroese fog and rain are like (my flight back to Copenhagen was cancelled because of it) and I hiked across two islands during my first trip in 2003. Now imagine doing all of this hiking in the rain by lantern light. Such was the experience of Paul in his search for Barbara. Jacobsen accurately captured the look and feel of the Faroese landscape, such as in this passage:

“They had now rowed a full three hours. Suddenly the mighty Konufell lifted out of the clouds overhead, like a petrified roar. Rags of cloud still hurried by this broken mountain, hid the gigantic bluffs and then uncovered them, wrapped the crags and then laid them bare again, danced, drifted and mounted like smoke up through wet crevasses and fissures. The crew looked up as though into a giant organ, that was playing an inaudible but visually wild music.”

While Paul is presiding over Christmas services and visiting various islands, he is stranded on Mykines, the westernmost Faroe island, for over a week. During his absence, Barbara couldn’t wait to hop into a warm bed and flee across the Faroes with Andreas Heyde, for he was always lurking in the shadows:

“[Paul] knew now that a single danger threatened him. Andreas Heyde was always in the back of his mind, though he never named him. Neither did Barbara name him.
“Yet he was present, for all that, in their talk.”

The two go into hiding as they try to elude Paul. I will not reveal what happens to them but there are threats and deception that come out of the blue. The final chapter with Barbara and crew rowing out to sea is powerful. I could feel the calluses forming as if I frantically rowed along with them.

Although I read a modern translation, I still found the English to be awkward in places. Often I had to reread passages to understand them. I blame the formatting for most of my incomprehension. It would have been far easier to follow the story if quotations were not rendered within paragraphs by introductory em dashes. As a result I could not tell by sight alone when a quotation ended and the rest of the narrative resumed. I had to reread the paragraph to reset my mind when a character had finished speaking.