Battle Diary: From D-Day and Normandy to the Zuider Zee and VE I am glad I finally read Battle Diary: From D-Day and Normandy to the Zuider Zee and VE by Charles Cromwell Martin with Roy Whitsed. I had a personal relationship with the author, whom I knew as Charlie Martin, as he lived in the same condo in Mississauga that I grew up in. As a boy I was aware he was a soldier in WWII but never asked him about it. He was much more interested in asking about me and what I was up to. We always talked when we ran into each other in the building. He was the friendliest of gentlemen. If I dare to generalize I will say that children who grew up thirty years after the end of WWII were not aware of the sacrifices soldiers made or of the heroes living among them. Today, forty years after that, soldier testimonials and interaction with young students are both part of the primary school curriculum. I for one cannot recall any school visits by veterans. Remembrance Day was a day off school yet we learned about the significance of the poppy. That’s all I recall. It is my belief that the education system of today places a greater emphasis on teaching our students about the sacrifices soldiers made for their and ultimately our freedom.

2018 is the centenary of Charlie Martin’s birth, and I am finally reading his Battle Diary. I don’t know why I didn’t read it sooner. It was written in 1994 but by then I had already moved out of the family home (which placed me outside of my proximity to the author, but still). Charlie (I knew the author and always referred to him by his informal first name and will do so here) wrote about his time as a rifleman who stormed Bernières-sur-Mer (Juno Beach) on D-Day. Charlie’s reminiscences were conveyed in an oral style, the product of lengthy interviews by a knowledgeable interviewer. I didn’t find much suspense or drama, thus no white-knuckled tension as I read his war stories. This is likely the result of Charlie’s own modesty to downplay the life-or-death threat he lived under on a daily basis. In his vivid storytelling the reader can feel the muddy water next to his body as Charlie shared his experiences in narrow flooded trenches:

“About November 22 [1944] we moved to a new area south of the River Waal. The weather as always was cold and wet. We were asked to hold some low ground called the Waal Flats, an area about ten square miles. Our slit trenches kept getting wetter and wetter from the rising water. Patrols were difficult and we had a lot of them. One night we spent four hours stalking an enemy patrol coming in. Their ‘patrol’ turned out to be six sheep. We had mutton for supper.”

As you can tell from the above passage, Charlie could talk about tense wartime events even with a sense of humour, as in this account of a bayonet attack in a trench:

“After a few minutes we captured four of the enemy soldiers. Three of our group had been wounded. Joe Taylor had been shot twice in the back. One of the enemy SS–it turned out to be the patrol’s officer–attacked Frank Mumberson in his slit trench. Frank’s bayonet gave him a stomach wound that ended that business, except that because of the narrow three-foot trench, Frank didn’t have room to pull his bayonet out. This tended to upset both of them. In fact, we couldn’t tell who was shouting louder.”

Yet the poignancy was always there even as he fought hard to break past the enemy:

“Through all of this terrible aftermath of battle, French civilians were recovering the bodies of their own loved ones. The French were friendly and kind to us, but the tears were there and sometimes it was clear they had to try very hard to smile and wave a welcome at their Canadian liberators. We were welcomed warmly, there’s no doubt on that score. But many families had private grief, although they did their best to hide it from us.”

Battle Diary shied away from dwelling on Charlie’s grief either during wartime or forty years after. While he did talk about the tears he shed during postwar reunions, there was no time for tears in the heat of battle. If an enemy sniper shot and killed a friend and fellow rifleman, Charlie could only gulp and soldier on. One cannot stop to mourn the dead when one is on the battlefield. Charlie was a rare survivor of the first company that stormed Juno Beach. He had decades to ponder his fate and why he was saved when dozens around him died:

“All of us who survived must have been in the protection of God. Every man in that attack deserved the highest award a country can give, and the award they gave me belongs to everyone. The individual gets and wears the medal, but always with the feeling that he’s wearing it very much in honour of others who did so much.”

Battle Diary was supplemented by extremely detailed and beautifully drawn maps that illustrated Charlie’s invasions. I could follow along as he broke through enemy lines. They were a welcome aid to the text. Two large sections of photos showed Charlie and his fellow soldiers as well as the battle scenes. The final two photos were of Vi Martin, Charlie’s wife, who was a radar operator on artillery sites in England. Vi was Charlie’s beloved war bride, and his love for her permeated Battle Diary. It is fitting that the final photo is of Charlie and Vi hugging and kissing after seeing each other again after the war ended at Union Station in Toronto. The epilogue contained photocopies of letters Charlie received from fellow soldiers as well as letters from parents whose sons were not returning. Charlie wrote to those parents whose sons were in Charlie’s company. Each of the letters that the parents wrote back was touching in its calmness. The parents felt comforted knowing that Charlie was with their sons until the end yet the letters are pleading with Charlie for more information. That was the hardest part of all to read. 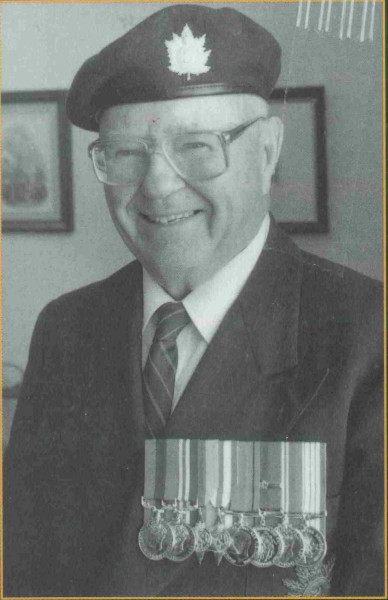 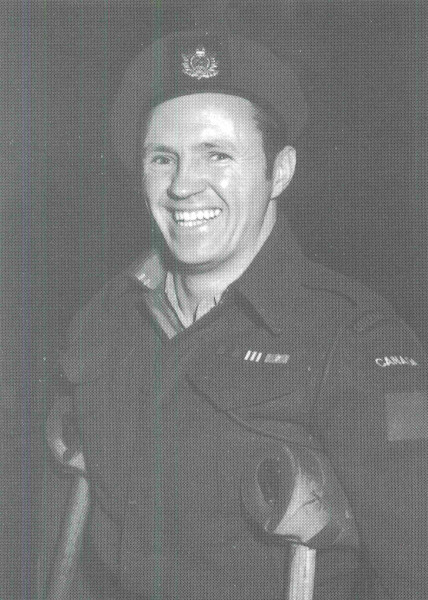 Charlie, grinning and on the way home after being injured at Sneek, Netherlands 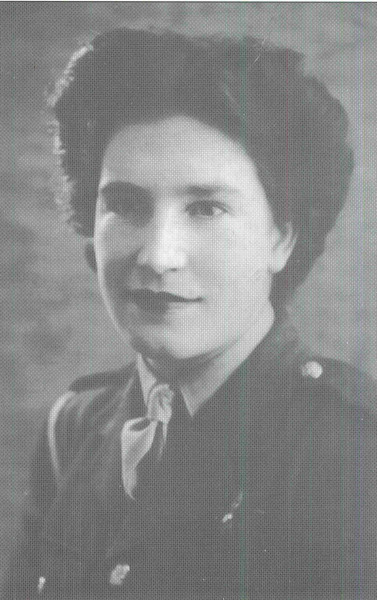 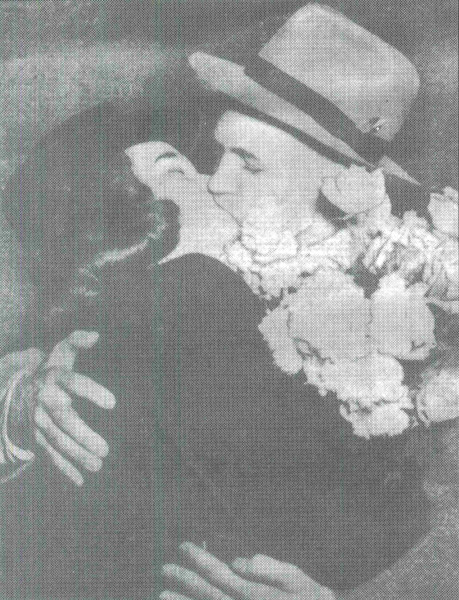