I picked up Be My Guest by Conrad Hilton when I stayed at the Milwaukee Hilton several years ago. Guests of Hilton hotels in addition to finding the standard free soap and shampoo also receive a complimentary copy of Hilton’s memoir, originally written in 1957. I started reading Be My Guest while aboard S. A. Agulhas II en route from Cape Town, South Africa to Tristan da Cunha. I finished the book on board and while I wanted to leave it in the ship’s library when I had finished it, the lack of Internet on board, both on my way to Tristan as well as coming back, precluded me from posting this review from the ship. Thus I have waited until my return to Cape Town to post this. 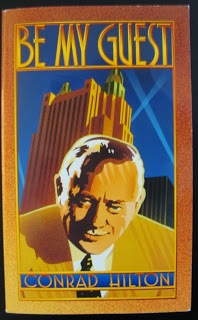 Be My Guest was an engaging story that I enjoyed reading each night. It was a can’t-put-down book, wherein Hilton documented his family story, often with humorous anecdotes, from the courtship of his parents and his boyhood growing up in New Mexico to his founding of one of the greatest hotel chains worldwide.

Each of Hilton’s parents instilled in him a guiding principle that he has followed all of his life. From his mother, Mary Laufersweiler Hilton, he learned the power of prayer and from his father Gus he learned the value of work. In addition to these principles Hilton added his own: that one must never be afraid to dream. And to dream big . And big is exactly how Conrad Hilton dreamt.

Hilton got his first taste of the hotel industry when a currency panic in October 1907 left his father nearly broke. His family soon realized that they had been literally sitting on a moneymaker:

“We had the biggest, ramblingest adobe house in New Mexico directly facing a railroad station on a main line. And we had my mother’s cooking. This added up to only one thing–a Hilton Hotel.”

Be My Guest had plenty of humorous moments and I can imagine Hilton himself laughing out loud as he recalled some moments from his childhood. I’ll bet he had a good time writing (or dictating) his story. Having such a devoutly Catholic mother kept a young Connie always on his toes:

“Almost as much as going to church or playing hooky, I liked going down the road to talk with Charles Hislie, the carpenter, or Carl Jenks, the village blacksmith and dentist. Mr. Jenks shoed horses or pulled teeth, whichever service was required at the moment. My brother Carl, after an extraction, claimed that he used the same instruments for both operations, but I have no first-hand knowledge of that.
“As I seldom had a toothache I loved to hang around Mr. Jenks’ emporium and smell the pungent hot smell and listen to the hammer ringing on the anvil. I also liked to hear Mr. Jenks cuss. He was very talented in that direction and to this day I believe he had as extensive a vocabulary as any man I ever met.
“This hero worship was rudely interrupted when an unsuitable word escaped my lips at dinner table. Mother was shocked. Gus paused in carving the roast only long enough to glare at me and say, ‘You stay away from the smithy.’ From that time I did, except on dental business when I was accompanied by my lady mother.”

Mrs. Hilton also features in an amusing story after her son had made his fortune in the hotel business. She could not accustom herself to having others do for her what she had proudly always done herself:

“My mother, I might add, never did modernize her views on tipping. When she lived for some years at the El Paso Hilton, this was a source of some amusement and much conniving on the part of her children. I, myself, would take her twenty or thirty quarters with specific instructions that she was to give one or two to any bellboy, any waiter, anyone, indeed, who gave her special service, depending on the extra amount of trouble it gave him.

“‘I’ll try, Connie,’ she’d say.
“And I would find out from my sister Helen that, as soon as my back was turned, she’d trot down to the cashier and have the quarters converted into dimes, with which she reluctantly rewarded any service she absolutely could not do herself. Ten cents remained all her life the most she could bring herself to tip.”

Be My Guest traces Hilton’s shift from buying banks to buying hotels. At first he took over older hotels and transformed them according to his vision. The Hilton empire of new hotels was not his immediate intention. Only after his frustration in having to renovate yet another older building did he consider starting to build his next hotel from the ground up.

It was however not a new hotel but the palatial Queen of all hotels, the Waldorf Astoria, that was his prime target for many years. Its prestige as the height of luxurious hotel accommodation and reputation for unparallelled service made it the diamond in the eye of the Big Apple. He dreamt of owning it one day, and this big dream of his would one day become true. Hilton wrote of his many offers and counteroffers, and offered his insights into the skills of negotiation and the honour in keeping your word with a handshake.

The Waldorf Astoria may be the Queen of his “dowager” hotels, yet he still had to revitalize it to meet Hilton standards. However even when confronted with a rather unfortunate reality of hotel ownership, Hilton can still elicit a smile:

“A wire from Carl at the Waldorf pinpointed this vague feeling. ‘Fellow in 202 bumped himself off last night. After looking at his room I don’t blame him. We have got to fix up those rooms.’
“I somehow doubted that the décor in 202 had driven the poor fellow to suicide. Unfortunately tired people, discouraged people have sought the impersonal solitude of a hotel for their unhappy business since time immemorial.”

One of the pleasures of reading Be My Guest were its stories away from the wheeling and dealing and cornerstone laying. I was absorbed not only in the stories of Hilton’s boyhood but also in the tales about his wives and children. Hilton’s second marriage was to Zsa Zsa Gabor which in retrospect he could see “was doomed before it started”. He recounted with heaving exasperation the countless times he tried to curb her spending habits:

“Glamour, I found, is expensive, and Zsa Zsa was glamour raised to the last degree. She also knew more days on which gifts could be given than appear on any holiday calendar. And then, of course, you could always give gifts because it was no special day at all and thereby transform it.”

“I have tried to instill sound business principles into my beautiful Circe, but I might as well have practiced on a statue in the park.”

Be My Guest, being that it was published in 1957 at the end of the communist red scare of McCarthyism, ends its final chapters with Hilton vowing to fight communism. The anti-communist tone seems like a time warp of a read for today’s reader, yet at the time the red menace was seen as a legitimate threat and proud Americans showed their patriotism by publicly fighting against it. To Hilton, his hotels bridged cultures by bringing the peoples of the world together as a united front against communism.

Hilton ends his book by listing his ten ingredients for successful living. His words of wisdom may help others realize their dreams. Herewith are the Hilton top ten:

Find your own particular talent.
Be big.
Be honest.
Live with enthusiasm.
Don’t let your possessions possess you.
Don’t worry about your problems.
Don’t cling to the past.
Look up to people when you can–down to no one.
Assume your full share of responsibility for the world in which you live.
Play consistently and confidently.