Beauty Queen: Inside the Reign of Avon’s Andrea Jung 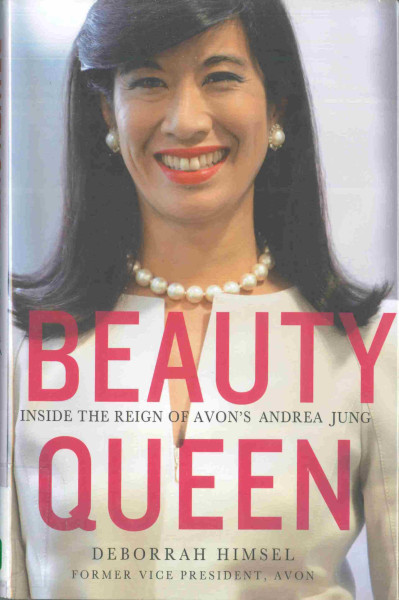 During the seventies my late mother was a door-to-door Avon representative, more commonly known as an Avon lady. My brother and I have truly precious memories of receiving the monthly Avon deliveries from company headquarters, then helping our mother package the orders for her customers. She even instructed us on how to elegantly staple the receipts to the delivery bags. My brother and I can still recall all the fragrances, both women’s and men’s, from over forty years ago. My favourite was Blue Lotus but my mom loathed it. I still have a wide assortment of Beatles newspaper articles packed away in old Avon boxes. Thus my attention was drawn to Beauty Queen: Inside the Reign of Avon’s Andrea Jung by Deborrah Himsel. Jung was born in Toronto and became the first woman CEO of Avon Products, Inc. The author Himsel was no outsider, for she worked with Jung as the vice president of Global Organization Effectiveness.

Beauty Queen was divided into two parts: the first was an account of Jung’s rise and fall within the company. This was by far the more interesting section. I was less impressed with part two, about the traits of effective leaders, and what to look out for and what to avoid in the hiring process. Even though Himsel used Jung as her example in the second part entitled “Broader Leadership Lessons”, I felt I could find this information in any leadership book. The main reason I picked up Beauty Queen was the corporate story and learning how Jung turned Avon around in achieving consistent double-digit gains year after year. Jung was the first woman CEO of Avon and she projected an aura that left everyone awestruck by her beauty and charisma. Himsel referred to Jung’s charisma repeatedly, and it was easy to see why. After a history of male CEO’s, Jung’s trademark pearl necklace, flawless makeup, Chanel suits, model poise, elegant grace and friendly demeanor made everyone fall in love with her. She had the company in the palm of her hand the moment she walked into her first executive meeting:

Her staff fell over themselves in their quest to please her. Having such a willing and able staff made it very easy to produce the results that she wanted.

While Jung possessed many qualities of an excellent leader, Himsel was not shy to discuss what may have led to her downfall:

“One of Andrea’s major derailers was being a pleaser; she avoided conflict and tried to appease others in order to maintain harmony, a tendency that can be traced back to the messages she received growing up. Andrea spoke often about how there were no disagreements in her house, especially at the dinner table, because disagreements weren’t tolerated.”

“As a leader, Andrea could make people feel special, and it helped create extraordinary loyalty and performance. Yet her tendency to avoid being the bad guy would be a recurring problem in her career.”

Thus in order to maintain her reputation, Jung may have turned a blind eye to poor performance. She has even been accused of ignoring scandalous corporate practices overseas, such as alleged bribery and corruption charges in mainland China.

Himsel made Beauty Queen a can’t-put-down read during the first part, “The Avon Story”. A few spelling mistakes during this section grabbed my eye, such as “JC Penny” [sic] not once but twice. I also cringed when I came upon “ying and yang” on page 57. Following each chapter Himsel reviewed the “Leadership Lessons Learned” and summed up the entire section with the seven factors that contributed to Avon’s and Jung’s fall from the top.