Becoming Who I Am: Young Men on Being Gay 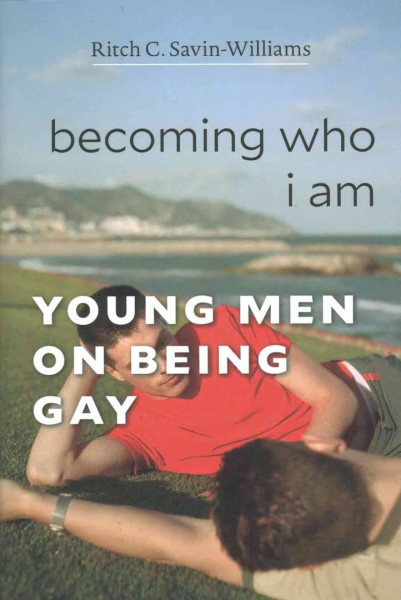 Becoming Who I Am: Young Men on Being Gay by Ritch C. Savin-Williams is a collection of interviews and transcripts from teens and young gay men covering a wide range of topics from first sexual memories, first arousal, puberty, porn, sex with boys and/or girls, coming out and so on. Savin-Williams interviewed these people at varying stages of their closeted or out lives. I have a problem with studies such as this. The data they present seem artificial and the presentation of interview material reeks of disingenuousness. It is thus wise to look skeptically at these works as they seem more a product of a researcher’s wishful thinking than a true representation of the world of his subjects.

I know I am in the minority when I claim that sexual orientation is a choice. I believe that homosexuality is a learned behaviour–thus entirely determined by one’s environment–and no one is born gay. I have my own theories for the development of male homosexuality and believe in all of the points Savin-Williams rejects below:

“In fact, none of the young men I interviewed described their sexual orientation as a ‘lifestyle choice,’ although several wondered whether they are gay because they had been seduced by sexual experiences with a cousin or brother. All creditable scientists would disagree. You are not gay because of sexual seduction, sexual abuse, being called gay at school, or being overly attached to your mother or alienated from your father. Even if all were true, these experiences didn’t make you gay.”

This is where I disagree. Yes, I do believe that sexual seduction, especially abuse, bullying and teasing can affect a child’s developing sexual orientation. Boys and young men of today who come out of the closet are mollycoddled to obscene proportions of counterfeit heroism. If I read another story about a lonely pimply-faced unattractive obese fourteen-year-old crying his heart out on social media as he comes out of the closet, I am going to run over to his house and point his nose towards a good psychiatrist. What he needs is not the sexual comfort of another young man but a confrontation of the issues that have deprived him of having any kind of healthy relationship with other boys and men. One young man in Savin-Williams’s study believed that:

Exactly! Had he grown up with a healthy relationship with his father, and developed friendships with other boys where he felt as an equal and not as their punching bag, then things would have been different. Growing up the victim of others’ ridicule from kindergarten on can ruin a child psychologically and, eventually, sexually. Many gay men will for the rest of their lives be pathetic whiny shadows unable to let go of their childhood playground victimhood. Their gayness is but a symptom of this childhood trauma.

Far too many of the young men Savin-Williams interviewed came from conservative communities or religious families. This did not seem genuine; I am sure the men self-reported these statistics in order to gain sympathy from the researcher. They might have thought that Savin-Williams would have been more willing to accept their homosexuality if they admitted to being from a suppressive home environment.

What I could not escape from the entire book was its creepiness factor. A sixty-year-old researcher asking young men about their masturbation fantasies and first sexual experiences reads like the gay version of a Harvey Weinstein audition. Are pre-teen and 13- and 14-year-old boys really having that much oral sex? I didn’t even know that the activity of oral sex even existed until I was sixteen. How could Savin-Williams have kept it in his pants as he reviewed the data? Twenty dollars a pop for fresh boner material every day. Scientific studies about the sexual activities of young gay men are as bogus as Pete Townshend’s “research” into child pornography. I do not buy the author’s pedagogical motives.

The only line that impressed me in the book was that pertaining to parental love and acceptance. Regardless of the sexual orientation of one’s child, a parent’s love should be unconditional:

“Perhaps most critical, though only hinted at in these interviews, was the nature of the parent-son relationship. If a parent truly loves a son, all else is irrelevant.”

Indeed. The polar opposite, where parents shun their child after he comes out to them, was also addressed. Savin-Williams blasted this kind of coming-out horror story as practically a myth.