Before the Refrigerator: How We Used to Get Ice 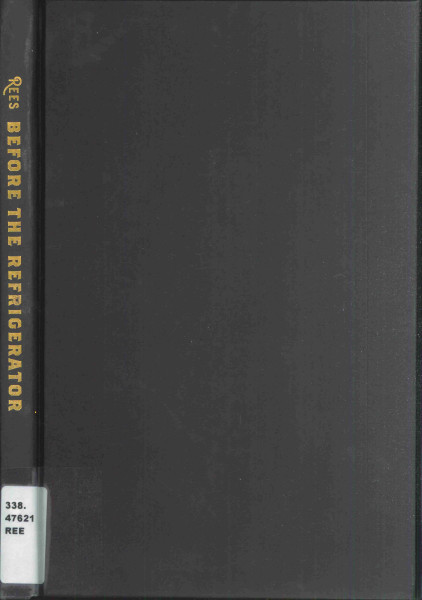 Before the Refrigerator: How We Used to Get Ice by Jonathan Rees was a brief and enthralling history of the ways people kept their food cold before modern refrigeration. The first electric refrigerator that was produced on a mass scale came out in 1927, Before then, people had to rely on ice to keep their food fresh. Rees wrote about ice harvesting and the industry behind it, which started with cutting the ice from rivers and lakes and ended with a system of delivering the ice door-to-door. He supplemented the text with maps and historic photos.

Technological innovation led to the development of artificially manufactured ice. Places where ice could never form naturally now had the capacity to make their own. Rees provided a wonderful map from 1905 showing all the US states and the number of artificial ice establishments in each. Customers preferred manufactured ice because it was made from pure water and had no sediment as was always found in ice culled from rivers and lakes. Ice produced in manufacturing plants could be designed to turn out crystal clear, which in spite of it offering no additional benefit to the product it was refrigerating, was nevertheless always a crowd-pleaser. People gravitated to thick transparent slabs of ice produced in factories over cloudy gritty slabs found in nature.

The capacity for all states to have ice available year-round had the profound effect of changing the American diet by preserving perishable food:

“The advent of artificial ice broke that stranglehold by making ice available in places where it did not appear naturally. Lower transportation costs drove down the price of the perishable food, which in turn increased the consumption of California produce.”

“Besides expanding the range of distribution for perishable products of all kinds, refrigeration cut waste due to spoilage. This increased the supply of all perishable products, which in turn lowered their price and therefore made it easier for more people to consume it. In some cases, the increased availability of ice also made those products safer to consume since they were preserved better throughout their journey along the cold chain.”

As artificial refrigeration developed, reducing the size of ice manufacturing plants, those in the ice harvesting industry could see the writing on the wall. It would not be long before people would be able to make ice in their own homes. There was still a market for natural ice as long as the places they were supplying it to lacked electricity and access to an ice manufacturing plant. The last ice deliveries in the US ceased in 1960.

As home refrigeration developed with the introduction of the electric refrigerator in 1927, consumers suddenly had a smorgasbord of foods to choose from. Natural ice wasn’t as cold as artificial ice, yet with a refrigerator in your home you didn’t need to worry about storing ice at all. You could set your fridge to whatever temperature you wanted and thus keep foods fresh for longer. Ice, regardless of its natural or artificial provenance, ironically spoiled food:

“The first attempts to use ice for cold storage involved placing the ice in direct contact with food. That method worked only with foods that could stand up to water–like fish. Anything else would end up soaking and moldy before too long. Once people realized that the ice had to be separated from the food, they built two-story warehouses with the ice on top and the food on the bottom, with holes in between to let the cold air circulate.”

I learned that the term icebox is in fact a retronym. The first appliances used at home to chill food were called refrigerators. Ice was stored in the lowest compartment of these refrigerators and the cool air circulated throughout the sealed compartment. With the advent of electricity refrigerators did away with needing huge slabs of ice. Those who bought one of these fancy new electric appliances had a new refrigerator, while those who still relied on slabs of ice to keep their food cold created a new name for their outmoded device: an icebox.

Before the Refrigerator was a short book of 104 pages and filled with endnotes. I found it however to be highly repetitious, and I rolled my eyes whenever I encountered yet again the line about ice increasing the diversity of American diets. Still, I never thought that I would say a book about the history of refrigeration would be such an interesting can’t-put-down read.