Beijing Confidential: A Tale of Comrades Lost and Found 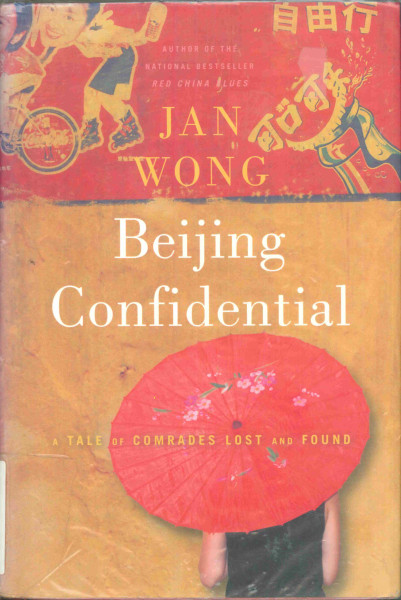 Beijing Confidential: A Tale of Comrades Lost and Found by Jan Wong is the sixth book I have read by Jan Wong (although it is not the sixth book that she wrote). This book is an incarnation of an international guilt trip. Wong was a student at Peking University in 1972 during the Cultural Revolution. As a dedicated Maoist, she informed the authorities when another student, a native-born Chinese woman, told her of her desires to visit the United States. This student, Yin Luoyi, was expelled from the university for her counterrevolutionary behaviour. Thirty years passed and Wong had forgotten about Yin. Yet a reread of her university diaries brought these memories back. Wong didn’t merely wonder what had happened to Yin; she was desperate to know her fate. Was Yin exiled? Was she condemned to a life of poverty or imprisonment? Or worse: was she executed? Wong was driven to find out what happened and if Yin was still alive, to locate her and apologize. No easy task–this was needle-in-a-haystack, Chinese-style.

Wong, her husband and two sons set off for an investigative holiday in Peking. She had exactly four weeks to learn what had happened to Yin, and then to try and find her. The book’s back cover and inside flaps never gave away the outcome, and of course Wong didn’t spoil it for the reader. I followed along anxiously with each new discovery, whether it be a new cellphone number or a new contact name. In between the hunt for Yin, Wong dedicated chapters to Chinese history and Peking history in particular. These were informative and necessary to the narrative. With Wong providing the history lesson it was guaranteed entertaining. I love her writing. She inserts personal asides, jibes and puns, as seen below in a reminiscence of her time in PR China in the summer of 1973, when she was both learning the Chinese language and working at the Number One Machine Tool Factory:

“For fifty days we operated lathes and pneumatic drills, counted screws and lived in dingy workers’ dorms. Erica and I loved it. Well, we didn’t like getting up at 6 a.m., and we hated counting the number of screws in a box, but we enjoyed substituting pneumatic drills for tonal ones.”

Traffic jams, the smog-obliterating sky, and buildings that are marked for demolition come up in every chapter. No one arrives on time for any appointment owing to the abhorrent traffic conditions. Everyone always has a ready excuse for tardiness. This seems like a running gag throughout Beijing Confidential. As Wong gets closer to finding out what had happened to Yin, plans risk being thwarted by dinner guests stuck in traffic.

Likewise, the sky is obscured by smog and Wong doesn’t see it again until her departing flight for home. I experienced the same smogginess when I was in Peking in 2011, except that I did get to see the blue sky after my Great Wall tour driver had driven hours beyond Peking city limits where I was delighted to see–and breathe in–fresh blueness. During Wong’s visit to Peking to find Yin, just prior to the summer Olympics in 2008, the city was blitzing to revitalize and reinvent itself. Not only buildings but entire neighbourhoods were slated for demolition. Wong states with sadness how much of the city she remembers from the early seventies has disappeared.

The Wong humour that I love is throughout this story even through times of intense pain. She and her husband decide to get a massage:

“I suggest a classic Chinese foot massage, which I’ve had before. You soak your feet in a tub of scalding water scented with herbs and rose petals; after a while someone comes and pummels your feet, gouges your arches and nearly yanks your toes out of their sockets. It lasts about forty minutes and is incredibly relaxing–once the pain stops.”

The bigger pain though is felt when Wong finally finds Yin and learns her full story. While Wong did inform the authorities about Yin’s confession about wanting to visit the US, Wong was not solely responsible for her expulsion from university nor for what had happened to her afterward. Wong’s was merely one of thirty such charges against Yin, whose counterrevolutionary thoughts and writings were already known to the authorities. Wong could not have known this, and bore the guilt of responsibility for Yin’s fate (expulsion? exile? execution?) for many years. We get to go deep inside Wong’s mind to travel the path towards healing and the easing of her guilt. Her candour is riveting. Each time she sees Yin, she must apologize to her, and Yin must go through the protocol of not letting Wong lose face. In doing this Wong was seeking exoneration from Yin, which she realizes was overbearing for Yin to endure all the time.

And so the search for Yin ended on a happy note. Yin did eventually get to visit the US, New York City in particular. She bore no ill will towards Wong, and Wong no longer seems haunted by her actions from decades ago.