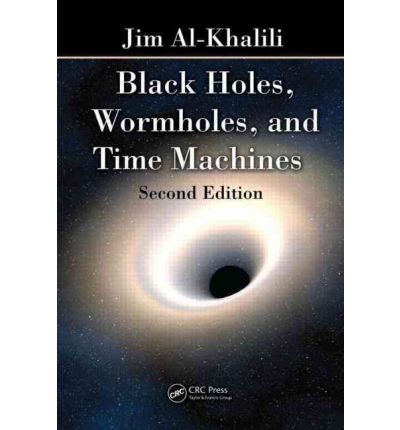 Jim Al-Khalili stated several times throughout the introduction to Black Holes, Wormholes, and Time Machines that he wrote the book for those with no prior background in science. He was going to talk about some pretty heavy stuff, like the theory of relativity, but would make it all easy to understand and with even a bit of humour thrown in. As a prime target for a book like this, I started the book twelve days ago hoping to be enlightened about the origin of the universe and all its quirky inhabitants like black holes, wormholes, pulsars, neutron stars and so on. That it took me a good twelve days to get through these 178 pages should tell you something: the basic science I felt was very early overshadowed by talk far too technical for me to grasp.

Granted, this book is classified within the physics range, and I admit to knowing far less about physics than about astronomy. The title and the cover however might lead one to expect that its main focus was either astronomy or cosmology. Al-Khalili did do a good job explaining the differences between these two space sciences. Yet I still felt utterly in the dark most times when he attempted to discuss some law of physics; Einstein’s theory of relativity, the theory of special relativity, or string theory all were lost on me. I felt that the only way I might have been able to understand these theories of physics in an astronomical context would be to provide the book with an accompanying DVD. I never seem to feel so lost when I watch TV shows about such concepts. Television graphics and special effects enhance the theories, while a two-dimensional page detracts from them. Al-Khalili did however include some diagrams which I appreciated.

Al-Khalili answered many questions that I myself have pondered over, including “If the Universe is expanding, but at the same time contains the whole of space, what does it expand into?” and “What is there beyond the edge of the Universe?”. The answers to these questions I did find easier to understand, and even fascinating. The concept of the beginning and the end of time will also leave you in awe, so I give Al-Khalili credit for these particular carefully thought-out explanations.

However as the book progressed, and we travelled into fourth dimensions and curved spacetime, where we propped up wormholes with “exotic” material and visited the past, I was totally lost. This was far too deep for a physics newbie, so after the first ten days where I crept through this book at a molasses rate, I just accepted whatever the author said in order to get myself closer to the end already. In spite of the initial wonderment I felt at learning some secrets of the universe, this book was an unpleasant chore to get through. Al-Khalili did try to keep the mood light throughout the entire book, dropping jokes and funny personal stories, which unfortunately didn’t seem to make the physics any easier to grasp.

This is the second edition of Black Holes, Wormholes, and Time Machines and it could have used an editor. The most common errors were sentences with two different conjugated verbs, as though his initial thought was to write the verb in the present progressive, but then opted for the more simple form while still leaving the form of “to be” in the sentence.

I do not feel that the author succeeded in trying to explain black holes, wormholes, time machines and a universe of other mysterious objects to those like myself with no prior background in physics. While Al-Khalili had a noble objective for readers such as myself, I would have found this book an easier read if I had already had a firm knowledge of physics.