Branded by the Pink Triangle 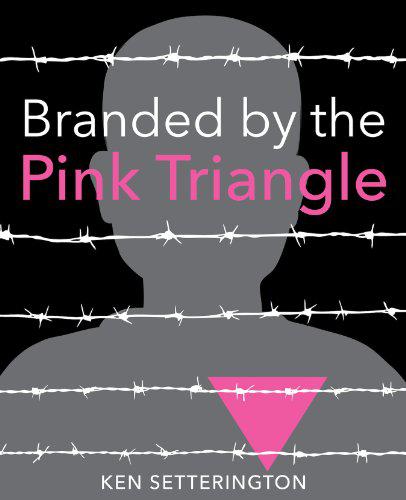 Branded by the Pink Triangle by Ken Setterington tells the story of the Nazi persecution of gay men. Setterington weaves survivors’ stories in a chronological history wherein they told about, at first, the harassment they suffered at clubs and bars, to the eventual deportation to concentration camps where all gay men had to wear a pink fabric triangle sewn onto their striped uniform. Branded also deals with the atrocities committed against gay men and the horrific conditions they endured in the concentration camps. This book had been classified by Library and Archives Canada Cataloguing in Publication as juvenile literature. I cannot disagree more with such a classification. In fact, my own library system has six copies of this book, and they are in the adult collection.

I raise a very weighty topic when I argue when is the appropriate time to tell children about the atrocities committed by the Nazis against Jews and gays. Without question, this history cannot be denied and must continue to be told. My reservation is that Setterington has ostensibly written a book for children yet the content within is so graphic I cannot imagine any child reading this on his own and not feeling wholly traumatized afterward. The cover, font size and plentiful illustrations all point to a junior format of a book. In fact, all five of Setterington’s other books owned by the Mississauga Library System have been placed in the Children’s Department, so I do not feel as if Branded was an exception, but rather that Setterington fully intended for children to read this. However I do wonder about the five pages of endnotes, and why they were in a work of juvenile nonfiction, and thus why Library and Archives Canada felt to classify it as such.

The target audience for such a book is likely not children in general, but rather children of gay fathers. Setterington described Berlin nightlife before the National Socialists came to power, when it was an exciting place for gays to be out and socialize. I found the description of the goings-on at sex clubs to be entirely inappropriate for juvenile literature. Repeated references to acts of “indecency” committed with another man, or of men who allow themselves “to be misused indecently”, do not belong in a book for children. The language, where Setterington used such slang terms as “queen” for an effeminate gay man, would be totally lost on a child reader under the age of ten. Just who was Setterington writing this book for? For the child of Perez Hilton? For the son of Brüno?

After the liberation of the concentration camps it is a sad fact that the gay men who were incarcerated were not set free. Since they were sent to the camps for being homosexual, and homosexuality was still a crime in Germany after World War II, gay men had to continue serving their sentences and were transferred to other prisons. It took forty years before any public monument was erected to honour the gay victims of the camps. Before then:

“The gay community was not even allowed to participate in the memorial services held at concentration camps or at war memorials. In 1970 gay activists in Amsterdam arrived at the National War Memorial in Dam Square with a lavender wreath to honor the gay men who had perished. The activists were arrested, and the wreath was removed and denounced as a disgrace.”

Setterington ended Branded with updates and photos of all the men he profiled. Sadly there are no more survivors who were branded by the pink triangle, as Rudolf Brazda died in August 2011. The bibliography provided a lengthy list of survivor memoirs which are essential reading for learning about gay history in Europe during World War II.