Last Thursday afternoon Mark and I left for Buffalo to attend the North American Scrabble Championship. We like to get to the tournament city early in order to do some shopping and to go on self-guided walking tours. Mark had printed out two architectural tours that we enjoyed (on one of them we were joined by David Postal). On Friday afternoon we registered for the tournament and I got a tournament T-shirt as well as a set of blue tiles. As with the tiles I chose at the 2014 Nationals, which also took place in Buffalo, my set this time had an incorrect distribution. I had 101 tiles, which included an extra A.

My tournament performance started out with a dreadful day one. I lost my first four games (which included, in game four, my first game ever with eventual NASC winner Joel Sherman) and was ranked last in 65th place after four games. I was given a bye in game 5. I lost the following two games and thus ended the first day of the tournament with a 1-6 record. I didn’t win my first game until round 8, and then lost the next two, so after game 10 my record was 2-8 and I was ranked 64th. What a dismal start.

After that I was able to turn things around, and I won fifteen of the following twenty-one games. My record ended up being 17-14 -244 with a ratings gain from 1804 to 1845. I was happy with my performance especially after going winless on day one, but thought nothing of my chances of winning any kind of class prize. It had never entered my mind that I might have stood to win such a prize. It wasn’t until I got home and went on-line to see the tournament results that I saw my name pop out as the fourth-place class prize winner in Division One Group B. Later on that evening I got E-mails of congratulations. Imagine that–going from 65th place to 25th overall, and winning a class prize. Anything can happen at a tournament, and I am living proof that you can recover after a disastrous first day.

I have included my bingo count for each round. My bingos are listed first, separated from my opponents’ by a virgule. My score is listed first.

[1] If Mack had played this bingo without the blank, it would have been DETRITAL.

[2] I was able to hook this bingo along four words (stacking OLES), scoring 103.

[3] Laurie played this bingo through the blank a in CaJOLES.

[4] If I had played this bingo without the blanks, it would have been ABALONE.

[6] If I had played this bingo without the blank, it would have been SKATOLE.

[7] If I had played this bingo without the blank, it would have been FLANGES.

[8] Immediately after Jeremy played this bingo, I under-hooked it with an A to make HARMONICA and VANED, scoring 50.

[9] If I had played this bingo without the blank, it would have been FILAMENT.

[10] I still cannot believe I let this phony go, after holding Greg on it. I knew it was phony after I released the hold. I had remembered, unfortunately too late, that the only acceptable bingo in HEADLI?E was HEADLInE. At the Mississauga Club years ago this came up in a game against Steve Ozorio. He had this rack, however with a blank, and made it a k, thus HEADLIkE. I challenged it off, and then prevented Steve from playing HEADLInE. I recall looking the rack up and seeing that it didn’t make HEADLIcE either. I worried that I might have blown the game because I let the phony go.

[11] Thomas had just played TAWIE, placing the E on the lower left TWS. My rack was CNOOSZ? and I saw ECOZONeS, scoring 134. Thomas challenged unsuccessfully.

[12] Jim played this bingo through the blank c in THORACIc.

[13] If Jim had played this bingo without the blank, it would have been FLAUNTED.

[14] After Jason blocked the more obvious place for this bingo, I was nonetheless able to hook it elsewhere (where I had not noticed before) along four words (stacking BAIT).

[15] I hooked the S onto my prior play of VENTING to make the phony VENTINGS (which I thought was acceptable). Michael held it but did not challenge. I had another place to play CrEWELS, hooking the end of Michael’s ZEBRANO, but the VENTINGS hook along the bottom TWS row scored more at 95. 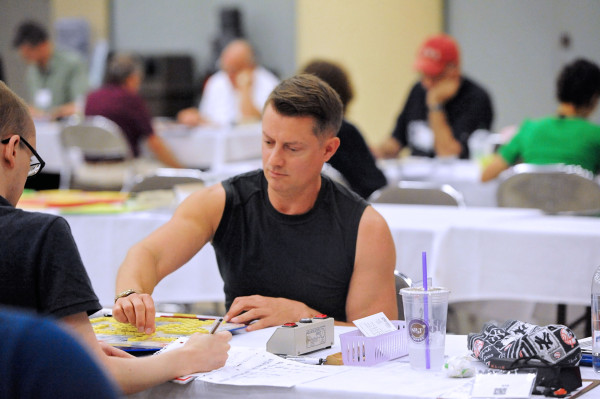 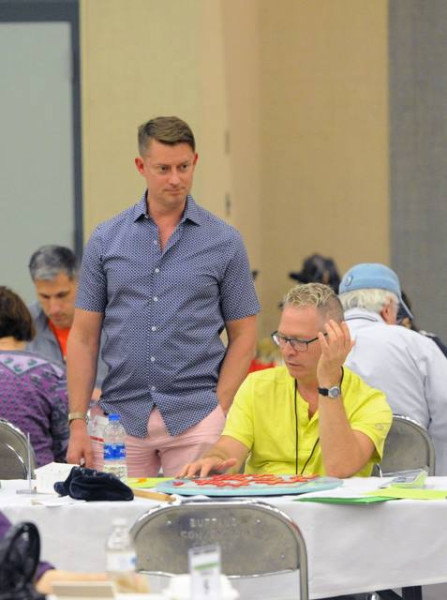 Going over Mark’s last game, prior to round 28.
Photos by Patty Hocker