I will remember the eighth Canadian National Scrabble Championship, or CNSCVIII, not for my mediocre performance but for the friends I spent it with. I had two houseguests from Thursday to Monday night, James Leong for four nights and Jesse Matthews for two. I was not expecting to meet either James or Jesse until Thursday night, yet while I was walking home from work around 5.30 on Thursday, I could see Jesse ahead of me towing his suitcase a block ahead. I was expecting to see him at the Mississauga Scrabble Club later on that evening. He had decided to walk to my place from the Square One shopping mall and make it to the Club for all three rounds. I had a little bit more housecleaning to do, so while Jesse and I chatted I raced up and down the stairs with the vacuum and clearing away dirty laundry. My Club codirector Shan Abbasi picked us up and we stopped off at a local grocery store so that I could pick up a birthday cake for my BF Mark.

When we arrived at the Club, who should we meet outside but James. I wasn’t expecting to see him until after I got home from the Club at 11.00. It was a pleasure to meet him for the first time. So my two houseguests got to experience the friendliness of the Mississauga Club and to enjoy a rich slab of chocolate blackout cake as well.

Since I am taking so much time off this year for vacations, I decided weeks ago that I would work the morning of the CNSC. I have never done this before as I have always had houseguests for this tournament and wanted to be at home for them. Yet this year I have had to nitpick the remaining vacation time I have left and realized I could really use the four hours I would ordinarily have booked off. So while I worked 9 to 1 on Friday, James and Jesse got to sleep in after their flights in from the west coast.

James rented a car which saved us from taking the transit. For this tournament I wanted to revisit the feeling of excited ignorance that I felt at the very first CNSC in 1996, when I took part without knowing who was playing in it. Back in the early nineties when I started playing in tournaments, there was no Internet and thus no cross-tables website. Players just showed up on tournament day and found out who they’d be playing against. So for this tournament I deliberately refrained from checking the player roster. I wanted to walk into the CNSC playing room and be surprised by new faces and friends that I hadn’t seen since the last CNSC or longer. It wasn’t until we stood up to sing the national anthem that I realized that some players, including a past CNSC champ and another top-three finisher, weren’t there.

On the Saturday night Jesse, James, Eric Tran and I went out for Persian dinner at Sheherzade dizi and grill on College Street. We narrowly escaped the rain once dinner ended. After dinner we joined Juraj Pivovarov and Randall Thomas for drinks on the pub patio across the street from the venue hotel. Sunday night though was the time to relax and stay up late.Our group plus Chris Williams and Mark Edelson were in the mood for Greek so I took them to Toronto’s Greektown on the Danforth and we sat outside on the patio at Mr. Greek and enjoyed the spacious exterior all to ourselves before the dinner rush arrived. It poured that evening as well but the canopies protected us and the rain was over by the time slow-eater me finished.

Jason Broersma had invited us to his house in Caledon for a party, so all of us with the exception of Chris and Mark took the fifty-minute drive north to my favourite place to go cycling, Caledon. On the way we stopped to pick up Gabriel Gauthier-Shalom, who lives literally across the street from my BF Mark. Over the course of this weekend James was using the name of his alter-ego “Gabriel Wong”, and he had even filled out his Mississauga Scrabble Club score slip with that name. I didn’t know what he was doing until the weekend wore on, but by the time we were all sitting in the car on the way to Jason Broersma’s house, everyone was calling James “Gabriel” and the real Gabriel, Mr. Gauthier-Shalom, was answering to the name of “Cesar”. Apparently there are strong physical similarities and mannerisms shared by Messrs. Leong and Wong and Messrs. Gauthier-Shalom and del Solar. I was amazed that Mr. Gauthier-Shalom never once answered a question intended for Mr. Leong when the latter was addressed as “Gabriel”.

My BF Mark and I have been up to Jason’s country house before, when it was still a work in progress. Now the house is almost completed and Jason The Builder should be proud of his supreme Scrabble house. When we arrived the house was full with guests: Chris Lipe, Heather McCall, Crayne Spanier, Risa Horowitz, Sue Tremblay and Roger Cullman and his girlfriend. Games were still in progress so all of the new arrivals headed for the Broersma bar and Sue pulled me some beer on tap. Then we joined the players and embarked on an evening playing Fry Your Brain. I love this game–and haven’t played it since the last CNSC at the pub across the street. We were all stumped at BUUW. We were playing Collins Fry Your Brain, which permitted BLUTWURST#. The TWL gives SQUAWBUSH as the shortest steal; a fine rear extension to SQUAW. James and I didn’t get back home till 3 a.m. It would have been even later if we had partaken of the invitation to join the others in the big hot tub.

The real purpose of us all getting together however was the tournament, and here are a few notes about my performance.

I finished with an even record at 9 – 9 yet had a horrid spread of -464. I suffered what has to be my greatest thumping ever in twenty years of tournament or Club Scrabble, from Jason Ubeika, who clobbered me 555 – 232. I just had to sit back and take it as he whipped my ass so red I couldn’t even sit down for the next game. I must congratulate Allen Pengelly for tying the record as the opponent who squeezed me into the tiniest thimble for a score. Zev Kaufman many years ago in a Montreal tournament generously allowed me to eke out a score just past two hundred. He and Allen threw me crumbs, as well as endless I’s and U’s and multiple turns where I had no choice but to exchange, to the score of 210. In neither game with Zev nor Allen did I go overtime. My sighs were heard across the room. I was praying to the tile gods not to send me into a four-digit negative spread after Allen trounced me. I was down to -881 when the Pengellator pengelled me. The tile gods heard me and I buried those two beatings into the back of my mind and changed my outlook. I may have had my Scrabble ass kicked by Jason and Allen, but I did win rounds sixteen through eighteen by a combined spread of +417.

Here are my bingos, followed by my opponents’:

In my game with Max Panitch I played a natural ZANDERS for 91. There was an open TLS and I thought about playing off ZA to score an easy 60+, keeping DENRS. As it turned out, Max took that spot leaving me without having to worry about what was the better move. At the beginning of the game, should I have taken the easy 60+ with my DENRS leave, or taken 91 points for ZANDERS? After ZANDERS I was ahead 161 – 69. I would eventually lose this game by one point.

If one does not draw many E’s, it might be a reasonable assumption to say that one does not stand a chance at winning this game. However in my game against John Robertson I could only manage to pick two of them, yet I did make my blank an e for MONOCLe. Coincidentally, John himself made his blank an e for OUTHeARS. So he played eleven E’s to my three. I managed to win that game in spite of the E-embargo against me.

Juraj Pivovarov had the opening move in our game. He considered playing the deliberate phony NONLITE* in an attempt to draw a challenge. He was hoping I would give him an E for his NONELITE. However, if he had played the deliberate phony, I would have seen right through it, and would not have given him any tile that would score him a bingo. Yet, in my case, I had the rack AADITW? and I myself was hoping to see Juraj drop an E or a V to enable me to play vIEWDATA / VIeWDATA. Had he opened the game with a deliberate phony, I maintain, as I told him that night while we were among other CNSC friends at the pub, I would have still opened with AWAITeD for 78. He would have snapped back with NONELITe for 74, as the e would have landed on the centre star. I don’t believe that it was strategically the better play for me to refrain from playing AWAITeD for 78, even if it gave Juraj 74 in return. Maybe, if Juraj wanted to open with an intentional phony, he should have played something else, and preferably a move that didn’t expose his entire rack. Yet what could he play that wouldn’t make me see right through his ploy? The mind reels at the endless possibilities on how to find the “best intentional phony”. Thoughts?

My game with Mike Ebanks was an unbalanced one-sider in my favour from the third move on. Mike had to exchange twice and lost a challenge early in the game. He drew both blanks but had difficulty, as many of us do, in finding a bingo even with dreamy tiles. By the time he found a bingo he was so close to going overtime that he speedily played it and in so doing, transposed two tiles. I had to apologize as I challenged it off. When I blocked this open lane, which had a D smack in the middle of the open row on the right TWS, he was left with only one bingo lane, a more difficult row where a bingo had to start with V and hook to make another valid two-letter word. Mike spent over four minutes until he could lay down VoCaLISE. It scored 87, but he had to subtract fifty points for going overtime.

The following photos of me at the tournament were taken by Sherrie Saint John:

Game 1 against Kristiina Overton. It was Kristiina’s first CNSC, and she finished tenth. Onnea! Why do I look so old in this picture? 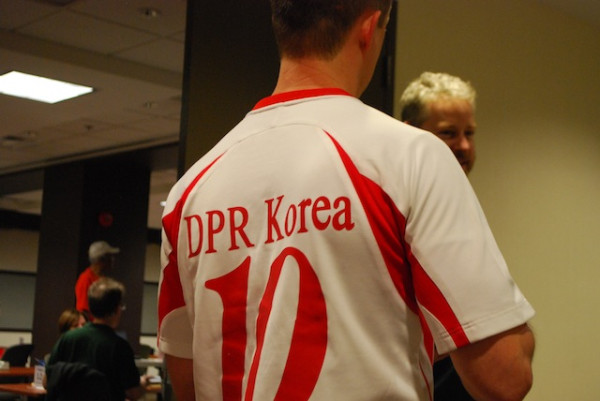 On Saturday I wore my football outfit (with matching shorts) that I had bought when I was in Pyongyang, Democratic People’s Republic of Korea. Mark Edelson is in the background. 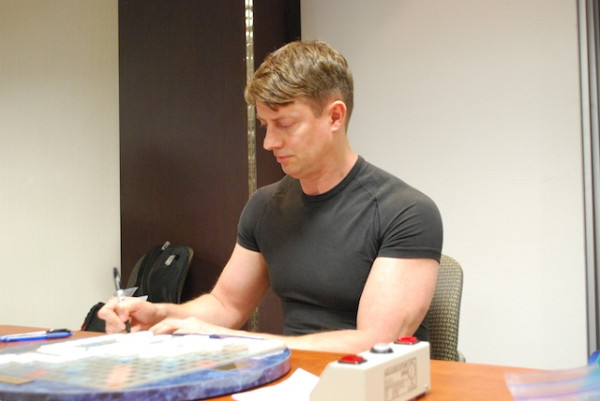 Game 18 against Chuck Abbate. I am starting to look like an old man!