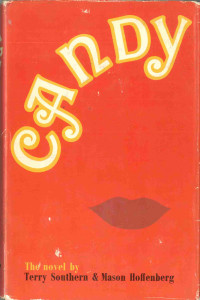 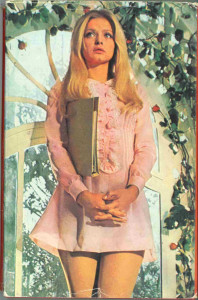 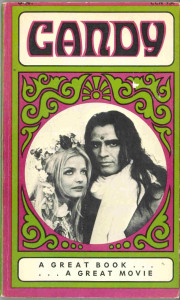 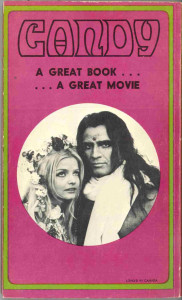 I bought both of these hardcover and paperback editions of Candy by Terry Southern and Mason Hoffenberg at Toronto record shows in the early eighties. The reason for the purchases was not solely literary. Ringo Starr had a starring role in the film adaptation from 1968, and both of these editions depict scenes from the film on the covers, although Ringo is not featured. It has taken me over thirty years to get around to reading this novel, and it is one of a very short list of books that I still have which I will discard or give away now that I have read it.

Candy is not the first Southern novel I have read; I read The Magic Christian while in high school, after seeing the film. Coincidentally, Ringo Starr had roles in both movies, yet “The Magic Christian” was more of a star vehicle for him. I also read Southern’s Blue Movie a few years ago in my great fiction clear-out. Candy however precedes them all by publication date. I do not know what this novel’s appeal was, judging from all the gushing praise on the inside flaps, but page after page was full of gratuitous sex scenes, several involving incest. The protagonist is a supposedly innocent high-school student named Candy Christian, yet she is silent as teachers, gardeners, gurus, doctors, even uncles and fathers, compel her into bed. The men have their way with her, and all Candy can do is coo and say “good grief”. The novel reads like a poorly made porn film set to print, and I suppose that was its intended purpose all along. The woman lies back and lets men live out their most intimate fantasies, exploring every orifice. With one exception, every man in the novel has sex with her, and what is the most offensive is that all the sex scenes would be called rape today. Candy lies back and lets it all happen in the name of self-discovery.

Conforming to a pornographic movie, the plot development in the novel is nonexistent. From one chapter to the next, Candy is transported on adventures, often without so much as a packed suitcase. From state to state, continent to continent and country to country, she is off and running in her sheer knee-high dress that always seems to crumple up and expose her curvaceous pearl of a stomach. Southern, who cannot be solely at fault as this incredibly bad novel actually took two people to write, and his coauthor Hoffenberg utilized more euphemisms for a woman’s private parts than I have ever encountered. Not since the days of riding in the back of a schoolbus during grade six field trips have I heard more offensive (and some downright laughable) euphemisms. I suppose if you were a middle-aged heterosexual man with zero personality and a lifetime of failed interactions with women in the late 1950’s, Candy was a print version of a wet dream.

The adventures Candy undertakes, the switcheroo between her father and his identical twin brother, Candy’s sudden devotion to Buddhism, whatever adventure the fifteen chapters bring is all just icing on a sorely overbaked sex cake. All have no importance in the development of the story. All that matters is the sex, and Southern and Hoffenberg definitely deliver. It is however dreadfully bad writing.

I was puzzled by these two printings, in that the hardcover edition was poorly edited. I compared the passage I read in the hardcover:

with the same passage in the paperback:

How did that happen?