It has taken me five months to write about all the books I bought during my unexpected extended stay in Cape Town last September. During my first trip to Cape Town in 2013, I went book shopping only after I had returned from Tristan da Cunha. Why go book shopping before my trip to the island, when I’d have to lug my books all the way to Tristan and back? This time, however, because my departure date for Tristan was postponed so often I decided to check out the city’s bookstores anyway. I wouldn’t feel as rushed as I was five years ago, since my ship’s departure date was still several days away. I could spend my whole day shopping and still have time for other excursions and museum visits.

As it turned out, I was wise to go book shopping before Tristan. I ended up reading three of the books I bought while on the island and travelling back to Cape Town. I was so anxious to go home once the ship docked in Cape Town that I managed to find a flight that same night, and had no time at all to go book shopping.

Three of the books I bought in Cape Town have already been read and reviewed. They are: Isle of St. Helena by Oswell Blakeston; War Below Zero: The Battle for Greenland by Colonel Bernt Balchen, Major Corey Ford and Major Oliver La Farge; and Lesotho 1970: An African Coup under the Microscope by B. M. Khaketla. I bought most of the books at Clarke’s Bookshop and Select Books, both stores very close to one another on Long Street. Language in South Africa dealt with all the language families, and among its 24 chapters had the most interesting topics on South African English, the sociohistory of clicks, German speakers in South Africa, the decline of Indian languages, pidgins, intercultural miscommunication, and women’s language of respect. Practical Handy Easy Zulu (PHEZulu): A beginner’s course by J. B. Townshend I found at Mabu Vinyl, a second-hand record and bookstore. It was cheap: only R20 (= just over two Canadian dollars). Learning Zulu: A Secret History of Language in South Africa by Mark Sanders is the author’s exploration learning the Zulu language, and how a language’s history and politics influence a multilingual society such as South Africa. Teach Yourself Afrikaans: a complete course for beginners by Helena van Schalkwyk was one of two books I bought at Protea Books, a large academic bookstore on Sir Lowry Road. I had to tear myself out of there. I salivated over the enormous selection of books on African history. The second book I found at Protea was Gough Island: A Natural History by Christine Hänel, Steven L. Chown and Kevin J. Gaston. I let out a squeal of delight when I found this, because I had read about it in a back issue of the Tristan da Cunha Newsletter. Gough (pronounced GOFF) Island lies 350 km southeast of Tristan da Cunha and is uninhabited except for a staffed meteorological station. The South African research vessel S. A. Agulhas II travels to Gough annually to bring over a new met station crew and to restock the island. The Agulhas stops at Tristan en route; I took this trip five years ago. This book has beautiful colour and black-and-white photos as well as plenty of text, outlining the history of the met station and the animals, birds and vegetation found on the island. Invasive species are also covered, such as mice. I have long been interested in the South African bantustan policy and their quasi-independence of South Africa. I bought many books on this subject five years ago and I filled my suitcase with more this time: The African Reserves of South Africa by Muriel Horrell was published in 1969 by the South African Institute of Race Relations. It includes a colour foldout map of the bantustans and descriptions of the agriculture, mining, forestry and other industries and demographics of each homeland. Bantustans: A Trek Towards the Future by Paul Giniewski was published in 1961, wherein the author wonders how much independence should be granted to South Africa’s non-white population. Giniewski believes in a Zionist solution to the “problems” of the South African Bantu. 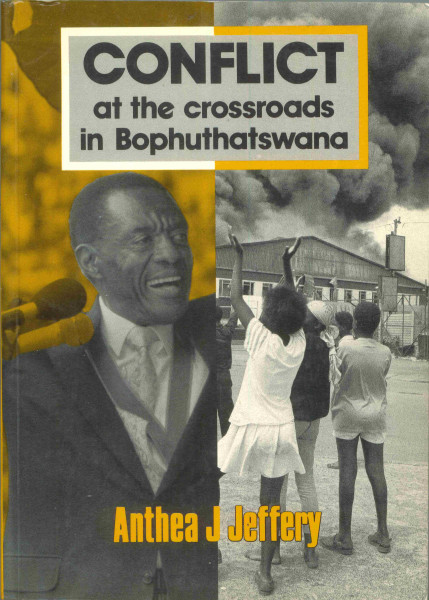 Fruits of Apartheid: Experiencing ‘Independence’ in a Transkeian Village by Julia Segar was autographed by the author. Segar focussed on the citizens of Transkei and their response when their homeland achieved independence from South Africa in 1976. 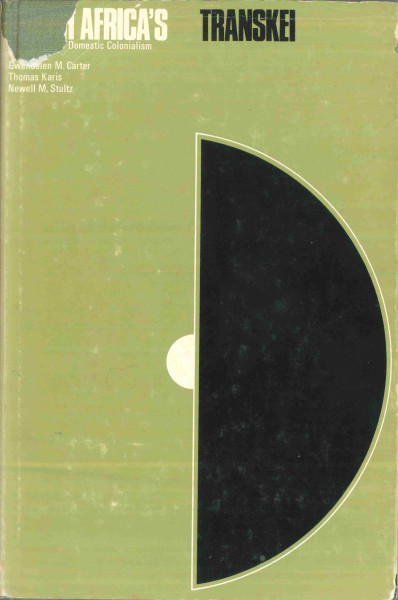 I bought South Africa’s Transkei: The Politics of Domestic Colonialism by Gwendolen M. Carter, Thomas Karis and Newell M. Stultz at the book sale at the Cape Town Central Library. This book was published in 1967 and gives a history of the region and the conception and creation of the bantustan known as Transkei. 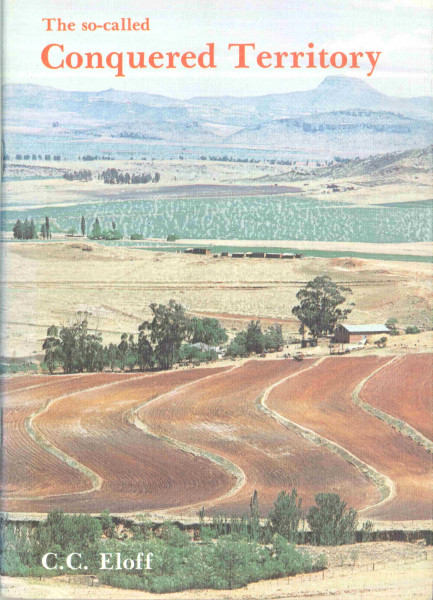 The so-called Conquered Territory: disputed border area between the Orange Free State (Republic of South Africa) and Lesotho (Basutoland) by C. C. Eloff sets the tone by the title alone: so-called. A propaganda tract, whose blurb on the back cover says it best: “Lesotho, who has incessantly laid claim to parts of the eastern Orange Free State, the so-called Conquered Territory, is disputing the legality of the boundary between Lesotho and the Republic of South Africa. This dispute has been the source of trouble for many decades. Three frontier wars, the disappearance of the Orange Free State as a republic, the independence of Lesotho and South Africa, have not removed the irritation. The problem is best understood when the ignorance about this disputed boundary and the so-called Conquered Territory which it encircles becomes clear. Even people reputedly well informed show a surprising lack of comprehension about this.” I found The Basuto by Hugh Ashton in the rare books room at Clarke’s Bookshop. It was published in 1952 and is a small-type, densely packed 355-page history of Basutoland, known after independence as Lesotho. The book contained many black-and-white photos as well as a foldout map. I was thrilled to find Sobhuza II: Ngwenyama and King of Swaziland by Hilda Kuper at Select Books. Where else can I find books on the South African bantustans, Lesotho or Swaziland but in southern Africa? Kuper gives the story of King Sobhuza II’s life up to 1978 in a weighty, small-type tightly packed book. There are hardly any paragraphs and its 363 pages belie its true heft. Liechtenstein: What You might Like to Know by Felix Marxer cost me a single rand and contained a colour foldout map. It was a mere 32 pages and had no year of publication but I think it must be from the early seventies. What a coincidence I decided to write a blog post about all the books I bought in Cape Town now, because Paul Barbato of YouTube’s “Geography Now!” channel uploaded the country episode about Liechtenstein only hours ago: I have many fond memories of Liechtenstein, a triglot published in 1975. When I was a child I loved to look at the tourist pamphlets housed in narrow dark green easily crushable plastic boxes at the Mississauga Central Library. I loved countries and the world’s micronations, even from a young age. My library had this small book in its own Liechtenstein pamphlet box. (The library also had a reference-only book on Liechtenstein which I wonder now why it was kept as reference in the first place. It was probably never used and would command a high price today being as it was a book about Liechtenstein in English.) I signed out this small book, catalogued as an unidentifiable pamphlet, over and over again. I was taken back over forty years when I saw this in the book sale area. It was packed with black-and-white photos.