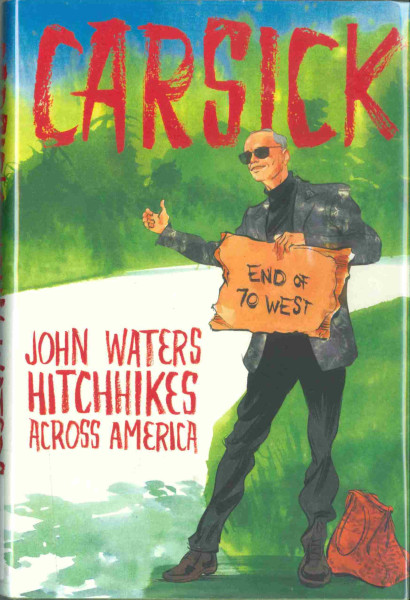 In 2012 John Waters hitchhiked from his home in Baltimore to his apartment in San Francisco. He wrote about his experiences thumbin’ rides across the USA in Carsick: John Waters Hitchhikes Across America. I am a huge fan of Waters and have read three of his other books, including Role Models. With Carsick I was prepared for a hilarious few days at work where I always read during my lunch and dinner hours. My colleagues no doubt would have to deal with me trying in vain to keep my food in my mouth for all the laughing I was in for. Carsick was divided into three parts; the first two parts however had nothing to do with Waters’s actual hitchhiking adventure. Waters spent two thirds of his book writing at first fantasy dream hitchhiking tales, where he got picked up by hunky truck drivers and finding the man of his dreams. The second part of the book was devoted to fictional disastrous hitchhiking experiences. Unfortunately, none of these stories were very funny. With Waters, he doesn’t need to make things up to get laughs; his gift is in the way he chronicles reality as he sees it. The more I read the fictional hitchhiking stories the more I wondered if he really had enough true adventures to fill a whole book. Were the fantasy and disaster stories all an afterthought? Was hitchhiking across the country less adventurous (or easier) than he had thought, and the fictional best and worst that could happen only literary padding? When I look at the notes I took, I hardly wrote a thing until after page 192, when the section entitled “The Real Thing” began, which shows that I didn’t find the fiction all that interesting.

Waters has a wicked gift for description, and he can complete an entire picture with only a few words. I can’t control my laughter at his degree of perception. For example, when he is forced to stand on the side of the road holding out his cardboard sign in a downpour:

“You can’t imagine the misery of waiting for a ride in the endless pouring rain.”

“…I’m sure I now look like a sopping-wet junkie Mary Poppins.”

The number of people who recognized Waters when they picked him up was about the same as those who didn’t. Those who did not often thought he was a homeless person or a drug addict, and many drivers insisted on giving him money.

Waiting by the road, never knowing when your next ride is going to pull up, can get discouraging very quickly. Waters wrote down all the time he spent in a day hitchhiking compared to the time he actually spent travelling in someone’s car. Needless to say, there is a lot of wasted time standing around doing nothing when you plan to hitchhike across the country. You can feel his frustration:

“Once again I’m stuck. Nobody stops. I stand here for four more hours. What the fuck am I gonna do? Maybe no one will ever pick me up!”

Yet instant relief when someone pulls over:

“It’s always a shock when someone actually stops for you. It takes a second to sink in, and then you panic, grabbing your stuff, afraid people will change their mind and pull off.”

Waters frequently drew references to his own films, which might be required viewing before you pick up Carsick. Oddly, after he made the above comment about indecisive (or prankster) drivers pulling off as the hitchhiker approaches the car, he didn’t mention the scene in “Pink Flamingos” where Divine does precisely that, cackling while driving away, as the camera angle makes it seem as if the car itself is rocking uproariously with her.

Still, from coast to coast, Waters has trouble catching lifts. Truck drivers swoosh by, sometimes yelling out an apology for not stopping. While checking in at a motel, Waters says to a man waiting with him in line:”I tell him truckers can never pick up hitchhikers these days because of all the restrictive new rules, but he says without missing a beat, ‘Well, believe me, they’d pick you up if you had a vagina.'”

I was on the floor reading the next passage:

“Then one of the staff of the rest area walks out of the building and heads toward me. ‘You can’t hitchhike,’ she says flatly. ‘The cops told me it was okay, and I’ve been hitchhiking in rest areas all across this state with no problem,’ I lie, almost with an attitude. I notice this lady has few teeth–maybe the staff is work-release from prison, I think, instantly dentally profiling her. Suddenly her whole face changes in surprise, ‘Are you John Waters?!’ she shouts with sudden friendliness. ‘Yes,’ I say, completely shocked that she recognizes me. ‘Okay, you can stay,’ she says with a complete law-and-order turnaround. I know I should be mad she was shitty when she didn’t know who I am and now practically kisses my ass when she does, but when you’re hitchhiking your usual value system collapses.”

As Waters travelled further westward, he rejoiced when he crossed into Nevada:

“We see a sign for a town coming up actually called Oasis, Nevada. When we pull through this, I would imagine, once highly anticipated burg, all that is left off the freeway are about five dilapidated buildings, deserted, rotted, and boarded up. What happened? Who was the last to leave? Are there squatters inside? What a perfect village–its name itself is a lie!”

Observations like those are why I enjoy Waters as a writer. He could be sitting on my couch telling me all about his cross-country thumbing adventures. His writing style resembles rapid conversation and since the oral element is so pronounced, I reread all the funniest parts, because they seemed like jokes after all. Who doesn’t enjoy reading, or listening to, a hilarious joke, even the same joke, over and over?

Waters seemed quite surprised by the level of uxorial devotion expressed by his male drivers. Behind every one of his married male drivers was a great woman. Life on the road for these men gave them plenty of time to think, and to be thankful and grateful for the women they had at home waiting for them. Waters seemed genuinely touched to hear these men confide their deepest feelings they had for their wives. In spite of having written an entire section on hitchhiking horrors, Waters never met anyone like Ted Bundy. He ended his coast-to-coast trek with a sense of pride in American spirit and generosity.