Checkpoint Charlie and the Wall: A Divided People Rebel 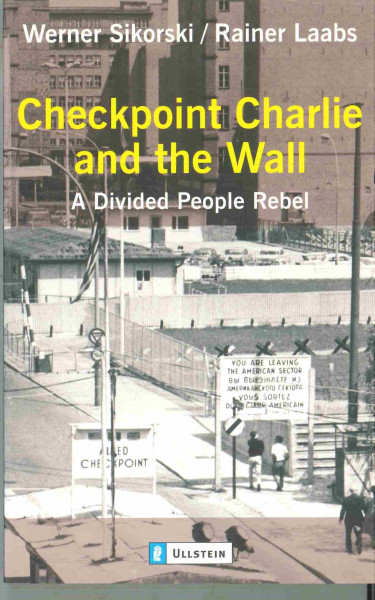 I picked up Checkpoint Charlie and the Wall: A Divided People Rebel by Werner Sikorski and Rainer Laabs (translated by George Bailey) when I was in Berlin in 2010. Its title is really a misnomer, as I was under the impression that it would be specifically about the American checkpoint between East and West Berlin. Instead the book was a general history of the Berlin Wall, with Checkpoint Charlie only mentioned in chapters about the Wall’s history. A more thorough examination of the book would have made this evident so I can only blame myself for buying it on impulse.

Checkpoint Charlie was filled with black-and-white photographs, which made the read all the more interesting. I did not know that East German diplomats were among the most notorious smugglers of goods as well as people. They supplemented their incomes by using their diplomatic immunity to bring objects–as well as paying East German citizens–over the border with them. I also enjoyed the detailed history of the East’s gradual opening of the border to allow West Berliners to visit. There were no authorized visits during the first two years of the Wall’s construction, but near the end of the 1980’s the East needed so much money that they were issuing lengthier passes to Western visitors.

Another fact I did not know about was that as late as August 1985, there were clandestine plans in the East to invade the West. The book included an invasion sketch of all of Berlin, showing the Soviets’ crossover points into the three allied sectors. We can only wonder what would have happened and what the world would be like today if the Soviets had in fact invaded West Berlin.

This book is a translation, and a fairly good one, but at times the sentences seemed stilted. In these cases I wish the translator had rephrased the sentences. There were some significant errors in the book, however. I was quite taken aback from the blurb on the back cover:

“Why was the Wall built? What did it mean to live in its shadow? And last but not least: Where did it stand? This documentation, illustrated with unusual pictorial and cartographic material, takes the reader through five momentous centuries of German history.”

Five momentous centuries? How far back do we need to go in order to understand why the Wall was built? Clearly the writer meant decades. There was also a mistake in the years when Sikorski and Laabs wrote about Wall protestor John Runnings, confusing 1968 and 1986. I read the earlier date first, yet the rest of the story didn’t make sense until they repeated the date later, but this time it was 1986.

Checkpoint Charlie and the Wall provided a brief history of the Berlin Wall, from the years before it was erected to the years following its fall, yet a lengthier history will be found in the fifth and final book in my Berlin reading project.