Circumnavigating Tristan on a fishing day

(I have just arrived in Cape Town after a week’s trip aboard the Edinburgh from Tristan da Cunha. I have found a flight that leaves for Toronto tonight. I will update my blog within the next two hours when I have to leave for the airport, and during my stopovers in Amsterdam and Boston.)

Four years ago when I was on Tristan Shaun Green, whose house I am staying at, asked if I was interested in joining the fisherman during a fishing day. The weather was so bad during my three weeks on the island that I never had the opportunity. Shaun remembered his offer and told me the forecast for Wednesday, October 11: calm water, clear sky and low winds. Those were perfect conditions for a fishing day. Was I still interested? You bet I was.

When a fishing day is announced, a “dong” is struck in the early morning to notify the island. The dong is really an old gas canister which is struck by a mallet. Shaun is responsible for striking the dong. I was awakened at 4:25 to a lengthy series (usually 33 strikes) of a resonating pinggggg that rouses everyone, including all the island dogs whose barks will wake you if the dong doesn’t. I was excited: I would take part in the island’s major industry, fishing, and in the process circumnavigate the entire island for the first time. Goin’ fishing. I think I look the part.

I headed down to Calshot Harbour at 6:20 and watched the bright orange fishing boats get loaded by crane into the water. I was not going on one of those boats, but rather the Sea Spray, the lead boat in charge of all the others. The Sea Spray was slightly larger and could accommodate its two regular fishermen plus a hanger-on like me. The Sea Spray always leaves last, so we didn’t get in the water until 7:25. My fishing companions were Larry Swain and Andre Repetto. Our boat was loaded with lobster traps, empty lobster trays ( = boxes for storing the lobster) and two enormous buckets for storing fish. We headed in a clockwise direction. I was going to fulfil a dream of mine while here: circumnavigate Tristan. I have not seen all sides of the island. I saw all of the west coast when I sailed to Nightingale Island four years ago, yet not the east.

Tristan da Cunha is populated on the northwest part of the island, as that is the only location with flat land. The rest of the island is cliffs, and only a small rim have narrow beaches. Sheep grazed on some precariously steep cliffs, and rockhopper penguins numbering in the hundreds toddled as their name suggests in a rocky oasis called the Rookery. The sight of 1000-metre cliffs rising straight out of the ocean left me awestruck. Blanketed in green with gravity-defying trees clinging to the edges, the rocky cliffsides were painted in grey, brown and orange. Trees do grow on Tristan, and some of them very tall in dense forests, yet they are no longer plentiful around the settlement. As we rounded the island’s southern coast I saw the Cave Point rocks and both Nightingale and Inaccessible Islands through the haze. 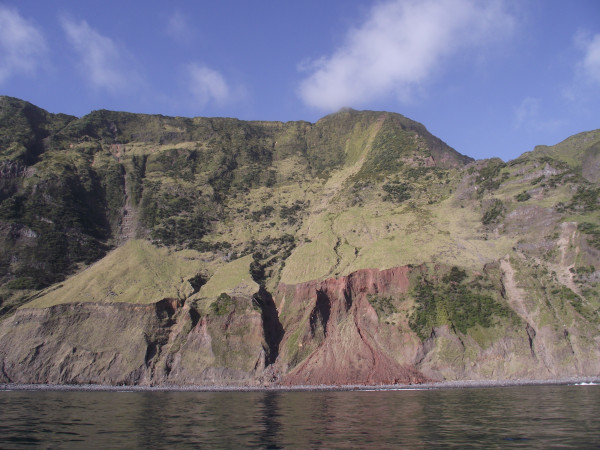 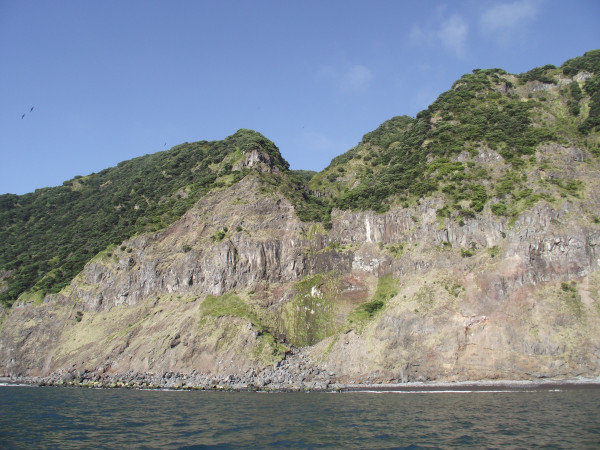 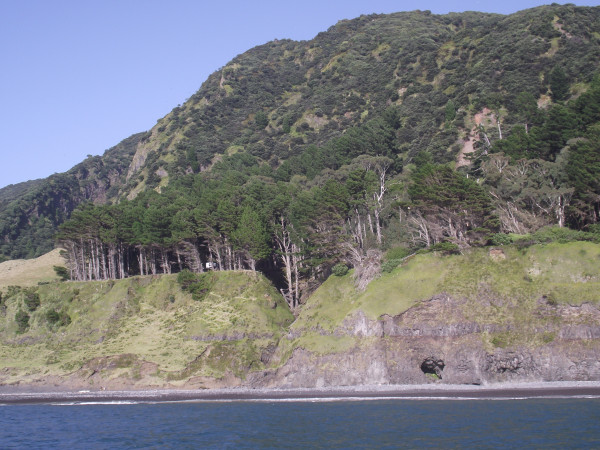 The forest at Sandy Point. There is a white shack amidst the trees. 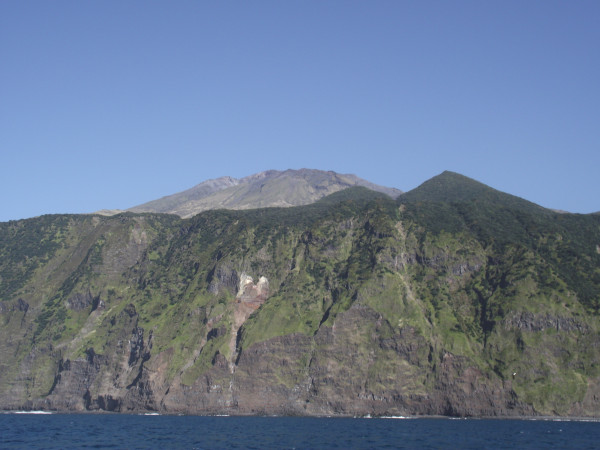 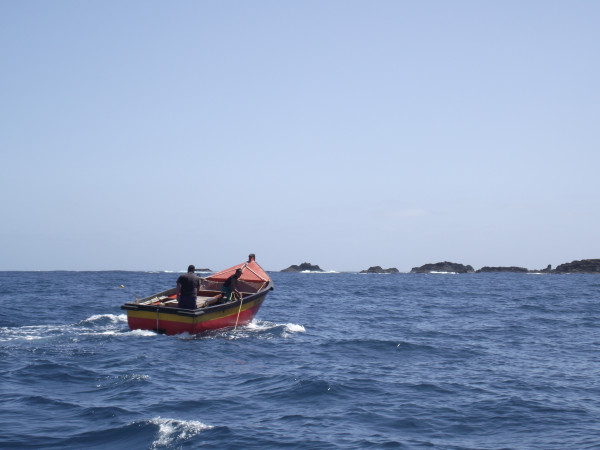 Larry and Andre dropped the lobster traps and then the fishing lines. It was only a few minutes later when they brought the lines in and caught bluefish, steenbras and five-finger (acantholatris monodactylus). They did this about four times and always caught big fish. We only had two large buckets and could have gone on fishing all day if we had the room to put them. We had to leave the rest of the space on the boat for the lobster. The lobster specific to Tristan is jasus tristani yet locally known as crayfish. As we encircled Tristan we met up with all the bright orange fishing boats and pulled up close as they offloaded their trays bursting with lobster. I helped out by hooking the boats with a gaffe while Larry steered and Andre lifted the trays onto our boat. I was glad to be of some help other than just an observer. I could at least say I helped out. We had around sixty trays and headed back to the harbour to offload. It was 2:40. The smaller harbour crane lifted the trays off and then they were delivered to the fish factory. The empty trays were brought back and we took them out for a second run. 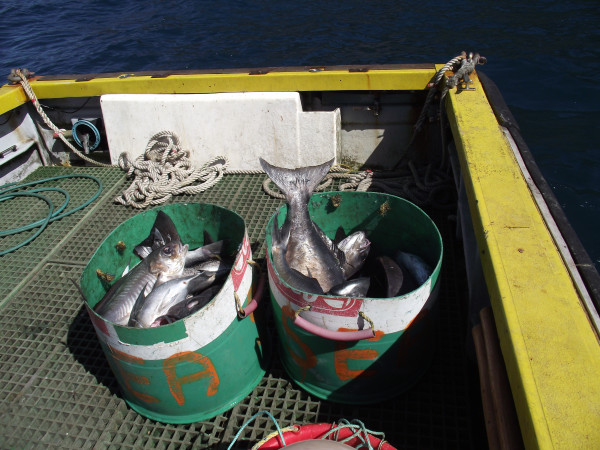 Our haul of some really big fish 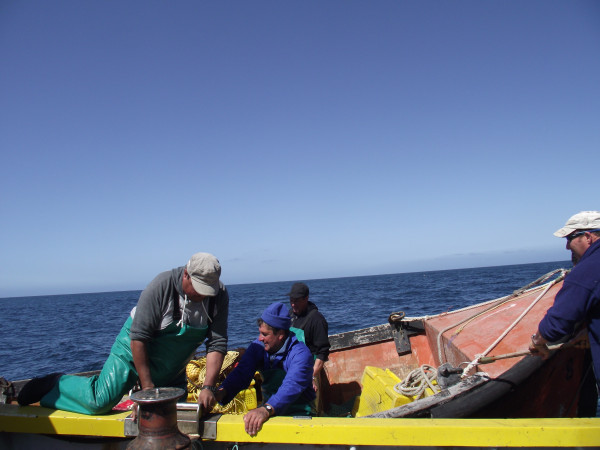 Andre hooking the boat while Mark Swain stabilizes it as Larry hops in to do some repair work. Martin Green is in the background. I would help out hooking other fishing boats during the offloading of their lobster trays. 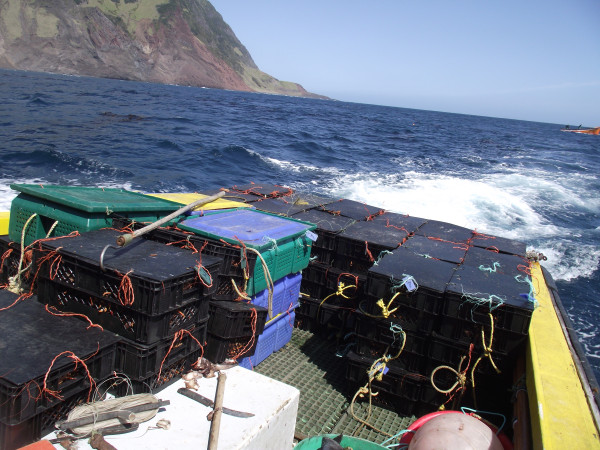 Full lobster trays with the gaffe on top The April landslide occurred here. The grey stripe down the middle of the mountain shows how extensive it was.

On our second trip we pulled up our own lobster traps. Larry emptied them and examined the lobsters for length. Tristan cannot harvest juveniles and in order to maintain a sizable population they throw the young lobsters back. The fishermen use a caliper to measure the bodies if sight alone cannot determine the lobster’s age or length. On three occasions an octopus had entered our traps. An octopus will scare away the lobster no matter how tempting the bait, and one of our traps was practically empty.

We went as far as Sandy Point on the “3 o’clock” side of Tristan’s east coast, then headed north again around the settlement to Hillpiece. By the late afternoon the winds were rougher and waves splashed over the boat. That is why the other fishermen wore waterproofs, both pants and hooded jackets. Neither Larry nor Andre did, because they could shelter themselves behind the boat’s windshield. I joined them as I would have been drenched if I remained sitting in the back.

By the time we returned to the harbour at 6:40 it was eleven hours and fifteen minutes since I had first stepped into the boat. My coat, pants and face were coated with salt. I licked my moustache and tasted the south Atlantic. I am glad I wore my rain boots and not running shoes. I had taken a seasickness pill before I left yet had no coffee, as I usually drink two cups every morning. To consume that drink–both a laxative as well as a diuretic–prior to an all-day ride in a basic boat without a bathroom would have been…not nice. I was fine.

As I click through my photo card I see that I have created a slide show of my trip around the entire island. Today was indeed the highlight of my trip.