One year ago I reorganized my personal library and left no books on the floor. One year after I wrote about it, I am proud to say that my library still looks the same and all new books have found their proper place on the appropriate shelf.

My record albums and Beatle books were my next tidy-up project. I had accumulated many new vinyl LP’s and instead of filing them away I left them sitting on the floor next to my album shelves. Not to file them away immediately is just me being lazy; filing a new album is not as daunting a task as finding a place for new books. My albums are arranged in a much simpler system, whereas I file my books according to subject and that often necessitates a much larger move, hence my term The Great Book Shift as I usually have to shift everything if I have no room on a particular shelf.

I have lived in my house for eighteen years and I recall cleaning this entire record collection only once. Dust accumulates on the top of each plastic record sleeve and clouds even the spine. I needed to take each album out and wipe the edges and both sides of the sleeve clean. I was armed with a shopping bag full of clean dustcloths to ensure I wasn’t transferring more dust with old cloths. Every ten albums or so I had to wash my fingers, as my index finger and thumb would turn black.

During this job, which took me two weeks, I listened to albums and cassettes on my new console which I keep upstairs. I hate to admit it but I confined my listening pleasure only to music that I had never listened to before. Some albums I had acquired in the late 1980’s and thus have spent over thirty years on my shelves–living in three different homes–before I finally placed them on a turntable. I also made some quick assessments of albums and on-the-spot decided to purge over forty of them. One criterion that was an immediate cause for dismissal was whether or not I would ever play an album on account of its condition. I had accumulated some albums for reasons I can no longer remember. I think they must have been given to me as people tended to dump their old vinyl on me (I was willing to receive it) as they gradually switched their collections over to CD’s. It is easy to recall where I bought an album if I got it at a store or at a record show and just as easy to forget if it came in a box among records I wasn’t particularly interested in. I realized that there were plenty more albums that I could do away with (on account of me owning duplicates) but decided to attend to the task at hand and I plan to reevaluate what I want to keep now that I have finished cleaning the collection.

I file my albums–and for the sake of this post I am calling all my vinyl records of 12″ in diameter “albums”, so that encompasses all my 12″ EP’s and 12″ DJ promos [1]–in four adjacent alphabetical series. The first series is Beatles-related; the second encompasses all other artists. The main artists in the former are naturally the Beatles, George Harrison, John Lennon, Paul McCartney and Ringo Starr. I have sizable collections of albums by Julian Lennon and Yoko Ono, who are filed within this series. I also collect albums by artists signed to the Apple and Dark Horse record labels. It is the latter label that is responsible for the alpha of my Beatles collection: the debut album by Attitudes. My Beatles omega is the Apple album by Lon and Derrek Van Eaton.

I have my own idiosyncrasies about alphabetization. For example, the first artist in my collection of albums by artists “other than the Beatles (or related in someway to)” is ABC, followed by Abba. Likewise the three artists I have that begin with U are filed U2, Ultra Bra, then Us3. Movie soundtracks are filed under S and then alphabetically by movie title, unless the soundtrack is Beatles-related, such as El Topo or The Magic Christian. There are a few artists who are filed in both of the two main sections, such as James Taylor, whose debut Apple album is filed within the Beatles-related collection, while a later album such as Never Die Young is filed among “other than the Beatles”.

Albums that are collections by various artists are filed in the next alphabetical series by title. The last series is Christmas music. Both of these final two series are rather small. 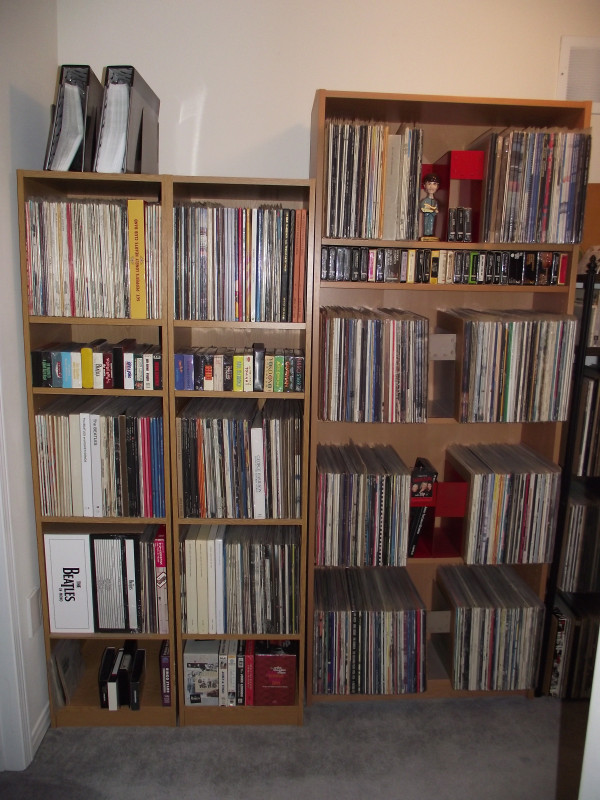 The first shelves you see when you walk upstairs. The Attitudes album is where it all starts on the top left. 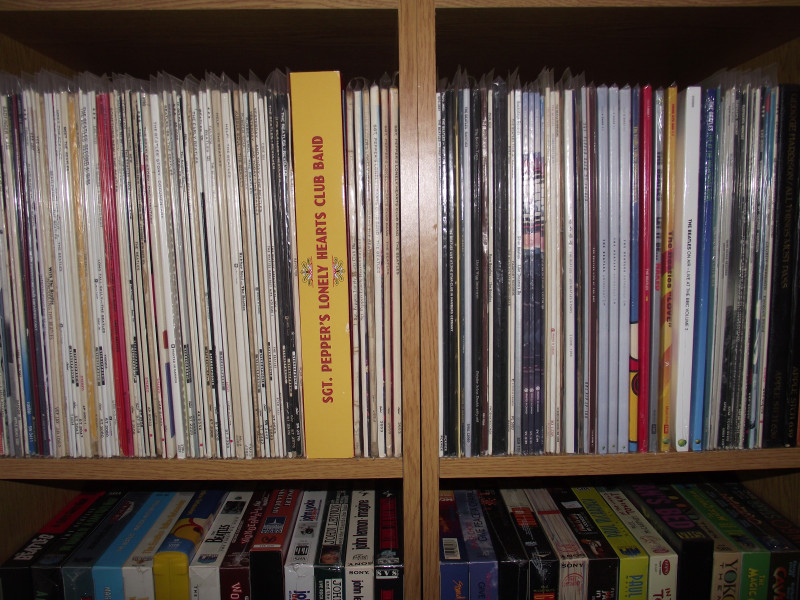 Close-up of some Beatles records. The collection sequence does not stretch across to the second set of shelves. I have more copies of Sgt. Pepper’s Lonely Hearts Club Band out of frame on the second row of the left shelf. 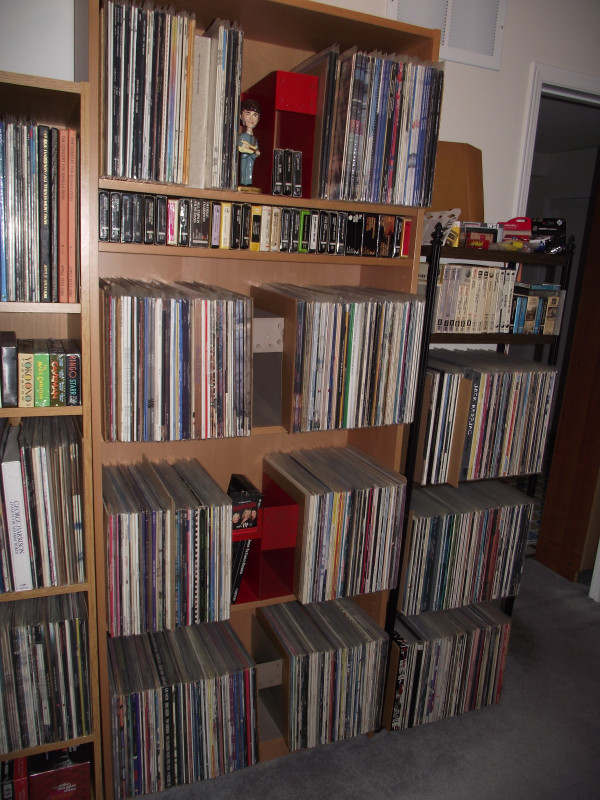 The collection continues, moving from bookshelves to a single metal shelf. 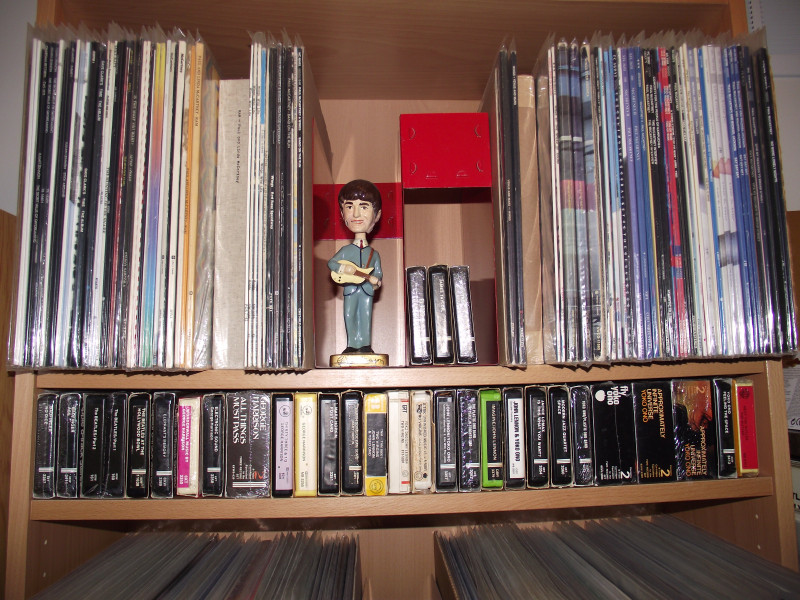 Over the years this top shelf had sagged so much under the weight of a full length of albums that I could not remove the 8-track tapes from the middle of the shallow shelf below. Fortunately I had a spare shelf for this case, and replaced it. I decided to add spacers in the middle of these long shelves, both to disperse the weight as well as to prevent the whole shelf of albums from flopping over to one side whenever I pulled an album out. It is so easy to manage albums if the shelves are shorter. Plus I now have the room to afford so much leeway. 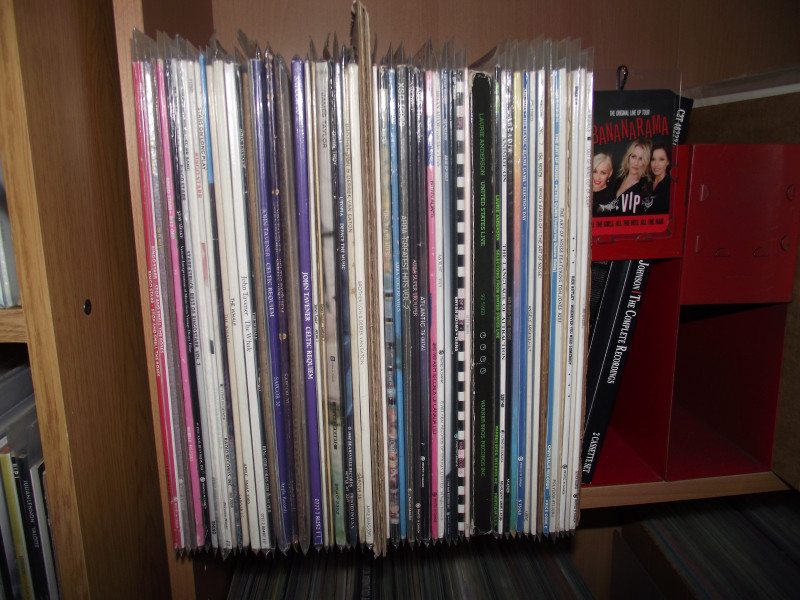 Close-up of the end of my Beatles and Beatles-related section and the beginning of “everybody else”. 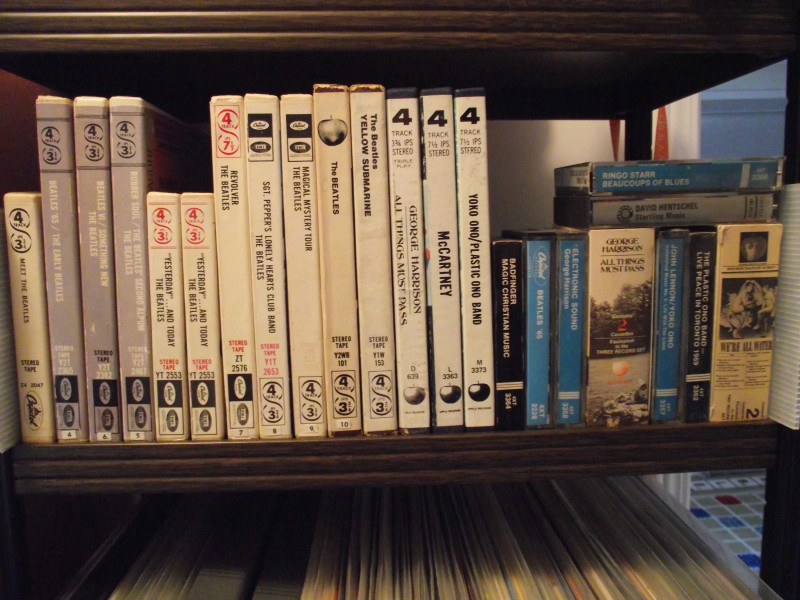 My reel-to-reels and rare cassette tapes. Ultra Bra on vinyl! I have the complete collection. 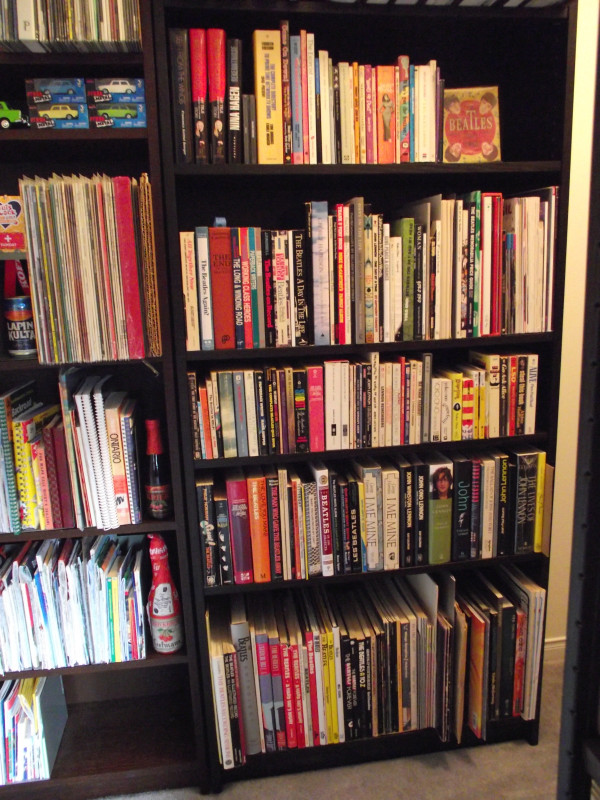 All but the top shelf is devoted to Beatles books. I hadn’t consolidated the open shelf space since I embarked on my Beatles book project. Thus once I had read a book and parted with it, the remaining books stood on half-filled shelves. No books are on the floor and I have extra space.

[1] Thus my album shelves are composed of discs of a certain size. I have a few records however that are in oddball formats, including 10″ discs and 45 rpm singles that are shaped picture discs; these too are filed among the albums since they will not fit on my special 45 rpm shelving (and my next project is to assess that collection).