Cod: A Biography of the Fish That Changed the World 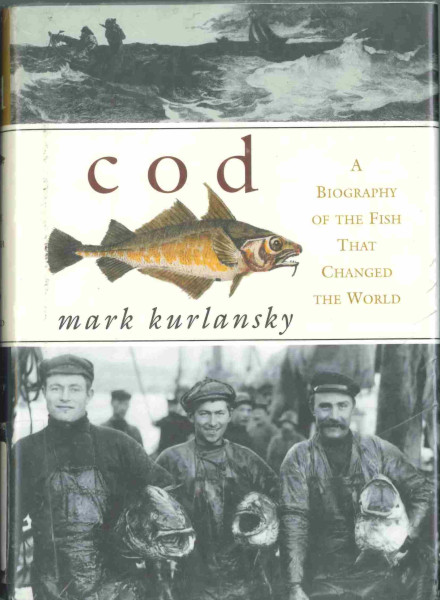 I never know what interesting book I might read next. In my pattern of alternating personal books with library books, my library tastes are all over the Dewey map. I could read a book by Duran Duran’s bassist then follow it up with a book about cod. Yes, as in Cod: A Biography of the Fish That Changed the World by Mark Kurlansky. I had already read two books by Kurlansky. The first was The Basque History of the World from 1999 which was long before I started to write reviews. Earlier this year I read Salt: A World History from 2002. Cod predates them both, as it was written in 1997. I could see the thematic similarities in each of the three books, and now that I have read Cod, I could tell how Kurlansky progressed first from writing about the fish, then to Basque traditions which included fishing for cod, and finally to the method that the Basques used in order to preserve the fish: salt.

Kurlansky is an excellent storyteller, who can make a school of fish seem like a hot topic. I could not put Cod down, and read the book from cover to cover, including the final chapter devoted to forty pages of cod recipes. The addition of recipes is typical of Kurlansky, as I recall Salt had recipes and The Basque History of the World featured many from the Basque kitchen. Cod played a vital role in the advancement of trans-Atlantic exploration. Who living in North or South America today would have thought that cod would be the reason they are there now? For it was because of dried and salted cod that crews could sustain themselves across long oceanic passages. The Basques made countless trips to North America before Columbus because:

“They were able to travel such distances because they had found huge schools of cod and salted their catch, giving them a nutritious food supply that would not spoil on long voyages.”

However the Basques were not alone in their pre-Columbian expeditions across the Atlantic. Norse explorers settled on the island of Newfoundland over a thousand years ago:

“How did the Vikings survive in greenless Greenland and earthless Stoneland? How did they have enough provisions to push on to Woodland and Vineland, where they dared not go inland to gather food, and yet they still had enough food to get back? What did these Norsemen eat on the five expeditions to America between 985 and 1011 that have been recorded in the Icelandic sagas? They were able to travel to all these distant, barren shores because they had learned to preserve codfish by hanging it in the frosty winter air until it lost four-fifths of its weight and became a durable woodlike plank. They could break off pieces and chew them, eating it like hardtack. Even earlier than Eirik’s day, in the ninth century, Norsemen had already established plants for processing dried cod in Iceland and Norway and were trading the surplus in northern Europe.”

Yet Kurlansky has a soft spot for the Basques. So do I, in fact, yet in regards to their exploits at sea, the Basques reigned far and wide:

“The Basques, unlike the Vikings, had salt, and because fish that was salted before drying lasted longer, the Basques could travel even farther than the Vikings.”

The Basques kept many secrets to themselves, including of course where their people came from, yet they never divulged the location of their mysterious cod supply. They likely sailed to the area now known as the Grand Banks. Once this location was discovered in the 1500’s, the Atlantic Ocean was wide open. There was no idea of depleting the stocks much less thoughts of conservation. Ships would fill themselves up to the point where they came perilously close to submerging. As ship technology developed, likewise the cod catch increased:

“Steam ships with otter trawls were reporting catches more than six times greater than those of sail ships. By the 1890s, fish stocks were already showing signs of depletion in the North Sea, but the primary reaction was not conservation. Instead North Sea fleets traveled farther to richer grounds off of Iceland.”

I found Kurlansky’s excessive use of off of to be distracting. This is more an American idiom than what we say or write in Canada, which is without the of. I could have let this matter go however Kurlansky used it to annoying excess; in one single paragraph I counted the superfluous of after off five times, as in “In the dark waters off of Iceland” and “the cod off of Massachusetts”.

Cod catches were becoming noticeably smaller at the start of the twentieth century:

“Were there any limits to how much could be caught, or was nature inexhaustible, as had been believed in the nineteenth century? Fishermen were beginning to worry.”

The two World Wars gave all fish stocks a chance to replenish, as fishing ships were taken out of service and reassigned military duties. Thus only one country in Europe was left to continue fishing: Iceland:

“For six years, it was the only major fishing nation of northern Europe.”

These years gave Iceland a sustained sense of confidence in its new independence. Iceland felt young and powerful. It proved to be the mouse that roared when it declared its fishing limits to be extended into international waters. Over a period of twenty years, these limits were extended bit by bit, causing conflict among the other north Atlantic fishing nations. This time has become known as the Cod Wars, where Iceland faced off versus Europe:

“The Icelandic government was shockingly tough. It refused to allow injured or sick British seamen into Iceland unless they arrived on their vessel, which would have meant surrendering the trawler. It blocked British NATO planes from Icelandic air traffic control and even threatened to cut diplomatic relations. Unlike Britain, Iceland depended on fishing for its entire economy; fishing was the miracle that had lifted its people from the Middle Ages to affluence. Despite a history of warm feelings between the two nations and a close alliance, Iceland was not going to yield on its only resource. NATO, concerned about this conflict within its ranks in the middle of the Cold War, began pressuring Britain to back down.”

“Negotiations were also intense. ‘The Icelanders are, by any standards, very difficult to deal with,’ reported the London Financial Times. Iceland was not going to compromise. At one point, the nation actually severed diplomatic relations with Britain.”

Cod had plenty of Canadian content, as no book on this fish species can exist without mentioning Newfoundland and the Canadian moratorium on fishing in the early nineties. Kurlansky however was quick to label the Newfoundlanders as ignorant where they considered themselves blameless in regards to stock depletion:

“Whatever steps are taken, one of the greatest obstacles to restoring cod stocks off of Newfoundland is an almost pathological collective denial of what has happened. Newfoundlanders seem prepared to believe anything other than that they have killed off nature’s bounty.”

The fishermen know it all too well, and many are pessimistic that the cod will ever return. Cod ends with a warning about greed and the fallacy that the ocean is a bottomless watery pit of riches:

“It is harder to kill off fish than mammals. But after 1,000 years of hunting the Atlantic cod, we know that it can be done.”