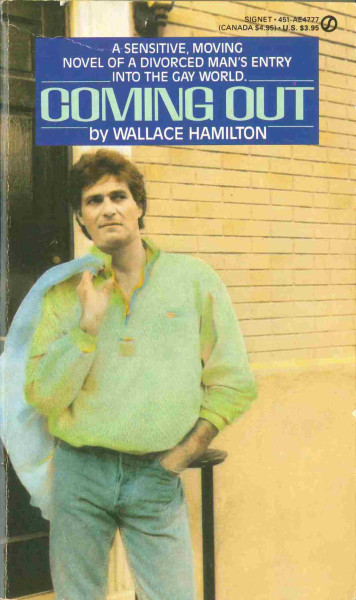 I read Coming Out by Wallace Hamilton during World Pride week, which just ended yesterday with the fabulous five-hour World Pride Parade. This novel, from 1977, is an unfortunate dinosaur in gay literary history. It tells the story of newly divorced Roger Thornton, a womanizing architect in his mid-forties, who falls for a gorgeous 21-year-old named Michael. I was struck at first by the novel’s dedication. It was identical to the dedication in the last book I read, What’s Wrong with Homosexuality? Both books open with the simple words “for Mark”. Coming Out can be described as typical for its time, as it was filled with negative stereotypes of gay men. “Faggot” was used excessively as a mutual term of self-loathing; I did not feel that Roger and his friends were using that epithet with the intention to proudly reclaim the term by desensitizing it. Hamilton, who has written quite a bit about the gay New York scene, wrote about what he lived, and in the mid-seventies, gays were supposed to live miserable lives. Bars were places to go, not to be happy by getting away from their sorry lives, but to gather and wallow in their shared misery.

Roger met Michael while they were both living in the same New York City hotel. Hamilton portrayed them as inseparable and deeply in love, but the interplay between them was lacking. I felt that they barely got to know one another by the time they made arrangements to move in together. The evolution of their relationship progressed far too fast, with each man expressing intense feelings for the other while the reader sat wondering how they could even know each other in the first place. It would have been more realistic if Michael, who was young enough to be Roger’s own son, had taken on a leadership role and shown Roger the gay New York scene.

Roger and Michael befriend a lesbian couple, where one of the women had led a previously heterosexual life and had a husband and two-year-old son. The lesbian love between Jan and Grace was portrayed in a more positive light than the love between the two men. Grace thought:

“What she and Jan did…well, that was love. But what men did? All she could think of was a bunch of awful little boys doing nasty things behind the barn.”

I was irked by the references to child molestation, and how Grace worried whenever Michael played with her toddler son Sandy. If there’s one stereotype that gets me worked up the most, it’s that of gay men being pedophiles. Such preconceptions must have run rampant in the mid-seventies, yet only make me want to throttle those who think that way today:

“This…this thing that Michael had, was it contagious? Could Michael communicate it? Could Sandy pick it up, like tuberculosis or typhoid? Would Michael molest him? She’d heard about that–how queers molest children.”

“Grace–I could see the look in her eye, like I was gonna rape Sandy or make off with the liquor or put the buzz on Jan.”

The dreary lives of gay men got to be a burden and I loathed reading references to yet another gay stereotype. Forty years ago serious thought might have been given to changing one’s sexual orientation through psychotherapy. Grace felt this way about Michael:

“She wondered how he got that way. Hadn’t his mother told him? Hadn’t his father sat down and had a man-to-man talk with him? Had they sent him to a doctor to try to get him cured?”

And Michael himself seemed to dwell on the negative future he faced as a gay man. As he was coming out to himself, his outlook included suicide:

“Michael’s voice grew soft. ‘I used to think that way, too. So help me, I did. And…and I thought sometimes I’d go to California, or rob a bank, or shack up with a fag hag, or maybe just kill myself…'”

And when Roger agonizes over whether or not he should tell his business partner Brayton about his new sexual identity, he worries whether the revelation will cause a scandal and jeopardize their business. Really–a scandal because of a gay architect? That would cause a scandal? Maybe in the mid-seventies, architects were still in the closet. When Brayton discovers the news and tells his wife, his impression of his longtime business partner is nothing less than a colossal insult:

So you can see how a reader in gay liberated 21st century Canada could find himself overwhelmed with depressing stories of urban American gay life from forty years ago. Coming Out does not stand the test of time, if not for its attitudes towards homosexuality, then for its references to contemporary culture. One character, Lola, a drag queen, always quoted from Hollywood’s leading ladies. Only a major film buff would have any idea who she was quoting or what film she was referring to. Hamilton freely dropped names in casual conversation and while I may not be the most cultured of readers, I caught every drag reference from Theda Bara to Gloria Swanson, yet had to look up the relevance of Roger’s reference to Booth Tarkington. There are far more gay novels from this time period that will not leave the reader with a frustrated sense of dread. For not only was the overall negative attitude towards homosexuality a chore to read through, but Coming Out was also poorly written, filled with skeletons of characters who did not deserve the fleshed-out impressions others had for them.