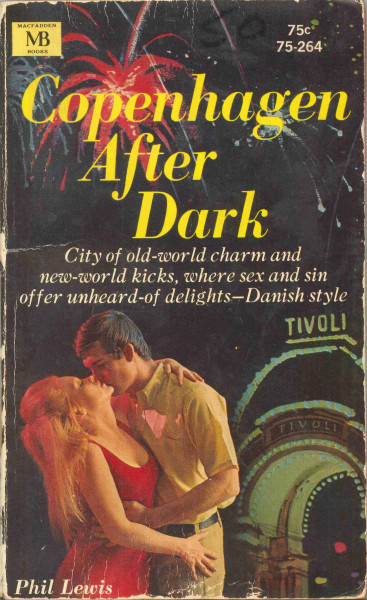 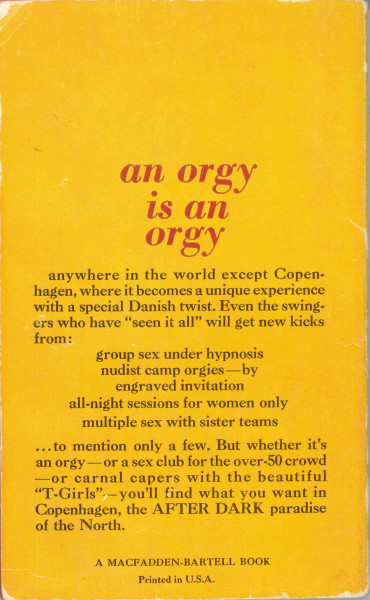 After my last read, the heavy No Nation is an Island, I needed a bit of fluff and decided to break with my Faroes theme. I am still however staying within the kingdom of Denmark by reading the pulpy exploitation study Copenhagen After Dark by Phil Lewis from 1969. Months ago while looking at the discarded library donations I literally pulled this out of the enormous recycling bin. I don’t have a habit of diving in Dumpsters to look for books, but I saw “Copenhagen” on the cover and since I will be in the Danish capital in early July it struck my attention. When I realized what kind of book it was–a jackoff book disguised as legit scientific research–well then of course I had to read it. My blog has featured similar blue pulps, such as Lesbian Masochist, Deviation: A Study of Abnormal Love, Delinquent Delights, Incest: A Psycho-Behavioral Study and Sex & Love Among The Poor. Before I embark on my next reading assignment I wanted to see what swinging sixties Copenhagen nightlife was like and so into the dark I went.

When I opened the book someone had written “Alfred Jørgensen Lab / Office Copy!” inside, opposite a list of six page numbers and citations on the inside cover. Could this book have been used by a legit doctor, psychiatrist or sexologist, or was someone pulling my leg before dropping it off at the library? There is no real need to critique a collection of titillating quickie jackoff stories, but some of the language and storylines will leave your eyes locked in a heavenward position, such as:

“I discovered, via the scuttlebutt grapevine, that one of the better known blue film actresses was a nymphomaniac. After finding out who she was, I got her to consent to an interview.”

“While we’re on the subject, another scorer’s paradise is Wonder Bar over on Studiestraede. The standard operating procedure here is to walk in, sit down and start talking. If you make an acceptable hit, chances are she’ll invite you up to her place for a glass of schnapps and a profound discussion about literature, art and the Middle East crisis.”

“The atmosphere was warm, intimate, and had about it none of the controlled hysteria that I had expected to find.”

So Danish gay men must have been too vanilla for his expectations.

Fennophiles would be offended by the episode depicted in “Amateur Night”. For Finns, the sauna is a revered place. There is none of the sexual innuendo that other cultures associate with it. The Finns even have a saying that translates to “the sauna is like church”. To talk about hanky panky in the sauna would be a grave offence to any Finn. Thus I cringed when I read the following:

“In true Finnish fashion, the boys dragged the two lovelies out into the snow and made love to them there. ‘And then we went back into the shack and…’ She paused; a gleam crept into her eyes.
“‘And what?’ I asked excitedly.
“‘We did it again.'”

I wanted to read this before my trip to Copenhagen so that I could leave it somewhere in the city when I am there. I was delighted to see a mini free library on every floor of the Reykjavík hostel I stayed at three years ago. Maybe my Copenhagen hotel will have a mini free library as well. Yet I wonder what the locals might think if they see this book about their city? Will they shrug it off or take it to read for themselves?

Mark and I stayed at the Hotel Windsor in Copenhagen the night of July 10. On the following morning during breakfast I left the book on a shelf among a selection of pamphlets about the city.]