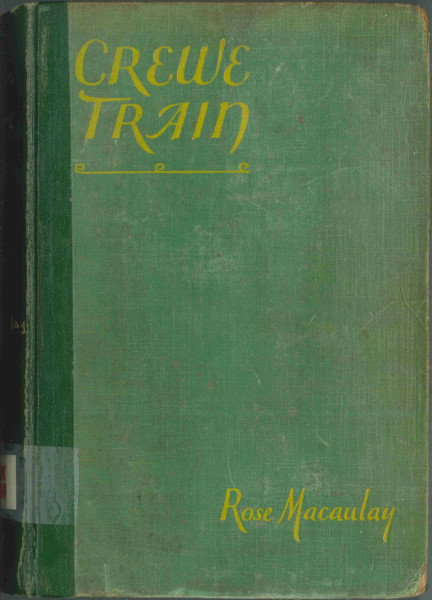 I learned about Crewe Train by Rose Macaulay from references to it in Andorra by Peter Cameron. My library system acquired a 1926 hardcover edition from Brantford Public Library. This book was a charming speed-read, full of realistic dialogue that kept the pages turning. The story focussed on a young woman, Denham Dobie, who was named after her mother’s favourite Buckinghamshire village. Denham grew up in the principality of Andorra yet the book hardly spent any time there. Denham is fiercely independent, loves the country and exploring on her own. She abhors crowds and people in general. I can see how I fell in love with this character. We are two independents who take people literally. Me–to a fault. Denham finds no need to continue, or even have conversations if the topic is agreed upon or is self-evident. Why waste speech by agreeing that it is indeed a rainy day? Denham often instructs her servants not to let anyone in, as she is never in any mood to greet visitors. That doesn’t stop visitors from calling, though. In the later chronological context of “calling”, Denham thinks:

“Telephone. The sort of thing people would invent, so that even being in different houses shouldn’t stop them talking to each other.”

I also identified with Denham because neither of us cares about our own home decor. I have lived in my house for fifteen years and have no intention of ever painting the walls. Denham and I are not party types and we both find it awkward to make small talk in these situations. That explains why I always wait until I am spoken to first before I say anything. So you can see why I found this character irresistible. Macaulay managed to write a novel about a social misfit and made her sound interesting just by being herself.

The major dramas in Crewe Train involve Denham’s struggles with her own preferences versus the big family social lifestyle of her husband and in-laws. She is always at odds with them and stubbornly refuses to be turned into a social butterfly like her sisters-in-law and aunt. After her marriage to Arnold Chapel she did not want to move to London, for her impression of the city was of keen disapproval:

“Denham, with her customary sweeping dismissal of what she did not understand, presumed that Londoners were mostly mad. Obviously, quite obviously mad. They walked along the streets even on the coldest, most disagreeable days, with the slow, halting gait of persons who followed a hearse.”

Yet at the coaxing of her new family, after several embarrassing parties where Denham spent the entire evening stone-faced, she concedes and tries to be more sociable. She is encouraged to strike up conversations at parties by talking about the latest book she had read, yet this attempt, too, backfires. When Arnold suggests she try this, she replies:

“‘The only thing I’ve read lately,’ Denham said, ‘is that book on dog diseases. I could talk quite a lot about Isaac, I think. His coat’s coming out.’
“At dinner that night, when her neighbour said to her, ‘Did you see the Guitrys last week?’ she replied, in the manner of Ollendorf, ‘No, but the hair of my dog is coming out. Do you know the best treatment for it?’
“The young man (whose name was Sitwell) did not, so she told him. She also furnished other information about dogs. He thought it was rather a good game, and when she said, ‘Have you ever had a dog with kidney disease?’ he replied, ‘No, but I have a goldfish with acute neurosis.'”

Denham may well indeed be shy and socially awkward, but she is also selfish, unwilling to spend any real effort to work at her skills at hosting parties. You’d think that in a marriage she would learn to compromise with her husband or cooperate with her in-laws, instead of protesting about attending another luncheon yet again. This selfishness goes far enough to affect her unborn baby, whom she miscarried on purpose:

“No; she had played the fool and deliberately lost the baby because the idea of having it bored her.”

“A child. What an ambition! Denham simply could not understand anyone wanting such an encumbrance.”

After this remark I think I oughta tone it down in my enthusiastic rush to identify with Denham. I wonder if her antisocial attitude is perhaps pathological in nature, for nothing ever seems for faze her. Not even a miscarriage, or her choice to live apart from Arnold because she could not stand London any more. There does seem to be a light at the end of her failing marriage when Arnold agrees to move to Buckinghamshire: thus Denham’s life in England comes full circle. However even this move, one that Denham encouraged, does not make her happy. Even the refurnishing of her new home–the one she expressly wanted–occupied no interest of hers, however:

“Denham was inert and silent through these activities. She felt listless, and did not care whether the bureau stood against the window wall or the opposite one, or whether the Cézanne looked its best over the fireplace or elsewhere, or what the spare bedroom was like (except for an impulse, not uncommon among hostesses, to make this as repulsive as possible, in order to spite visitors for coming to stay).”

Crewe Train is teeming with incidents where Denham battles with the demons of dealing with family and visitors. She would certainly be happy living on her own in a secluded house with minimal fixtures and interiors. (And without risk of giving anything away, this option does become available to her.) Macaulay has created a protagonist and characters whose dialogue mirrors reality. The plentiful dialogue, over ninety years after its first publication, flowed naturally and speedily, and read as if I were eavesdropping on an on-line chat of today. Thus I am led to ask if the author modelled Denham on herself, or if Macaulay was a loner in roaring twenties London. Was Macaulay a young socialite among the London literary set, or did she shun publicity?

An independent woman combined with meddling relatives and a husband who cannot fulfil her needs regardless of what he does all combine to make Crewe Train one of the best novels I have ever read. I will certainly look for more books by Rose Macaulay.