I bought Dakota Days (subtitled The True Story of John Lennon’s Final Years on the covers of the first editions) by John Green when I visited New York City in 1983. The book, a controversial tell-all by John and Yoko’s tarot card reader, had just been released. I had already read the reviews at home: the book was trash. Yet there I was, seventeen years old, a huge Beatles fan and actually in New York. I hung out at the Dakota and visited some of John and Yoko’s local haunts. I justified buying the first American hardcover edition because I was actually there, at the Dakota, so I had to have it. Yet I didn’t read it…until now. It has taken me thirty-five years to read this book. As with The Love You Make: An Insider’s Story of the Beatles (another panned book which also took me thirty-five years to read), my Beatle friends raked me over the coals for buying it. And I didn’t buy just one copy; I bought the large-format paperback as well as the pocketbook. The latter didn’t even come out until 1989. This just shows how voracious I was in the 1980’s to buy all things related to the Beatles, regardless of quality. The covers, both front and back, are shown here.

Green portrayed himself as the omniscient tarot reader who ruled over every aspect of John and Yoko’s lives. They couldn’t function if they hadn’t consulted Green first. He portrayed John–and especially Yoko, to a tiresome degree–of being utterly incapacitated without receiving his tarot guidance. Yoko would call Green at all hours to summon a tarot reading or to demand that he drop everything to come on over. What Green does is paint both John and Yoko as adults without the mental maturity to make any decisions for themselves. Yoko also relied on numerology to an even greater extent. Green wrote that when her guidance conflicted, she always followed the numbers over the tarot.

The story the public has come to believe is that from the period 1975-1980 John retired from music in order to raise his son Sean. He became a self-confessed “househusband” while Yoko took his place at business meetings in a role reversal modern for the times. Green refuted this by claiming it was all a story John wanted to tell the public. The reason John did not record for five years had nothing to do with wanting to be a hands-on father, a role he regretted missing when his first son Julian was born, but rather because he suffered from writer’s block and lost the inspiration to write. In other words, he used his newborn son to cover up the real reason for his musical inactivity. As long as he believed he couldn’t contribute anything to music, he’d tell the press and his fans that he had more important things, like his baby boy, to worry about. John lived like a hermit, cooped up in one Dakota room for over a year.

Everything Green wrote about his intimate role in the private lives of John and Yoko seemed wholly unbelievable. We do know that Yoko ran the Apple business and invested their money–wisely–while John was tending to Sean. Yoko’s investments and negotiations increased the Lennons’ coffers, not bankrupted them. Yoko came from a wealthy family of bankers. She must have had solid advice, as well as her own financial smarts, on how to invest her money. Hokum advice from quack science such as tarot or numerology would sooner bankrupt her than make her rich. At least Green provided a disclaimer to account for his lengthy verbatim conversation transcripts. Artistic licence and not his ironclad memory was the source for such detailed quoted passages. The book is full of such “inspired” lengthy conversations. Surely he could have written a story to incorporate these ideas rather than put words into John and Yoko’s mouths. I wonder just how involved he was with the Lennons at all. A photo section was included but not a single picture taken by or of Green. Not even one shot taken of him with John, or of the inside of John and Yoko’s apartment?

I had to suspend belief while reading Dakota Days from page one. A chapter right out of fantasyland was that about Nora, the South American witch. The author accompanied Yoko to Colombia because she wanted to bring back some of Nora’s magic. Nora had Yoko jumping through hoops doing any number of bogus occult rituals while Nora chanted over her for days. I cannot imagine Yoko doing any of this foolishness. By portraying the Lennons as so dependent on him and the paranormal, he exaggerates his own importance as a legitimate adviser.

John was portrayed as a lethargic weakling who stared at a soundless TV for months on end, like a catatonic quadriplegic. He was reduced to an infant without any capacity to make decisions, relying on Yoko and Green for everything. John and Yoko were supposed to have relied on this card shark to tell them whether or not to travel, or to buy property, or to find out what the other was thinking. Sheesh. What kind of relationship did John and Yoko have, if they couldn’t even ask the other? This is worse than couples today who sit in the same room sending text messages to one another.

I will not be keeping any copies of this book in my Beatles collection. If you want one of them, just ask. 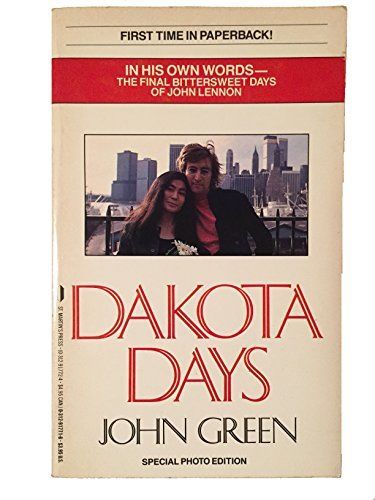 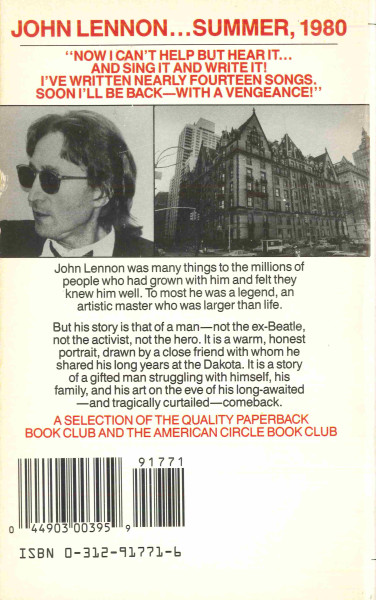 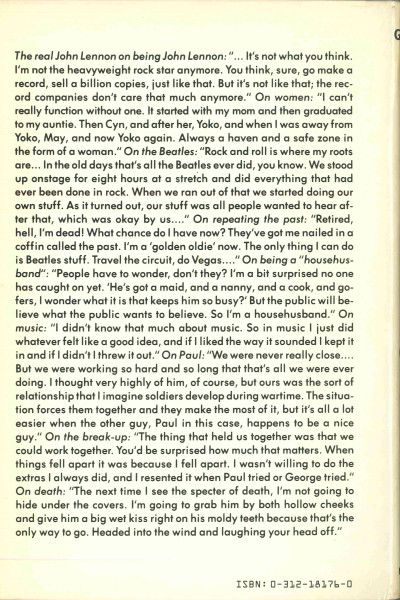