I saw David Bowie in concert on Monday 24 August 1987 at CNE Stadium. I kept a daily diary at the time, and wrote this entry at the end of the day: 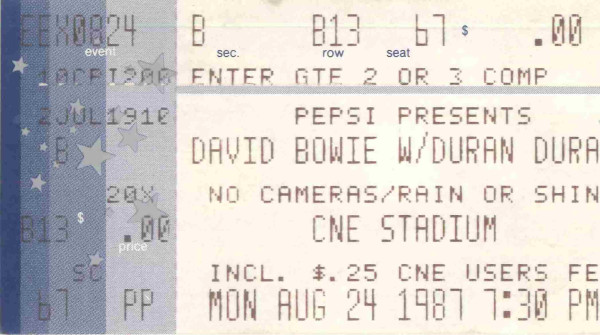 A View to a Kill
Notorious
American Science
Union of the Snake
New Religion
«Meet El Presidente»
Election Day
Some Like It Hot
(Nick’s Interlude)
The Chauffeur
Save a Prayer
I Need Some Money (?)
Skin Trade
Hold Me (beginning)
Dance to the Music (bit)
Hold Me (end)
Is There Something I Should Know
Hungry Like the Wolf
The Wild Boys
The Reflex

[1] I used abbreviations throughout this diary entry, since my diary at the time provided a mere four lines per day. I have written out all the abbreviations here in full, except where the short forms are obvious.

I did not record the names of the Bowie songs, since I was at the concert mainly as a fan of the Northern Pikes and Duran Duran, and thus was not familiar with the names of his material. Note “.00 COMP” at the top of the ticket; my interviewing days saw me attend a lot of free shows between 1983-88.

However that was not really my first David Bowie concert. On September 3, 1983 I watched his concert during the Serious Moonlight Tour. Here is my diary entry from that day:

[2] I had a habit of spelling any noun preceded by “Beatle” as one word, thus Beatlesongs, Beatlealbums.