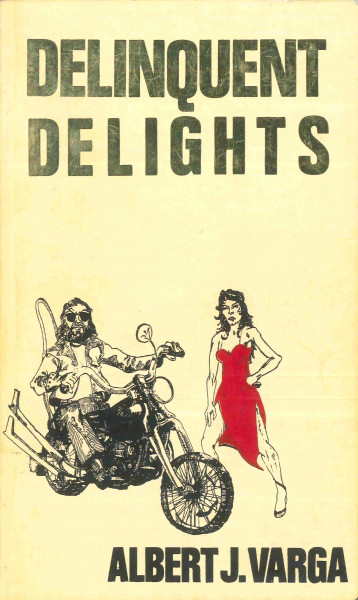 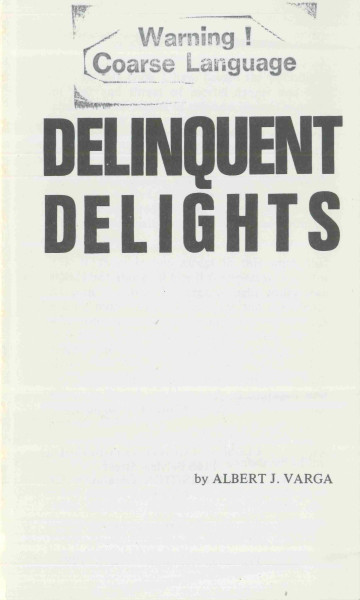 I acquired Delinquent Delights by Albert J. Varga as a library donation reject well over twenty-five years ago. I finally decided to read it, as well as Deviation: A Study of Abnormal Love during a trip to Halifax last week. I wanted to bring along something lightweight that I did not want to keep after I read it, so in my ongoing job of reassessing my book collection, I looked at my small sex-and-drugs exploitation section and decided to part with this. I have a few scary pulp drug paperbacks from the sixties, intended to turn all parents into paranoid detectives looking for symptoms of addiction in their stoner children. Delinquent Delights, however, was written in 1983 and was self-published. It shows. From the lack of a title on the book’s spine to its ghastly cover art (the artist was mercifully not credited), this book went overboard in its amateur presentation. The book tried in vain to pass itself off as a taboo collection of case studies where Varga probed the delinquent underworld. However, from the first page where in all likelihood Varga himself used a garish ink stamp to state “Warning! Coarse Language”, the reader is never titillated or gobsmacked by what these damn kids get themselves up to. Whenever profanity was cited in the text Varga would use both italics and boldface so that we sure as hell wouldn’t miss it. The only effect this produced was that it was all so laughable. What I didn’t find laughable was Varga’s total ignorance of the proper use of affect and effect, as well as a slew of other errors.

I am sure no one but Varga saw the manuscript before it went to press, as the staggering number of mistakes would surely have been noticed by a second pair of eyes. I have read two horrid self-published novels this year and the formatting of the printed page was an utter mess. That author should hang her head in shame that the presentation of her books was so substandard. The same can be said for Delinquent Delights. I mean, what kind of book starts with page one on the left side? The pagination was also wholly wacky in that many pages were simply not even numbered. And who selected the title? The title was poorly alliterative. It sounds titillating yet just because two words start with the same four letters doesn’t mean that they should be paired together. The book was entirely about juvenile delinquents yet the couple on the front cover look like living fossils. I was prepared to find a chapter on quinquagenarian hookers but no such luck.

Varga in his 128 pages [1] analyzes the causes of juvenile delinquency through interviews with gang members. I believe he spoke with genuine drug dealers, thieves, murderers and rapists. The atmosphere of his one-on-ones was just a bit too nice; I couldn’t imagine any of the interviews taking place other than in a controlled sterile environment. In order for any such story to hold the reader’s interest today, the author has to embed himself inside a gang and go on raids or drug runs with them. Varga tried to pass himself off as a gang member’s confidant yet always came across as an outsider.

Spelling errors polluted this book, and for a case study in drugs and juvenile delinquency Varga should have known that the narcotic is spelled heroin and not heroine. He never spelled it the correct way.

An editor would never have allowed this monstrosity:

“It is difficult though, when a youngster moves to a different neighborhood and has to make new friends. Irregardless of this situation, he is going to make friends.”

“Most of their day’s are reserved for criminal activities and mild drug consumption. While their night’s consist of heavy drug consumption and bizarre sexual practices. What do I mean by bizarre? Aside from the regular sexual intercourse, the girl’s engage in ‘fist fucking‘…”

These errors were not quotations made by the long-out-of-school interview subjects. They were written by Varga himself.

Delinquent Delights is a vanity publication that fails to pull off a pulp feel. I sped through this short book on the flight from Halifax to Toronto. I just can’t wait to scan its cover then get rid of it forever. It was a true one-star worthless read and waste of my time. 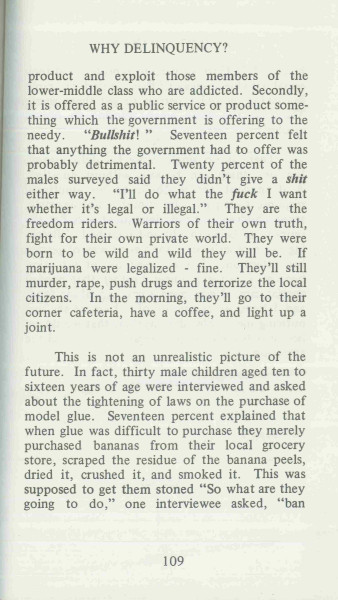