Deviation: A Study of Abnormal Love 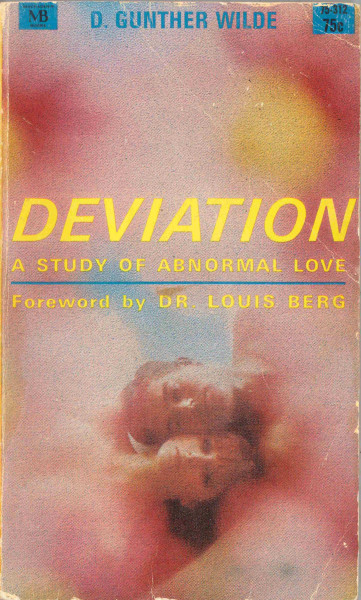 Deviation: A Study of Abnormal Love was written in 1966 by D. Gunther Wilde. I read the second printing from 1970. It is another example of sexual exploitation pulp; see my review of Lesbian Masochist from six years ago to compare. Both books were “written” by authors using the pseudonym Gunther or Guenter. I suppose when compiling a faux scientific study, German names must sound more authoritative. Chapters dealt with such deviations as sadism and masochism, fetishism, transvestism, the orgiast and the wife swapper, homosexuality, prostitution as well as other “deviated practices and misplaced eroticism”. From the viewpoint of fifty years ago, I am sure anything other than vanilla heterosexual sex was regarded as a deviation. Now we are more educated to know that many of these so-called “deviations” are in fact practised by people whom we would consider quite balanced and sophisticated = normal. They might even include our own selves.

However, as with Lesbian Masochist, the whole idea of giving a serious review to this kind of pulp book is ridiculous. This is a jerk-off book for men, who undoubtedly become aroused the moment they start reading the deviant chapters of choice. I acquired this book, among three others, from the pile of donation rejects at the old Central Library in Mississauga. Yes–the old Central Library, so I’ve had them kicking around for the past twenty-five years. I did not acquire them all at the same time, so only got them when four different suburban pervs decided to downsize their book collections. What can I say? Lucky me.

There is no knowledge to be gained from this book. I wrote down nothing in my notes, other than the occasional passage that sounded hilarious, or hilariously unscientific, today. I rolled my eyes as I read the very last line on page one:

“In this thoroughly researched survey, every sexual aberration is explained.”

Every sexual aberration? Really? In only 154 pages? Of course the keyword in a book like this is “exploitation”, for I soon noticed that after Wilde raised some points about certain deviations, he would then roll off several alleged case studies. Yet, none of the so-called “case studies” had anything to do with the psychiatric or psychological analysis presented earlier. Wilde just wrote some pseudo-science about, say, transvestism, then wrote story after story about cross-dressers to keep his reader base beating off. It’s the literary version of porn. Fast forward to the good stuff by skipping the first few pages of each chapter.

I loved the introduction to the chapter on homosexuality:

“There has been so much written on the subject of homosexuality in recent years that it seems almost futile to add anything further.”

This…from 1966! Fortunately Wilde saw the pink light and stated, later on in the introduction:

“In a subject as vast and as old as this one, there is always room for additional comment, especially when it is offered to explain, clarify, or provide information.”

Yet a case study at the end of the chapter dealt with a truly primitive theory as to the cause of homosexuality. A heterosexual woman, Valerie, was living with an “overt” homosexual, Billy, “who affected all the recognizable homosexual mannerisms. He wore tight pants, brightly colored shirts cut to the navel, and he walked with a wiggle and a swish.”

Well whattya know, after living with a flaming poof like this, the pink influence had to rub off:

“After a few months of continuous exposure to this incessant persuasion, Valerie was finally convinced that she was indeed a homosexual.”

It’s that easy to convert people, folks! Now I need to get me some navel-revealing low-cut shirts.

The final chapter summed up other sexual deviations not covered in their own chapters. I particularly liked the single paragraph devoted to “statue violation”, concerning “men attempting to perform coitus with statues. Little more need be said about such persons other than that they are quite obviously mentally ill.” Now statue violation is something I’d like to see. Gotta start lurking around statue parks. But then that would make me a voyeur (which is dealt with in chapter nine).