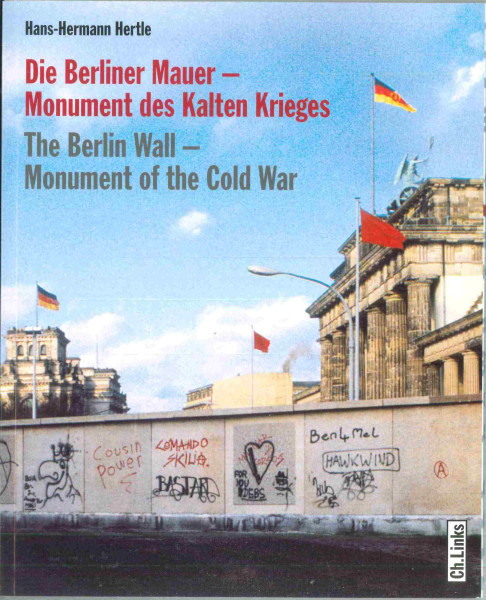 I picked up Die Berliner Mauer–Monument des Kalten Krieges = The Berlin Wall–Monument of the Cold War by Hans-Hermann Hertle (translated by Timothy Jones with photo captions by Katy Derbyshire) while I was in Berlin during the summer of 2010. It is a large-format paperback, resembling an LP record in its dimensions. Hertle filled the book with 184 pages of colour and black-and-white photos chronicling the history of the Berlin Wall. Unlike the previous book I had read about the Berlin Wall Hertle wrote a thorough history with lengthier text, however the charts and insets were printed in a microscopic font that I found difficult to read. All the photo captions were also printed in the same tiny font. The book is a diglot, and as a speaker of German I often switched to the German text just to compare the translation. On the few occasions when I found the English translations particularly awkward the German text provided clarification.

In the chapter entitled “Where the Wall Stood”, Hertle showed photos from the 1960’s and compared them with modern-day shots taken from the exact same position. With the same buildings and camera perspective, one can see how the Wall sliced through the city, dividing it in some cases down the centre of a road or looping around farmland, apparently only centimetres from farmhouses in West Berlin. In the chapter “Building the Wall”, a quote from an East German bricklayer revealed the sense of the mysterious unknown. While the GDR elite may have been in the know about the plans to build the Wall, those who actually built it were often in the dark, not really knowing what was happening around them:

“We were taken to Friedrichstrasse/Zimmerstrasse and then we began to lay bricks under supervision. It was all so confusing. We had the feeling that we were contributing to not being able to see our own relatives. And that was depressing and painful.” Lothar Wesner, bricklayer in 1961.

The chapter on “Escapes–Escape Helpers–Resistance” was particularly saddening, as Hertle wrote about those who were shot and killed or drowned while trying to flee to the west. One entire page was devoted to a shot of Peter Fechter, bleeding to death on the Death Strip. In addition to those whose lives ended at the Wall, Hertle also wrote about the escapees whose perilous jumps from buildings, crawls through tunnels and crashes through barriers brought them to freedom:

“Between the construction of the Wall and its fall, 5,075 GDR citizens succeed in escaping through the border barriers around Berlin, often risking their lives. Many escapees are injured, some of them critically. In Berlin alone, more than 130 people are shot by border soldiers or have fatal accidents.”

One way to travel to the west did not involve risking one’s life. For twenty-five years, the GDR had a sweet little moneymaker up its diplomatic sleeve. The East Germans found that they could be rid of their political prisoners by selling their freedom to the west:

“Between 1964 and 1989, in return for concessions to the tune of about 3.5 billion DM [Deutschmarks], the West German government gains the premature release of 33,755 prisoners, succeeds in bringing 2,000 children over the border to their parents and brings about around 250,000 reunifications. It is still a matter of controversy whether the ransom of prisoners was a humanitarian act or a reprehensible form of human trafficking.”

Once freed, the former prisoners were sworn to secrecy:

“They are constrained to complete silence so as not to endanger future transactions.”

The GDR thus always had a consistent inflow of western money in the form of ransom, provided they kept locking up their own people in order to sell their freedom.

The chapter “The Fall of the Wall” detailed the protests in East Germany that led the government to grant more freedoms to its citizens by way of providing escape routes to the west via Hungary then Czechoslovakia. I can remember the end of the Wall–and eventually, the German Democratic Republic–so vividly. In late 1989 I was in university taking courses in German translation, and the events in Germany provided the class with more interesting topics than the difficulties of translating poetry. Hertle gave me shivers, literally, as I recalled the events that led the Politbüro to open the Wall on the night of 9 November 1989.