#DoNotDisturb: How I Ghosted My Cell Phone to Take Back My Life 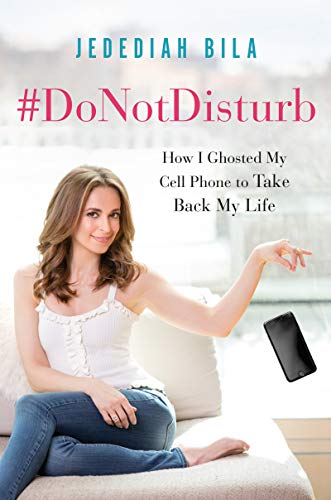 Jedediah Bila wrote #DoNotDisturb: How I Ghosted My Cell Phone to Take Back My Life after she came to the realization that she was spending far too much time–wastefully–poking around people’ social media pages and not living her own life. Messages or alerts from friends of friends and exes of exes would buzz on her phone and she would jump to attention, her Pavlovian stimulus fully charged. These distant people demanded (and got) her attention even though what she got out of their posts or alerts was entirely useless information. Bila would stare into her phone all day and into the night. #DoNotDisturb shares her story of how she got her life back when she turned off her phone. She didn’t only get her life back when she did so: she also got a husband. Talk about a reward for turning off your phone!

I approached this book with the prejudice that I was going to rip into the author and all cellular-obsessed people like she used to be. I still am going to be merciless in my condemnation of 95% of the population as weak and impulsive lazy non-thinkers. I use that percentage based on Bila’s assertion that 95% of the American population now owns a cellphone. I do not believe this figure. I think that Bila just chose the highest percentage she could find when researching how many Americans who currently had cellphones. The larger the figure, the more dramatic the effect. My own opinion–opinion, mind you, not anything based on my own research–is that this percentage is about twenty points lower. In any case, the number of people who have a cellphone far exceeds the number who don’t. And they’re ruining the peace and quiet of those around them.

The disappearance of quiet is nothing new. I work in a public library, an institution that long ago ceased to be an empire of shushing. Our library used to have a no-cellphone policy. Can you imagine anyone enforcing that now? What sound irritates you the most? For me, it’s that five-note high-pitched bird tweet that signals a new Twitter message. I hate that sound. It is too loud, too frequent, and always invasive. As I turn into a crabby old man I have no compunctions telling people who are being too loud on their mobile phones “You have a mobile phone. Be mobile.” I must admit that I stole that line from a TV show. I recall watching Hyacinth Bucket walking around her house with her new cordless phone just because she could. I wish cellphone users would realize they don’t have to be anchored to one spot–like landline users such as myself–when they are having a conversation. Noise, interference, interruptions…all part of the modern world and I realize that fighting it would be a losing battle. Some steps have been made to restore the peace, and I do appreciate the phone-free train cars I have travelled in. Bila however had to come to the realization that she couldn’t wait for other people to design phone-free train cars for other aspects of her life. She had to restore the peace herself. And one way to do that was to go phone-free.

She couldn’t stop her phone use on the spot. She had some weaning to do. First of all she dropped scores of Facebook people (they weren’t “friends” at all) and deleted some apps entirely. Bila grew amazed at how less stressed her life was when she wasn’t devoting so much of her time in other people’s lives. She could appreciate the blue sky, and the different shades of blue within it. She was aware of people, animals, sounds and not centred on her little screen as she shuffled from place to place. It was as if she had discovered the real world for the first time:

“…I now had my eyes open to it all and had made the decision to put my phone away. I was like the sober friend in a room full of drunk people, the only one seeing things clearly.”

Bila had an epiphany when she rejoined the real world and started to live life again in the moment. Her personality and overall outlook changed immediately. She was happy to walk around Manhattan, looking up, not down. She was living life in the moment, appreciating sunsets and not obsessively taking photos of sunsets. She was enjoying the beauty and serenity of sunsets, and not taking selfies with sunsets, or editing or filtering her photos of sunsets before posting them on Instagram. She is not kind to people who seem to let the pleasure of the moment pass them by for the sake of social media:

“Back then, before these digital doohickeys dominated our world, we lived the lives we were living, instead of constantly trying to capture a perfect representation of those lives to post on social media, for us to then check obsessively for views. Or likes. Or whatever. Over and over.”

She has no sympathy for parents who would prefer to watch their children’s concert through a tiny phone screen versus watching the wide scope of the event in an auditorium:

“When I’m at a cousin’s kid’s middle school chorus concert, seeing all the parents there with their phones up in front of them, recording, taking near-constant photos and selfies, texting them, posting them on social media instead of actually listening to and feeling the music, I wonder…is anyone ever actually just where they are at the moment, in the moment? Do we even know how to do that anymore?”

When I saw the original lineup of Bananarama in concert this past February, I was the only person in the front row who was not filming the show on an iPhone. I might be overthinking this, but I did get special attention from Siobhan Fahey, my favourite group member. She smiled at me and gave me the thumbs-up. It could have been in response to me knowing all the words to their songs, but perhaps it was in appreciation for seeing me actually enjoy the show in the moment, and for not preoccupying my attention by recording it. Would I ever watch a video I took of the concert anyway? All YouTube clips of the Toronto concert are of horrible quality. How many parents play back–even once–the cellphone recordings they made of their children’s concerts? They miss the show the first time in real life by recording it, and don’t even bother to see a woeful recording on the narrowest of screen playbacks. It’s one thing if you’re not in attendance at a concert: you’re not there. Nor are you even if you are present, ostensibly watching it in real life in real time, but if you’re recording it all by watching it through a tiny screen, you’re not there either:

“What I find unappealing: when I’m at a performance, and the audience is recording, checking their phones for something, taking a photo, sending it, posting it, FaceTiming their friend in the middle of it all. Awful. How about going back to the idea that–if you’re not there, YOU’RE NOT THERE.”

#DoNotDisturb was a rapid read because it was written in an oral style. Bila even included some dialogues. She used lengthy hyphenated phrases to excess, starting from page 2:

“That said, I’m not one of those I-had-to-walk-five-miles-to-school-barefoot-in-the-snow-uphill militant memorialists…”

and continuing almost to the end at page 233:

While indeed oral stylizations, this superabundance of hyphens was still an annoying sight to stumble across the printed page. I wish the author had restructured her sentences to express the same sentiments by avoiding all hyphens.

Bila answers those who claim they carry a cellphone only in case of an emergency. I get that so-called concern whenever I explain why I don’t have a phone:

“‘But what if I’m needed in an emergency?‘
“Which brings me back to the hundreds of years that people existed and survived without cell phones, emergencies included.”

As a former teacher, Bila is worried about the next generation. Children are growing up using cellphones and laptops while still toddlers. Parents are nose-deep in texting rather than tending to their children. When she was a teacher, Bila frequently had to deal with interruptions in class:

“…the second a phone would buzz or light up, they’d stare at it momentarily, then lose all attention in the project or assignment at hand. Additionally, so many students I taught wound up being on medication for attention deficit disorder. I wasn’t sure if the increase in this diagnosis correlated with the onslaught of devices, but I had a suspicion.”

Her suspicion is bang-on. I do not shy away from debating why I believe AD(H)D is a myth. Tough love from parents by removing their children’s electronic devices will go a long way to save the underused brains of our youngest generation. No one, not just children, thinks anymore. People are not testing their memories or their power of recall. When I walk home from work I am obviously not plugged in. If I’m thinking about something and can’t recall a fact or figure, I try to remember what it is. I test myself to try to recall it. I have twenty-five minutes to do so before I can check the Internet at home. Those who have Internet on the go on their devices would simply type their question into Google and get the answer within seconds. Do they even pause to think about anything? Do they have any skills of patience when the knowledge they want can be found in seconds? This continual state of having immediate information and providing only partial attention severely limits one’s ability to focus, and could possibly also lower one’s IQ.

“It’s been a while since I’ve seen a child hang out in a park, crouched over a puddle after a rainstorm, stick in hand, tracing through the surface area, watching the water ripple toward the edges, thinking, daydreaming. Or a kid on an airplane staring out the window, intrigued by the movement of the baggage handlers coordinating the freight on the tarmac. Nowadays, what do I see? Children glued to big tablets in their hands, clueless to their surroundings, entranced by the make-believe, engaged in a process that pulls them mindlessly along a predetermined trail engineered by some Silicon Valley twenty-something.
“But alas, who am I to judge those kids? I only started noticing so much of the world when I finally put my own phone down.”

Indeed. No one has to totally give up his or her cellphone. Just put the damn thing down. You might–just like Bila–meet your future spouse because you looked up.