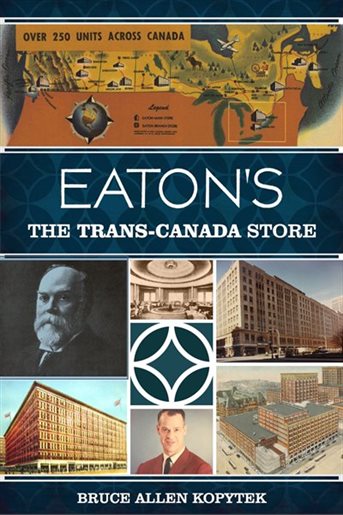 Eaton’s: The Trans-Canada Store by Bruce Allen Kopytek was a weighty paperback about Canada’s preeminent department store chain. At 464 pages, I approached the book thinking that although it would be highly informative, it would nevertheless be a slow read. My first impression was pleasantly disproved the moment I started reading. Kopytek managed to write a lengthy and super-detailed corporate history of the retail giant while maintaining a personal touch. The result was an addictive read, a page-turner, especially since I knew something about Eaton’s and was waiting for the author to arrive at certain parts about the company’s history. The author filled the book with testimonials from Eaton’s customers and employees going back decades, which made the read all the more enticing.

The book started at the time of Timothy Eaton’s birth in 1834 (although the Eaton family tree in Appendix B stated his year of birth as 1843) and his emigration to Canada as a young man of twenty. He was a merchant who built an empire literally from coast to coast in all ten provinces. Eaton’s was not strictly a chronological read, which was fortunate because that would have made it a boring book. The first Eaton’s Santa Claus Parade was held in 1905 yet the chapter about the parade only followed the chapter about store expansion and renovation in British Columbia in the 1970’s. I knew that Kopytek had to write about the Eaton’s parade tradition as well as the company’s decision to cancel the parade in 1982. I just didn’t know when he’d eventually get to it. This element of suspense–as I never rush ahead to peek at the pages to come–kept me on the edge of my seat as I ended each chapter. You could say I was waiting for Santa, and in a sense I was.

I can remember the Eaton’s store on Queen Street in Toronto, and that the Queen subway platform had an escalator that led directly into the store. You did not have to leave the subway station first. If my memory serves me correctly, I remember the synesthetic pleasure of arriving from the subway platform into a bakery. Now wasn’t that a smart idea for greeting customers? What better way to attract customers and to fill their heads with good thoughts than to tempt them with the aromas of freshly-baked goods? Timothy Eaton would have been proud.

Eaton’s expanded from coast to coast, always trying to keep itself modern by updating its stock as well as renovating its premises. What might have seemed like a marketing blunder or over-the-top egotism was the establishment of a second major Eaton’s store in downtown Toronto, merely blocks from its original location. The two stores managed to stay in business for over forty years, until the opening of the major retail colossus known as the Eaton Centre in 1977. Kopytek spent extreme detail on the architecture of each Eaton’s building, whether it was the new Eaton Centre or a suburban mall anchor store. I do not have an architectural background so I had to look up some terms, such as “chamfered corners”, but other structural terminology was satisfied by a photo of the store or design in question.

Kopytek filled his book with photos from Eaton’s interiors, Eaton’s catalogue images and store ephemera. I remember the store’s metallic shopping bag dispensers, often found by the escalators. While one would certainly get a bag with every purchase, it wouldn’t be one of these large shopping bags, which were made of a thicker paper and had U-shaped handles. One year in the 1970’s I fell in love with the TV commercial and jingle “Eaton’s Uncrates The Sun”, and I bought one such shopping bag as a memento. I still have it: I also have a small collection of old Eaton’s boxes, going back to the fifties. I always place these boxes–unwrapped, of course–under my Christmas tree. I decorate “under” the tree until Christmas Eve when I place real wrapped presents there. I always take plenty of pictures of my house all decorated for Christmas and you will see all of my Eaton’s boxes in a photo later this month. I am still decorating my house now. Kopytek included photos of Eaton’s ephemera from various decades. I only wish that he could have included colour pictures as some of Eaton’s themes (green and, at the very end, aubergine) were quite vivid.

In the summer of 1982 Eaton’s announced that it would be cancelling the Santa Claus Parade due to its extravagant costs. The store could not have foreseen the backlash of negative publicity it would receive. What the store did not realize was that people still fondly thought of Eaton’s and knew the store by name as the sponsor. I enjoyed this recollection of the need for having multiple Santas on parade day:

“A dark-blue and red Eaton’s van following Santa carried a second Santa, in case of a problem, along with a nurse and doctor should the excitement of the day overwhelm the parade’s celebrity. In most cases, the backups were not needed, but mishaps during the parade were not unknown, ranging from an alcohol-soaked Santa who announced, ‘Merry Christmas, you little bastards!’ when greeting the crowd assembled to receive him to the sober but no less comical one whose ‘jolly’ stomach, padded out with a feather pillow, had become soaked by rain, causing his pants to drop as he ascended the ladder to the store.”

Yet the downfall of Eaton’s did not start with its cancellation of the parade. Eaton’s ended its catalogue sales in 1976, not being able to compete with rival Simpson’s. In effect Eaton’s “handed over $300 million in sales to its greatest rival.” The writing was on the wall. Consumer shopping was changing and Eaton’s became less relevant with lower-priced retailers and having to fight a reputation that it was a store only your mother (or grandmother) shopped at.

The only criticism I had with the book was that the original newspaper advertisements were reproduced such that their text was wholly unreadable. That’s what happens when you reduce a newspaper page to fit onto the page of a book. I could still read all the original copy with a magnifying glass. I am however most appreciative that Kopytek included so much detail about Eaton’s culled from the nation’s newspapers. He also filled the book with photos of every department store from across the country.

Kopytek ended his book with a timeline of the T. Eaton Co. Limited. It summed up major company events on a single line, but he erred with two dates. I know this, because the dates do not exist:

The last book I read and reviewed was Apron Strings: Navigating Food and Family in France, Italy, and China by Jan Wong, and by coincidence Wong is quoted in Kopytek’s book, where she shared her memories of shopping at Eaton’s in Montreal (known in Quebec as Eaton) and Toronto. I am happy to say that I awarded five stars to Wong’s book as well, and both she and Kopytek wrote to me after I complimented them on each of their books.