Ebola: The Natural and Human History of a Deadly Virus 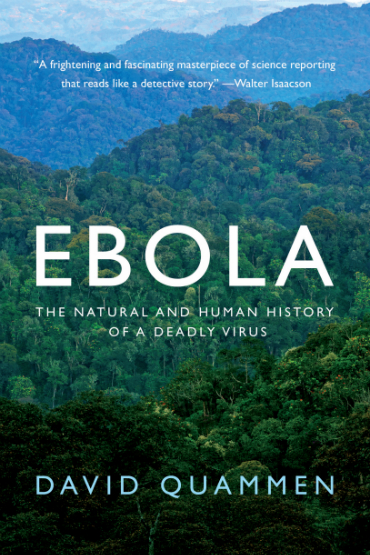 Ebola: The Natural and Human History of a Deadly Virus by David Quammen was a short read about the notorious microscopic killer bug from Africa. I am currently reading a succession of short books in anticipation of a library interloan that could arrive any day from the University of Manitoba. Ebola is the third book I have read about the disease, yet the first since I started writing book reviews in 2010. It was a speedy read, and I learned more from its 111 pages than from either prior title. Quammen accompanied researchers throughout central Africa and interviewed survivors of the disease. It was indeed a page-turner, but without the Hot Zone dramatics (now disproved) of patients’ bodies liquefying and bleeding out. The greatest mystery is finding the host where the Ebola virus incubates. Ebola kills primates and has a high mortality rate in humans. But a virus needs a host to survive, and throughout the book Quammen in his explorations and interviews tries to determine what this host is. There is leading evidence that the host may be various species of fruit bat.

While the most famous strain of the virus was named after the Ebola River in the Democratic Republic of the Congo, there are in fact five known species of the virus. The author cites a scientific paper written by a team headed by Jonathan S. Towner from the Centers for Disease Control and Prevention about the five strains of Ebola that have been discovered:

“Viruses of each species have genomes that are at least 30-40% divergent from one another, a level of diversity that presumably reflects differences in the ecologic niche they occupy and in their evolutionary history.”

Ebola outbreaks have occurred in Africa as far east as Uganda and as far west (and most recently) as the cluster of western nations of Sierra Leone, Guinea and Liberia. Each location experienced a different strain of the virus, and some strains are more deadly than others. One of the risks of working with Ebola either in hot zones where outbreaks occur, on in Ebola research, is that one might unfortunately contract the disease. Doctors and nurses are exposed to infected patients in field hospitals and scientists have contracted the disease via laboratory accidents like needle pricks. Viral researcher Kelly L. Warfield accidentally pricked herself in 2004 and during her quarantine she received the news that she had tested positive. This was suspenseful reading, and Quammen wrote of her deathly anguish. You can almost see her bloodshot eyes darting back and forth as she says:

Fortunately Warfield received a false positive, which was not unusual in certain Ebola tests.

For a brief and balanced analysis of Ebola from its first outbreak in the mid-seventies up till its latest outbreak in western Africa, I recommend David Quammen’s Ebola. In it he debunked Richard Preston’s The Hot Zone, but at the same time was grateful for it. That earlier book scared so many people that scientists received a sizable bump in grants to research the disease.