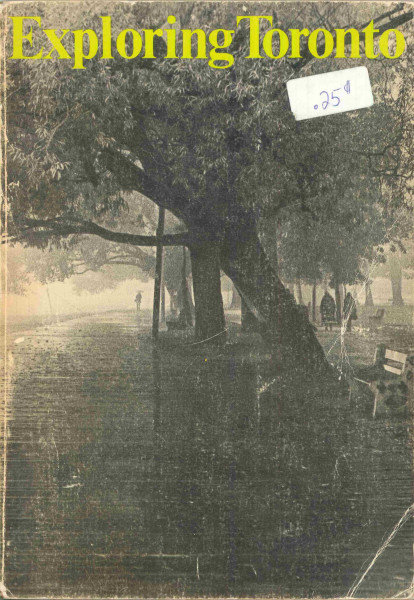 Exploring Toronto is a guidebook written by architects who provided their own walking tours of Toronto neighbourhoods. Twelve different tours were included, with maps, black-and-white photos and highlights to look for from each architect’s point of view. This book was published in 1972 and this is the time when I last lived in Toronto. I am fond of local history and noted dozens of locations. In spite of being a short 126 pages I took three pages of dense notes, almost all of them references to check Google Maps to see if the wrecker’s ball spared some of the addresses given as must-sees. At the time of publication the Spadina Expressway was on every architect’s mind as a surefire way to ruin the city. Fortunately this gash through the heart of downtown was never built.

The cover shows the Beaches boardwalk. I have walked there and know the area yet could not figure where the cover picture was taken until I ran across the same photo within the text. I would have recommended including the shoreline, or even a photo that wasn’t as dark. It was in my opinion an unappealing photo to entice people to take walking tours through the city.

I had the most enjoyable time spending one entire afternoon looking on Google Maps for the buildings matching up to all the notes I had made. I marked which of them were still standing and was pleased to discover that most of them look exactly as they did almost fifty years ago. The following are the highlights from the text and from my own personal preferences:

From the chapter St. Lawrence and Old York by Ron Thom:

“At 37 Sherbourne the third generation of B. B. Smith’s carry on one of the most interesting fur businesses in town–the slogan is “from trapper to wearer”.

Can you imagine that slogan being used today? Outside a furrier?

From the chapter The Toronto Islands by Roger du Toit:

“Many of the cottages around the perimeter of Algonquin Island are examples of an original Island vernacular. They were floated over from the long-gone Hanlan’s Point community, when it was cleared for the present airport.”

I did not know that there was a community on Hanlan’s Point. Makes sense that there was, since there are houses on the other islands, but what really surprised me is how they made their way to their new location.

“Look up the lagoon by the filtration plant and you’ll see the old tall-stacked steam paddle ferry Trillium, which plied the bay during the twenties and thirties. Once Queen of the bay, it is now rotting at its moorings.”

Fortunately the Trillium was restored and is still in service.

From the chapter The Beaches by Jack Klein assisted by Ted Wood and James Smith:

“First on a walking tour of The Beaches is the Water Works itself. You may want to take a conducted tour through, although from the point of view of architecture or general interest, it isn’t very exciting–unless you are hopelessly addicted to potable water. The buildings are disasters both inside and out, and there is not even the end-of-tour enticement that a candy factory or brewery can offer.”

Sounds like a description the current US president would make.

From the chapter Don Vale by Irving Grossman:

“Further east, stroll up the little Wellesley Cottages street, reminiscent of an English village, to find a row of charming one-storey homes built about 1888. Apparently these were originally owned by one person and rented out as low income housing. To find such cottages still standing in a major city is remarkable. May they live long!”

I have biked along the streets in this area and rode to the cottages. Grossman finds them as charming as I do!

From the chapter Along the Escarpment by Colin Vaughan and Annabel Slaight:

“The other truly historic home in this neighbourhood is at 35 Woodlawn. It was built by Chancellor William Hume Blake about 1830. Because it was the first house in the neighbourhood, and now sits not on the street but right in the centre of the block, present owners Mr. and Mrs. Guy Saunders have the properties of twenty-four neighbours completely surrounding them. If you cut through to Walker Avenue via the footpath between St. George Antiochian Church and number 13 Woodlawn you can peek through the gardens to see how the neighbourhood had to grow around the Saunders’ house.”

Fortunately Google Maps can give you a much better look than any sneak peek through the footpath. And there you see it: a large house smack in the middle of the block–no exaggeration–apparently cut off from the roads. There is access via a long laneway off Woodlawn. I definitely plan on using my notes to visit these locations in person.